The Rate Ramp and the Foreign Factor

If you harbored any doubt about the biggest story in the markets right now, then one look at the action in the Treasury bond pits (i.e. interest rates) will disabuse you of that uncertainty.

Recent data on bond outflows show that investors in the United States have been dumping bond mutual funds and exchange-traded funds (ETFs). Outflows so far in August have been pegged at $19.7 billion, which is a big jump in outflows from an already big July metric that showed investors pulled out some $14.8 billion during the month, according to TrimTabs.

The current month’s figure is going to be the fourth-highest month on record for outflows. To put the recent selling into perspective, TrimTabs found that since the beginning of June, some $103.5 billion has exited from bond funds.

The selling in the bond pits has lifted the 10-year Treasury Note yield to 2.84% (midway through Wednesday trade) a level that is just below its two-year high. And while rates are still pretty low when compared to the past couple of decades, the pace of the recent rise in rates indeed has been both aggressive and violent. 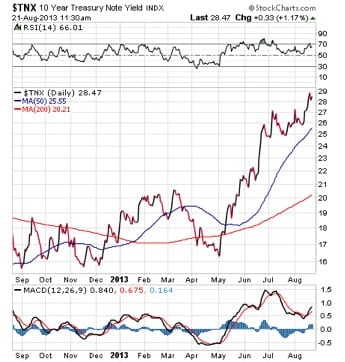 Of course, it is not just U.S. investors who are running for the bond exits. Foreign bond holders also are selling. Recent data indicates that foreign bondholders sold some $79 billion of long-term Treasuries in June. China, the biggest holder of U.S. government bonds, dumped $21.5 billion, while Japan, the second-largest holder, liquidated $20.3 billion in Treasury bonds.

Now is there any doubt that the world is responding to the Fed’s “taper” talk with their pocketbooks?

The selling in bonds and the concomitant rise in interest rates is causing equities to come under fire as well. The chart here of the S&P 500 Index shows the broad measure of the domestic market falling below its 50-day moving average for the first time since June. 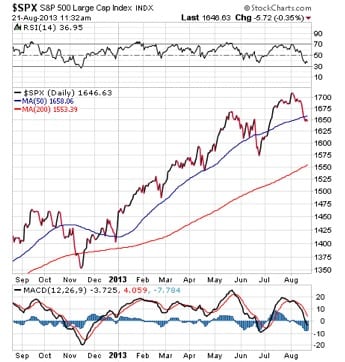 As we are on the verge of September, the historically worst month of the year for stocks, it behooves us to pay attention to what the market is telling us.

That decision, as well as the market’s reaction to it, will let us know what our next move is going to be.

India: The Land of Confusion

It has been a very bad month for India’s stock market. For the past four weeks, the iShares S&P India Nifty 50 Index (INDY) is down nearly 20%, and that selling has been particularly heavy during the past several trading sessions.

So, why has there been such a huge sell-off in Indian stocks?

As my friends at Zerohedge.com point out, India’s “flip-flop” on its recent move to tighten monetary policy (which was designed to stop the rupee from going down any further) has caused mass confusion about just what the heck the policy is at the Reserve Bank of India (RBI), India’s central bank.

After supporting a policy of tighter controls on monetary and fiscal policy, the RBI now has announced it will purchase $1.2 billion in long-term bonds, and institute other quantitative-easing like measures. This schizophrenic move by the nation’s central bank is causing investors to bailout on Indian equities, and I can’t blame them. 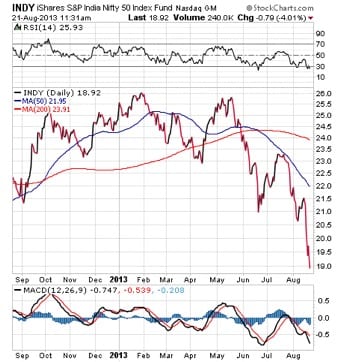 Think about what would happen to U.S. markets if Ben Bernanke decided to “taper” one week, and a few weeks later said the Fed would ramp up its bond-buying program. Chaos would ensue, and the financial markets would go into a tailspin. Well, that is what is happening in India.

I never thought I’d say this, but I am really glad that for all of its faults, the Fed, however cryptic it may be, signals to the market what it’s going to do well in advance. That notice allows us to adjust to the situation well in advance of any monetary policy sticker shock of the kind we’re seeing in India.

It is yet another reason to be thankful we live in the “good ol’ USA.”

“My fault, my failure, is not in the passions I have, but in my lack of control of them.”

Passion is what makes life worth living. But controlling your passions is just as important as cultivating them. When it comes to a healthy life, balancing your enthusiasm and your self-discipline are the dual keys to success.

share on: FacebookTwitter
previous article
Sign of the Apocalypse? Beer Sales Down in Europe; More Beer Bashing: Carlsberg Fingers Russia for Declining Sales; The Calm before the Storm: Fed Minutes Go out at 2:00 p.m.
next article
ETF Talk: Betting on the Iron Chancellor