During the next five trading days, we’ll be saying goodbye to a few things, such as trading during the month of August. Labor Day weekend brings an end to the summer, putting us in the throes of Back to School spending, last-minute vacations and similar activities that will give us low trading volume during the coming week. While it will be a little more exciting than watching paint dry — we do some have some economic data and corporate earnings on tap this week — it will be far quieter than usual. I suspect the market will drift sideways in the coming days before the Labor Day weekend.

Gearing up for September? Once the holiday weekend is past, it’s typically back to business. But in my view, there will be some items weighing on the stock market in the coming weeks. We have to face another round of government shutdown talks, the potential sting in the economic data of sequestration-related furloughs that are happening now and, of course, more Fed tapering conversation. As I wrote in the September issue of PowerTrend Profits, these and other factors had me in a more cautious position for August — I have been far more selective in adding new positions and my subscribers have opportunistically booked some big double-digit percentage profits as we used the last few weeks to add what I call PowerTrend contenders to our watch list.

The watch list. One of the secrets of the Wall Street pros is to have two teams of stocks — the ones you want to own now and the other filled with public companies that you will keep your eyes on. Given the nature of PowerTrend investing, I’m looking at dozens of companies each week. In order for me to put them on my must-have list, they have to not only survive my triple filter process that weeds out the pretenders, the shares also need the prospect of at least 25% net upside for me to get interested. Using that 25% net upside as a threshold helps me deliver big profits to my subscribers, while also avoiding pitfalls.

Investors head back to cash. Given the recent performance and near-term outlook, it is not surprising that investors redeemed the most money from U.S. equity funds in five years. According to data from Bank of America Merrill Lynch, equity funds saw their first outflows in eight weeks, totaling $12.3 billion. Of that amount, $10 billion was from the SPDR S&P 500 ETF (SPY) alone. Bond funds also saw redemptions as investors moved back into cash. During the last few weeks, money market funds swelled by $22 billion in size. 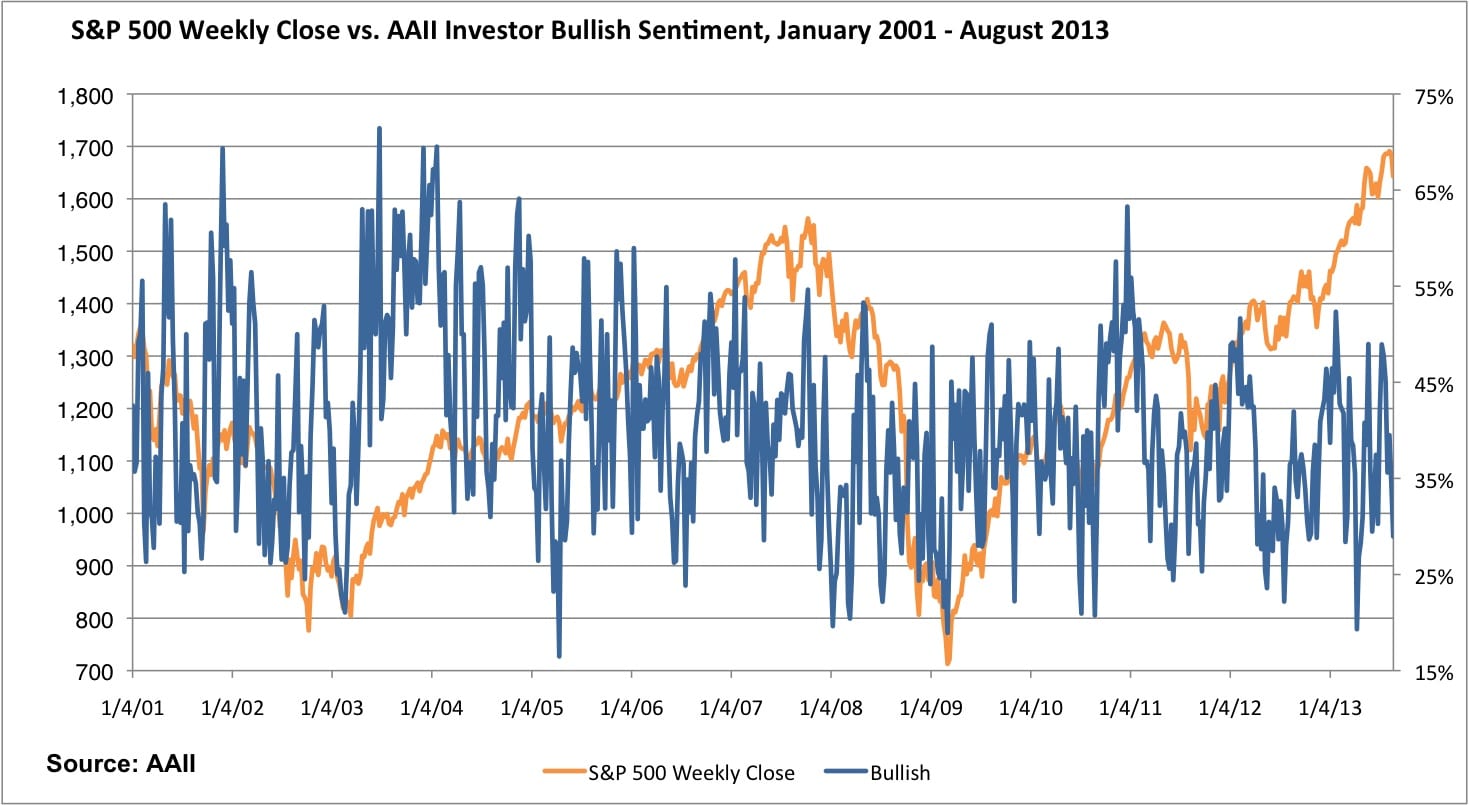 Checking in with the most recent AAII Investor Sentiment Survey we find the degree of investor bullishness has dropped significantly to 29% as of Aug. 21. That mark is well below its long-term average reading of 39.0%. While it’s not a popular thing to say, many view the AAII Investor Sentiment Survey as a contra-indicator, meaning when it’s overly bullish, you should be selling or trimming back positions; when it’s overly bearish, you should be scooping up shares. The reason I watch this indicator is not so much to time the market, but to get a read on the mood of the market. Should the market drift lower and sentiment follow suit, it could signal a buying opportunity ahead as we put several of those near-term concerns I mentioned earlier behind us.

This week on PowerTalk, I’m serving up our late summer reading list. That’s right. The last few weeks of August tend to be filled with cookouts, vacations and lounging by the pool. If you’re doing any of those things, or if you’re like me and you’re not, you still need a good book or two to get you through the dog days of summer. With that in mind, I’m bringing you two books that are great reads in general, but also make for great end-of-the-summer reads.

The first is Niall Ferguson’s latest book — “The Great Degeneration.” Odds are you’ve heard of his other books — “The House of Rothschild,” “The Pity of War,” “The Cash Nexus” and many others, including “The Ascent of Money,” which was the basis for a PBS series that won the International Emmy for best documentary. In “The Great Degeneration,” Niall tackles the decay in four key institutions — representative government, the free market, the rule of law and civil society — that he argues have been the key to success in Western Civilization. We talk about whether or not it’s over for us as a people, and I think you’ll be surprised by what he has to say.

The second book is Conrad Black’s “Flight of the Eagle,” and it’s another great read that traces America’s evolution, discussing key events, strategies and problems along the way. Conrad’s perspective is insightful and informative, but that’s something to expect from him, considering that by the late 1990s, he had more than 500 publications under his banner as he headed the world’s third-largest newspaper group and the largest print-only media operation. Aside from his new book, Conrad shares his outlook on the publishing industry and what he would do if he was charged today with fixing a major newspaper company like The New York Times (NYT) or The Washington Post (WPO). Much like in “Flight of the Eagle,” Conrad’s unique perspective doesn’t disappoint.

Latest Special Reports
As a courtesy, I want to bring your attention to my three latest special reports, Eight “PowerTrends” for the Next Decade of Wealth, Power Plays: Today’s 8 Most Urgent “PowerTrend” Wealth Picks and Double Your Money by Year’s End with the Company Comcast, Verizon and Cisco Can’t Do Without. Each of these reports, FREE to subscribers, gives excellent investment information on a key segment of the market.

In addition, take a look at the latest version of The Top 12 Stocks You Should Buy Right Now, which features three of my top investment recommendations, as well as bonus picks from each of my fellow investment newsletter editors at Eagle. All of these special reports are accessible now to subscribers on my website. To access the website or to subscribe now click here.

previous article
Betting on the Online Travel Revolution — and a New Option Recommendation
next article
21st Century Biotech: Buy the Pipeline; 70 Years of Oil Pipelines Need to be Reversed; Nuclear Industry Takes another Hit in Japan