Last week marked the final days of “summer,” at least in market terms. As expected, there wasn’t much market participation. Now, however, we’ve entered September, historically the worst month of the year for the stock market.

This year, the September scuttlebutt is swirling with rumors, hints and speculation about all sorts of unknowns. Some of these unknowns, by themselves, probably aren’t too big a deal. Others could turn out to be a very big deal. Collectively, the fear factor over a potential confluence of unknowns is what investors are rightly worried about.

The most immediate of these worries is the threat of enhanced conflict in Syria, something that’s already put pressure on stocks, and that’s caused oil prices to rise. For the month of August, the Dow was down a very sharp 4.6%, its worst one-month performance since May 2012. Part of the reason for that sell-off was the Syria factor last week.

While I suspect the Syria situation will have a limited impact on the markets, the threat of escalating tensions in the volatile Middle East should always be a source of worry if you have your money at risk. 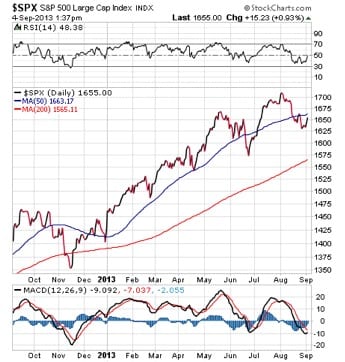 Of course, the biggest unknown facing the markets right now is the Federal Reserve and its decision on what’s come to be known as “tapering” of its massive bond-buying program, better known as quantitative easing.

The markets are in love with the Federal Reserve and central banks around the world, and why not? The easy-money policies of the past few years have been good for bankers, big-money players and individual investors, but what happens when the unwinding of this huge credit bubble kicks into gear?

With so much love, and even faith, in the Fed, I think we are bound to become disappointed in the end. The question is — will you be ready when that disappointment hits?

Now, I don’t know what the Fed is going to do when it announces its decision on Sept. 18. I suspect we’ll see some sort of taper announcement for some time later this year, but how much of a taper, when and how that taper will take place is just about anyone’s guess at this point.

What I don’t think is a guess is that traders — both equity and bonds — have been preparing themselves for a taper event for some time now. Hence the drawdown in both stocks and bonds at various points since May. 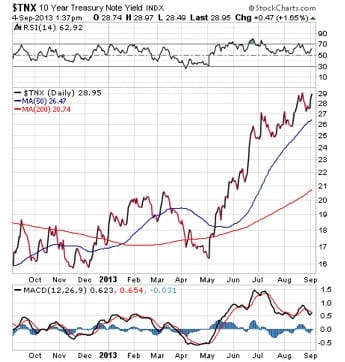 It is my suspicion that stocks will struggle this month in volatile trading heading into the Fed meeting. If that does happen, and particularly if stocks pull back significantly, I ultimately think this will wind up being a great buying opportunity for patient traders holding plenty of cash.

The question then becomes which areas of the market represent the best buying opportunities going into the final quarter of 2013.

To find out what sectors I’m watching right now, and more importantly, to find out when to buy those sectors, I invite you to check out my Successful Investing advisory service today.

Why have emerging markets been hit so hard this year?

If we look at the chart of the iShares MSCI Emerging Markets (EEM), we see that since May, stocks in the space have seen some serious pain.

The biggest reason for that pain is due to the Fed and its signal to the markets that it plans to taper its bond-buying program as soon as this month. But why would Fed tapering lead to a sell-off in emerging markets? 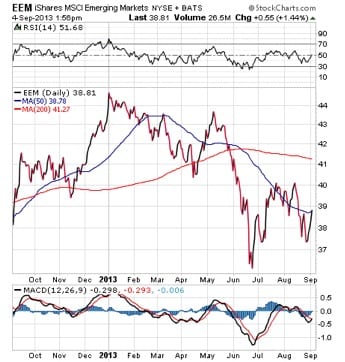 According to PIMCO CEO and CIO Mohamed A. El-Erian, the Fed’s near-zero interest rates and quantitative easing pushed investment capital away from the United States and toward emerging economies. The surge in capital then led to rising emerging market currencies, which led to reduced export competitiveness and secular asset bubbles in those countries.

The action in emerging markets is very important, because I suspect that until we see some relative stability in these markets, I doubt we are going to see a sustainable rebound in U.S. equities. Think of these markets as a leading indicator of how investors feel about tapering, and that should give you a good sense of what’s in store for stocks.

Do you know what’s best for you, or is that the job of someone else? Some feel government should be your parent, and others think they should choose their own destiny. If we are to be a successful country, I think the more power in each of our individual hands to decide what’s best makes much more sense. Of course, more power to decide means more personal responsibility, but I think most people are willing to accept that tradeoff.