September has a reputation as the worst month of the year for stock markets. Throw in the uncertainty surrounding Syria, still anemic U.S. employment numbers and the threat of the Fed’s tapering of bond purchases on Sept. 18 hanging like a Sword of Damocles over investors’ heads, and this September was destined to be next in a long line of poor-performing months.

Yet much to everyone’s surprise, long-suffering global stock markets have taken off like a rocket. Asian markets closed at three-month highs overnight. The MSCI Emerging Markets Index has rallied an eye-popping 7.86% since the start of the month. And four global stock markets have rallied 10% or more just over the past five trading days. A handful of others, including Russia, China and Turkey, just failed to make the cut of double-digit percentage gainers.

Looking at the fundamentals of these economies — well, it’s hard not to call each of these markets a serious contrarian bet.

At the same time, emerging markets have underperformed the U.S. stock market by a degree rarely seen in the past. The recent rally may simply be a case of the inevitable “reversion to the mean.”

The iShares MSCI Thailand Capped ETF (THD) had been one of the top-performing emerging market ETFs of the past few years, and it was up 39.98% in 2012. But after the recent global backlash against emerging markets, Thailand was hit harder than most.

Since May 22 — the day the Fed announced the prospect of tapering — the Thai ETF plunged over 28%, hitting a low of $66.11 on Aug. 28. That drop put Thailand firmly into a bear market. But since hitting that low, the Thai market has rallied 14.7% 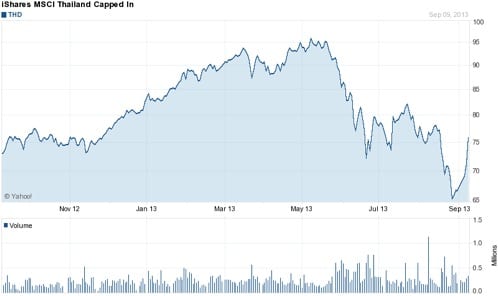 The triple whammy of a slump in its currency, slowing economic growth and fears of the Federal Reserve tapering its quantitative-easing program explains the sharp drop in the Thai market.

Indeed, Thailand’s economy hardly is ship shape. Its economy contracted 0.3% between April and June, following a previous fall of 1.7% during the Q1 of 2013. Two quarterly contractions in a row mean the Thai economy is officially in recession. That is a stark contrast to last year’s strong economic growth of more than 6%.

Even as the Thai market has rallied, Goldman Sachs cut its rating for Thailand from overweight, concerned about the potential for higher levels of non-performing loans as Thailand’s economy slows.

Few global stock markets have attracted more negative headlines over the past six months than India. Political gridlock that put a brake on economic reforms, coupled with a plummeting rupee, combined to make India — represented by the WisdomTree India Earnings (EPI) — the second-worst-performing stock market in the world in 2013, down 20.60%. And that’s even after its recent rally. 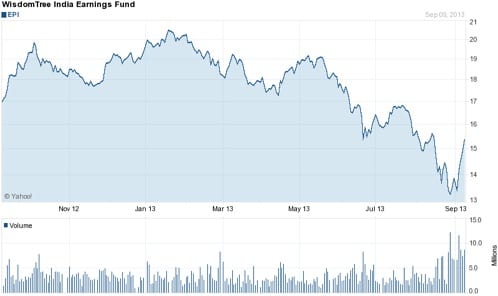 In a terrific example of why you should use magazine covers as a contrarian indicator, Britain’s Economist magazine dedicated its Aug. 24 cover story to India’s problems. That’s almost to the day the Indian market bottomed.

The appointment of Raghuram Rajan, a University of Chicago-trained economist and former chief economist of the World Bank, as India’s central bank chief has lit a fire under the rupee and the Indian stock market. Rajan is introducing reforms to make it cheaper for India’s banking sector to keep dollars with some foreign currency bank deposits. That said, Rajan faces an uphill battle to turn around India’s economy as the central bank likely will keep its liquidity-tightening measures in place to help contain the depreciation of the currency.

Brazil has disappointed investors almost as much as India, a fellow member nation of the BRICs (Brazil, Russia, India and China). After a strong run over the past five years, the Brazilian stock market went from “hero” to “zero,” as its currency plummeted, commodity prices tumbled and demand fell as China pulled the rug out from under its economy.

In a story that rivals that of Icarus in Greek mythology, Brazil’s wealthiest businessman, Eike Battista, whose publicly stated goal was to unseat Bill Gates, Warren Buffett or Carlos Slim as the world’s wealthiest person, lost $25 billion in 2013 alone as his business empire collapsed.

Meanwhile, the Brazilian stock market has battled with India for title of worst-performing global market of 2013. But since hitting bottom on Aug. 28, the iShares MSCI Brazil Capped (EWZ) has rallied 10.63% and is now down only 16.12% for the year. 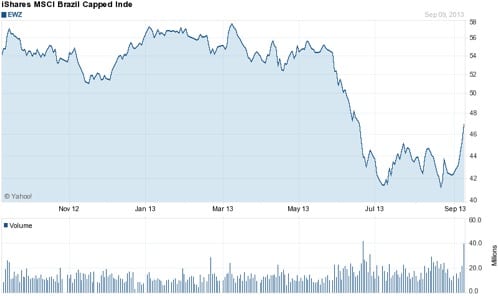 Clearly, investors have piled into Brazil recently to drive the market higher. But truth be told, the fundamentals of the Brazilian economy aren’t great. Inflation is too high at 6%. Too many markets, from electricity to gasoline, remain regulated. And the Brazilian economy is expected to stall after a surprise 1.5% gain in Q2.

Greece is the poster child of European profligacy. While Ireland has bitten the austerity bullet — and investors have rewarded Ireland for it as the world’s top-performing stock market of 2013 — Greece has continued to disappoint investors with its wishy-washy commitment to economic reforms.

The Global X FTSE Greece 20 ETF (GREK) has been a genuine roller-coaster ride, almost doubling at one point from its 2012 low, to collapsing after the Fed’s tapering announcement.
Since May 22, the Greek market plunged 18.2%, bottoming on Aug. 28, before rallying 10.42% in September alone. 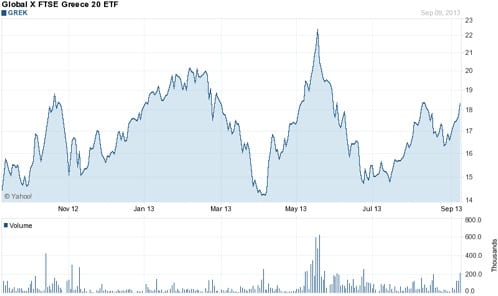 For Greece, it’s a case of the news getting less bad than expected. The Greek economy shrank 3.8% in Q2 — much less than the 4.6% economists forecasted. Greece also may achieve its first-ever primary surplus — a budget surplus not counting debt financing. Despite its progress, Greece remains in big trouble. Gross domestic product (GDP) has fallen 25% since its peak in 2007. Unemployment stands at 27%, with youth joblessness exceeding 60%.