So the Fed Didn’t Taper… Now What?

As we all learned, the Federal Reserve did not taper its $85 billion in stimulus efforts after its Federal Open Market Committee meeting earlier this week. The inaction was quite the surprise, considering the consensus view seemed to be that tapering was about to begin. I differed from the consensus in that I expected a modest initial round of tapering following the disappointing August Employment Report and tepid Federal Reserve Beige Book report. That data showed our economy is still on shaky ground and is characterized by declining work force participation and wages that remain under pressure.

As Federal Reserve Chairman Ben Bernanke made clear this week, the Fed will continue its highly accommodative policies at least until the U.S. economy hits a 6.5% unemployment rate. In his prepared statement shared on Wednesday, Bernanke explained that committee participants in aggregate see “the projected unemployment rate for the fourth quarter of next year encompasses 6-1/2 percent, 12 of the 17 participants expect the first rate increase to take place in 2015 and two expect it to occur in 2016.” As you probably know, the stock market took the news of continued sugar stimulus very well — to the tune of a more-than-145-point move in the Dow Jones Industrial Average after the news broke. What you may not know is Bernanke’s comments also served to push the 10-year Treasury yield down sharply. 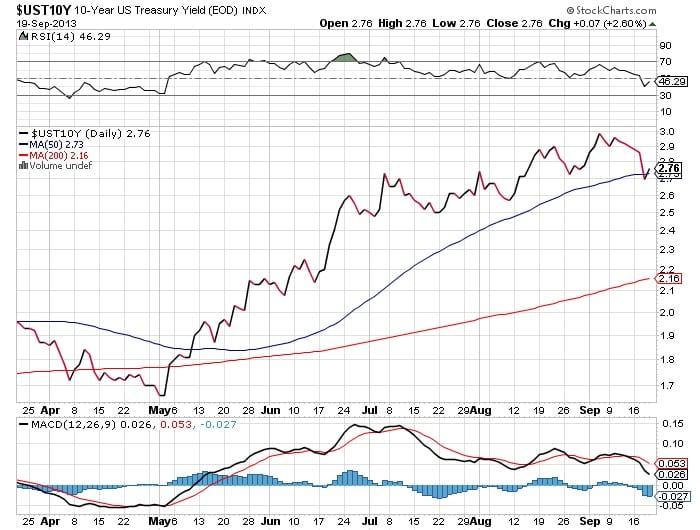 Debt ceiling vs. government shutdown ahead. What caught my ear most in Bernanke’s remarks was the mention of potential uncertainty ahead. We’ve been dealing with a lot of on-again, off-again uncertainty during the last few years, but here we go again it seems. With Syria behind us, as well as the answer surrounding Fed tapering, the next item on our plates will be the debt-ceiling conversation, which has already begun. At the heart of it, Republicans are pushing for spending cuts and a repeal of the 2010 health care law, while President Obama is insisting he will not negotiate over that law. If no deal is reached by the end of the fiscal year on Sept. 30, the federal government could shut down for business. As we’ve seen in recent years, Washington only seems to reach a deal — and a temporary one at that — when it faces a deadline.

The question you’re probably wondering is “will Washington get this done in time or will the government shut down?”

With respectable outlets ranging from the Financial Times to Yahoo! Finance running articles describing President Obama as a lame duck following his address on Syria last week, odds are Obama will continue to lean on The Affordable Care Act as a cornerstone to his presidency. I would be surprised if he caves completely on Obamacare. If he does, he has nearly ensured his lame-duck status. At the same time, a government shutdown would have negative impact on our tepid economy and re-ignite uncertainty.

Uncertainty ahead, plus a pullback in 10-year Treasury yields means… It will be an interesting chess match to watch as a citizen and an investor. Putting on the latter hat, the drop in the 10-year Treasury yield will make a number of sectors more palatable, particularly those that are interest-rate sensitive, such as housing. Yet given the prospects for a debt ceiling showdown and rising uncertainty as the two sides of the aisle duke it out, there is another group of stocks that subscribers to my investment newsletter PowerTrend Profits and my trading service PowerTrader know I call the “dividend dynamos.” This group of stocks pulled back as the 10-year Treasury yield climbed during the summer even though the underlying fundamentals remain strong for many of them.

As we stare down what is to come, it’s this group of stocks that I am combing through to find the right combination of a defensive business that consumers will not do without and shares that have a favorable dividend yield for my subscribers. But it’s more than just increasing the dividend year after year that sets these companies apart. Something Meritas Advisors’ Lenore Hawkins wrote recently reminded me of research from Cliff Asness and Robert Arnott that showed that the fiscal discipline required in companies with high dividend-payout ratios has generated stronger earnings growth over time. Rising dividends and strong earnings growth make for a powerful combination over time.

Dividend dynamos — a win-win. One other reason to circle back to these dividend dynamos now is that we are barreling toward the end of the year, which means before too long that they will be revisiting their dividend policy and communicating planned payout increases for the coming year. I see this forthcoming round of dividend increase as a win-win for my subscribers — either the shares move higher in step with the dividend increase or they hover and the dividend yield moves higher. Either way, my subscribers will be the ones that benefit. I hope you’ll join us.

Joining me to talk about the success, as well as the challenges, that Domino’s Pizza (DPZ) faces is Lynn Liddle, its executive vice president, communications, legislative affairs and investor relations. Lynn has been with the company since 2002 and has seen the good, the bad and the ugly along the way.

Like any business, the food industry has its ups and downs — from new products and better service to tighter consumer spending and cutthroat competition to rising input costs and potential regulations. Despite those and other challenges, people need to eat, which means balancing demand with consumer tastes that sometimes shift based on the diet trend du jour.

With $1.6-$1.7 billion in annual revenues and more than 9,700 company-owned and franchised locations, it’s a player in pizza and more. Lynn and I talk about all of that, as well as break down the company’s key cost items and discuss potential regulation that is winding its way through Washington, D.C., to potentially take a bite out of small businesses. You’ll even learn what the number one pizza toppings are in Japan and India. Here’s a hint, they aren’t what you think they might be.