Last week’s surprise Fed decision to hold off on any “tapering” of its $85-billion-per-month bond-buying scheme caused a lot of dislocation in the financial markets. First there was the big spike higher in stocks, bonds and gold prices immediately following the news. Then just a couple of days later there was some big selling in the equity markets as several Fed governors came out and said that the tapering could begin as soon as next month — depending on the data.

The result of the Fed’s decision last week, and the renewed taper talk that followed, has left the markets somewhat paralyzed about what to do next.

In fact, since the Fed’s decision a week ago, stocks have given back all of their post-decision gains. Bonds have rallied, and bond yields have seen a big plunge. We’ve also seen some modest economic data such as a decline in consumer confidence and a tepid durable goods report.

I suspect that unless we see some very strong economic data in the next month, something I definitely do not expect, we aren’t likely to see a major tapering effort until at least the end of the year.

I also think that situation could keep a lid on bond yields, at least in the short term. The chart below of the 10-Year Treasury Note yield ($TNX) clearly shows the move lower in yields, i.e. interest rates, since the Fed made its “no taper” announcement. 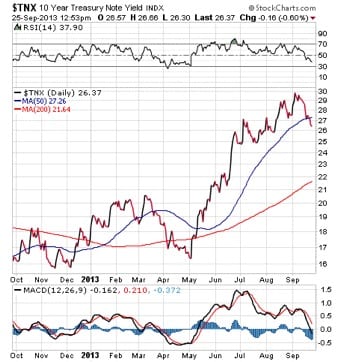 Meanwhile, stocks also have come back well off of their recent spike to new highs, as you can see in the chart below of the S&P 500 Index. The breakdown this morning below the psychologically significant 1,700 level is something to watch, as it could signal more downside in the days and weeks to come. 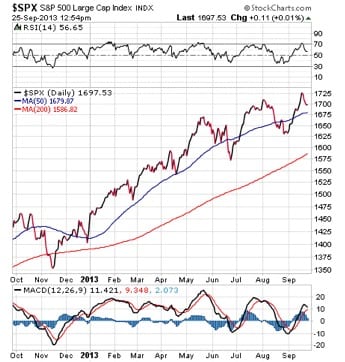 Now, if the Fed-engendered paralysis in the market — in terms of equity buyers stepping up and what is likely to happen next — wasn’t enough to make you nervous, then looking on the horizon at the pending debt-ceiling and government shutdown debate may get you really nervous.

The fight now is just getting heated about the funding of the federal government, ObamaCare and the lifting of the debt ceiling. I suspect the fight is going to get really ugly during the next several weeks. As such, we could be in for much more uncertainty, much more volatility and a whole lot of walls of worry that need to be climbed before the dust settles.

Life After Tapering — Listen to the Teleconference Replay Now!

There are big changes underway at the world’s most powerful central bank.

The Federal Reserve will almost certainly “taper,” and eventually end, its current $85-billion-per-month bond-buying program during the course of the next year or so. Despite the September decision to keep the monetary foot on the gas, the eventual end of quantitative easing, or QE, means big changes for your money?

What will life after tapering look like for investors seeking to grow their capital?

What will life after tapering look like for those whose primary concern is generating income from their existing assets?

Answers to these key questions, as well as many others, were the subject of our latest, and most timely, teleconference of the year, which was held live last week.

So, if you didn’t get a chance to listen live to this 60 minute presentation, fear not. We’ve made a full replay of the event available online, at Fabianwealth.com.

If you want to find out just how strong the winds of change are blowing at the Fed, and how those winds will reshape the investment landscape, then this teleconference is well worth a listen.

As we’ve seen, the biggest, and perhaps most dangerous, change is the trend toward higher, long-term interest rates. But how will rising rates affect your equity holdings? More importantly, how will the fixed-income arena be reshaped by the Fed’s altered policies?

Are Treasury bonds the new “toxic” assets? What about high-yield stocks? Is there any asset class that can help you capture income and growth in a rising interest rate environment?

The answers to these questions and many more can be found in this teleconference, aptly titled, “Life After Tapering: How to Position Your Portfolio in a New Fed World.”

Given the big changes just beginning to occur at the Fed, now is the time to get yourself prepared not only to survive, but to prevail in this “new normal” interest rate world.

Here are just a few of the topics covered in depth during the teleconference:

If you want to be prepared for the new reality of monetary policy, and what that means for your stock, bond and other fixed-income assets, then you simply MUST listen to the teleconference replay here.

NOTE: Fabian Wealth Strategies is a Securities and Exchange Commission-registered investment adviser, and is not affiliated with Eagle Publishing.

Presidential speeches are often filled with clichés and platitudes, but some 51 years ago this month, the world was treated to a great speech about why we should all strive to do things that are hard: because the goal is worthy. Current politicos could certainly learn a lot from the oration of five decades ago.