Whether the United States Should Adopt the European Model, According to Paul Krugman

Last week, at the invitation of Sheldon Jacobs (a longtime friend in finance and a regular attendee at FreedomFest), I went to see Paul Krugman speak at Westchester Community College, where he spoke before several hundred adults on “The European Welfare States Revisited.” Not very many students were there, but the adults there seemed to be fans of Krugman.

Krugman, pictured with me below, is America’s most famous economist, a Nobel Prize winner and New York Times columnist. 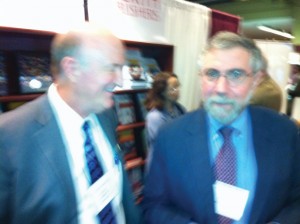 He made several controversial statements in his lecture:

I’m sure Steve Moore at Heritage Foundation has a different view on all these issues. He will be debating Krugman at next year’s FreedomFest. You won’t want to miss it.

Afterwards, I met up with Krugman. He assured me that he tries not to let his political biases affect his economic analysis. As the moderator of the big debate at next year’s FreedomFest, I plan to raise this issue, what academics call “confirmation bias.” He appeared excited about the debate with Steve Moore at FreedomFest. So are we. The differences between the two are huge. As Ben Franklin says, “By the collision of differences, light is obtained!”

You Blew It! Should the United States Adopt Chile’s Pension System?

“Chileans hate their private pension system, and it’s a bad idea for the U.S.” — Paul Krugman

Granted, not everyone in Chile is happy about their privatized pension system and would prefer a government-guaranteed retirement. But a recent study shows the nation’s private retirement accounts provide workers’ pensions that are worth 87 percent of their salaries, 73 percent of that from profits on savings. The story was front-page news in Chile’s largest newspapers, El Mercurio and La Tercera, on Sept. 3, a powerful affirmation of what former Republican presidential candidates Newt Gingrich and Herman Cain called “The Chilean Model” of private retirement accounts.

According to a report by Investor’s Business Daily, the study of 28,000 households by Dictuc, a consultancy affiliated with the Catholic University of Chile, showed that male workers who contributed just 10 percent of their salaries to their retirements for 40 years or more on average earned retirement checks worth about 87 percent of their top salaries. No 401(k) account was needed.

It redirected workers’ existing social security taxes to a new market-based system of investing choices that let workers make their own decisions in a program run by private companies.

The Dictuc study shows Chile’s private pensions over three decades have yielded returns six times higher than what workers got under Chile’s old social security system — which, by the way, was similar to ours.

The details of the Dictuc study shatter this pernicious myth: Data show workers earn an extraordinary 8.7 percent compound rate of return above inflation over a period of 32 years from the 10 percent of their salaries put away.

With Social Security’s trust fund slated to go bust in 2035, maybe it’s time to start thinking about how the lessons of Chile can benefit American workers, too.

In case you missed it, I encourage you to read my e-letter column from last week about what the latest Forbes 400 listing reveals about the American Dream. I also invite you to comment in the space provided below.

How Vanguard Takes on Developed Markets

VEA is Vanguard’s third-largest fund by assets under management at $44.46 billion, and its 0.09% expense ratio is less than a quarter of the average ratio for similarly allocated funds.