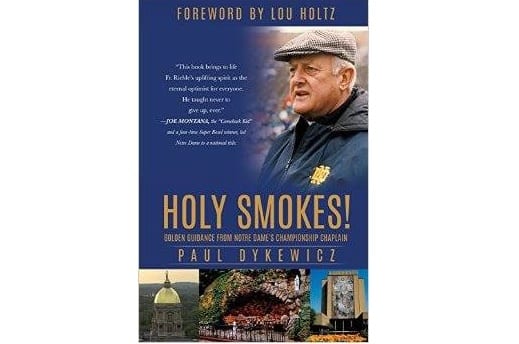 Everyone should aspire to live as exemplary a life as Fr. Theodore Hesburgh, 97, the former Notre Dame president, who died Feb. 26 but was a transformational national leader while also serving as the university’s president from 1952 to 1987, after receiving the school’s top job at the age of 35.

With Fr. Hesburgh’s help, the United States ushered in an era of civil rights and the Catholic school became one of the country’s top universities, despite him arriving when it was best known for its iconic football team. His prominence did not prevent Fr. Hesburgh from taking an interest in the many people who sought him out, including me when I contacted him several years ago for an interview that he granted for my new inspirational book, “Holy Smokes! Golden Guidance from Notre Dame’s Championship Chaplain.”

Fr. Hesburgh shared his recollections with me about Fr. James Riehle, Notre Dame’s late former sports chaplain, who was known for giving great advice for more than 40 years to help players and coaches overcome adversity to become successful on and off the athletic field. Fr. Riehle may have been one of the most conservative priests at Notre Dame during his tenure when many others viewed the world from the opposite side of the political spectrum. But Fr. Hesburgh still tapped the highly capable administrator and former salesman to serve in key posts such as the dean of students and the director of energy conservation (1973-93).

To Fr. Hesburgh, the capabilities of a person and giving everyone an equal opportunity to serve and to fulfill his or her potential seemed to matter most, not political ideology. That focus on trying to find the best person for each job also manifested itself with his dedication to civil rights advances to help minorities gain the same opportunities for education and career aspirations as anyone else.

The choice of Fr. Riehle to head discipline at Notre Dame during the Vietnam War era by Fr. Hesburgh proved prescient. The two good friends established a “15-minute rule” that warned protestors who were preventing other students from attending class or entering buildings to cease and desist or face suspension or expulsion. As I wrote in my book, those who tested the resolve of Fr. Riehle and Fr. Hesburgh to apply that rule learned that it would be enforced when needed.

While eulogizing Fr. Riehle at the priest’s funeral Mass on November 3, 2008, Fr. Hesburgh recalled an instance when student protestors planned to burn down the ROTC building on campus. Each protestor arrived at 5 a.m. with a bucket of fire in one hand and a bucket of gasoline in the other hand. Fr. Riehle, who served in the U.S. Army before becoming a priest, knew the tactics of war and learned in advance of the plans to torch the building.

Fr. Riehle arranged for each protestor to be double-teamed by two other students who each took a bucket and dumped its contents into a nearby lake. Once the flammable materials were thrown into the water, each of the protestors also was flung into the lake’s cold waters by two other students to ensure the protest ended and to deter any future plans to set campus buildings on fire.

The actions “saved the day” and the building, Fr. Hesburgh recalled. Notre Dame was one of the few universities in the country where students who tried to do something “outrageous” were stopped, Fr. Hesburgh added.

Another time Fr. Riehle expelled and suspended students who insisted on blocking the entrance to a building but they immediately went to Fr. Hesburgh’s office to complain and request that the university president rescind the punishment. Fr. Hesburgh instead backed Fr. Riehle’s decision, told the students they had blown their opportunity upon receiving a warning to stop protesting disruptively and needed to be off campus by noon that day.

However, all of those students were allowed to resume their studies the next semester.

Vietnam War protests on campuses across the country caused the presidents of 250 universities, including those at all of the Ivy League schools, to lose their jobs, Fr. Hesburgh said.

Fr. Hesburgh also led the 1972 admission of women to Notre Dame’s undergraduate program.
He held 16 presidential appointments on issues such as civil rights, peaceful uses of atomic energy, campus unrest, treatment of Vietnam draft evaders, Third World development and immigration reform. A charter member of the U.S. Commission on Civil Rights in 1957, Fr. Hesburgh served as its chair from 1969 to 1972.

Fr. David Link, a prison chaplain and co-author of the book, “Camerado: I Give You My Hand,” shared a story with me about Fr. Hesburgh’s impact on society after he and I participated in a book signing at the Hammes Notre Dame Bookstore last fall. Fr. Link recalled buying a sweatshirt for Fr. Hesburgh at a store when the woman at the checkout register asked if the purchase was a gift.

When informed Fr. Hesburgh would receive the item, the African-American woman told Fr. Link to “thank him for giving us civil rights.”

For service to his country, Fr. Hesburgh received the Medal of Freedom, the nation’s highest civilian honor, from President Lyndon Johnson in 1964.

Fr. Hesburgh’s autobiography, “God, Country, Notre Dame,” was published in November 1990 and became a national best seller. The 150 honorary degrees he received from various universities are believed to be the most ever awarded to one person.

If honorary degrees reflect a person’s importance in the eyes of others, Fr. Hesburgh’s record of accomplishment may be unmatched.

previous article
Investing in High-Yield Alternative Asset Classes in a Fed-Strapped Market
next article
My $25,000 Bet against Warren Buffett Revisited
share on: