“If investors weren’t so often wrong, we wouldn’t be rich.”

As long-term subscribers know, I love to attend conferences and feel the pulse of investors. I think it makes me a better investment analyst. Over the years, I’ve attended them all — MoneyShows, the New Orleans Investment Conference, Milken Institute’s Global Conference, Investment U and, of course, my own FreedomFest (only two months away!).

Last Saturday, I was at the granddaddy of them all: the 50th anniversary shareholders’ meeting of Berkshire Hathaway, known as the “Woodstock of Capitalism.” A record crowd of more than 30,000 showed up, and my son and I barely got a seat. Then we spent several hours taking in the wit and wisdom of Warren Buffett and his partner Charlie Munger.

Meeting veterans on Wall Street (I’ve had the privilege of meeting many of them) always reminds me of the ancient Chinese question, “What is your glorious age?” Buffett is 85 and Munger is 91, but neither has lost his ability to speak plainly and in detail about the most successful conglomerate in history, Berkshire Hathaway (NYSE: BRK-A, BRK-B). 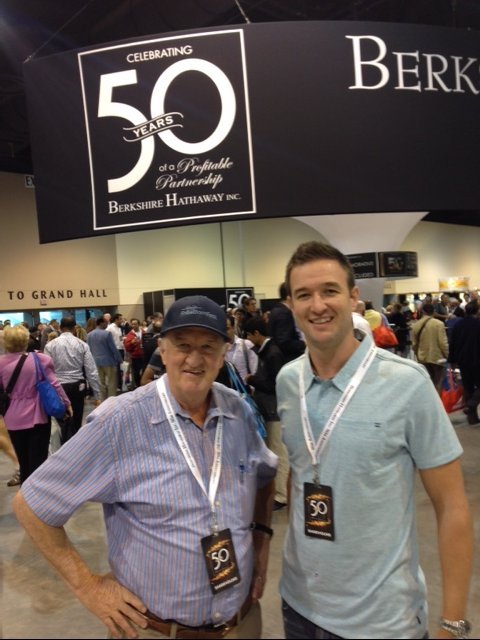 My son Todd joins me at the Berkshire Hathaway meeting in Omaha.

Reading their annual letter to shareholders and attending the famous six-hour question and answer session at the annual meeting is like taking a course in Finance 101.

The key to Berkshire’s long-term success in beating the market is simple and expressed in Charlie Munger’s formula: “Rather than buy fair companies at a wonderful price, buy wonderful companies at a fair price.” (This and other famous quotes from Munger and Buffett can be found in my unique book, “The Maxims of Wall Street” — click here to buy).

The twin gurus don’t believe in timing the market or buying turnarounds that require new management.

Buffett believes bonds are “very overvalued” and stocks are on the “high side of valuation” but certainly a better deal than bonds. They shy away from predicting the future of the markets.

“We are swimming all the time, but we let the tide take care of itself,” Munger said.

Buffett seems to have mixed feelings about whether you can beat the market or not. On the one hand, he was critical of the efficient market theory that you can’t beat the market.

“If investors weren’t so often wrong, we wouldn’t be rich,” confessed Munger.

On the other hand, Buffett attacked active money managers (hedge funds) for failing to beat the market during the past five years and suggested that investors would do better in a stock index fund.

Buffett’s fund is famous for having beaten the market substantially over a 50-year period. But in his latest annual report, “The Next 50 Years at Berkshire,” he confessed, “The bad news is that Berkshire’s long-term gains cannot be dramatic and will not come close to those achieved in the past 50 years. The numbers have become too big.”

I think that’s already happened. In the past five years, BRK has slightly underperformed the S&P and the Nasdaq when you add in dividends.

Right now, Berkshire is sitting on $60 billion in cash, looking for new buying opportunities. That’s a substantial drag on returns.

Meanwhile, our formula for success at Forecasts & Strategies is to buy high and rising dividend stocks, a good combination of income and growth. And it works like a charm. See www.markskousen.com for details.

Buffett on the Minimum Wage

As usual, shareholders asked a bunch of questions about politics. Did Buffett favor an increase in the minimum wage?

“Yes,” Buffett said, but with an important caveat. “If you raise it too much, it will create massive unemployment.” He said he had read Adam Smith’s “Wealth of Nations” (one of his favorite books) and understood supply and demand. Instead of the minimum wage, he supports an earned income tax credit as a better solution to encouraging higher wages in the workplace.

Now for a Real ‘Fight of the Century’

Warren Buffett began his annual shareholders show with a funny video of him fighting an exhibition with boxing champion Floyd “Money” Mayweather (Berkshire’s meeting was held last Saturday, the day of the big fight between Mayweather and Manny Pacquiao). It turned out that the Buffett video was a lot more entertaining than the actual “fight of the century,” which was a bust. My son and I watched it at a local bar in Omaha — what a bore! Neither fighter drew blood during the entire 12 rounds.

If you want to see a real heavy-weight fight of the century in Las Vegas, come to FreedomFest July 9 and see Steve “Supply Side” Moore take on Paul “Crude Money” Krugman at the Celebrity Ballroom at Planet Hollywood. It is only two months away. NOW is the time to buy your tickets before it gets hectic. We’re getting strong interest from the media for this event, including the New York Times, Daily Mail (“the world’s largest news website”) and even Playboy magazine!

Last week at the National Review Idea Conference, attendees were flabbergasted that we got Paul Krugman to debate Steve Moore (he’s been avoiding this debate for years, not unlike Floyd Mayweather, who avoided fighting Manny Pacquiao for years). Who will win this “fight of the century?” Come and see as they debate the future of the economy and the markets. Steve Moore and I will have a debriefing breakfast meeting the next morning after the debate, where we will address how the economy will affect your investment strategy.

We also just confirmed that John Stossel is returning to tape his Fox News show at FreedomFest, and he will interview billionaire Steve Wynn, the man responsible for the “new” Las Vegas. You won’t want to miss this explosive interview with him, as well as John Mackey, co-CEO of Whole Foods Market (he and Steve Forbes are co-ambassadors of FreedomFest and will be there all four days).

Also attending all four days will be Alex Green (Oxford Club), Keith Fitz-Gerald (Money Map), Adrian Day, The Aden Sisters and a host of other financial gurus who will conduct a three-day investment conference at FreedomFest.

You Blew It! More than Anything, Baltimore Needs Jobs

“The largest cities in the U.S. are showcases for socialism.”

Yes, racism is a problem with the police departments of most major cities, but a greater source of unrest in Baltimore is the large number of people without jobs and on welfare. Labor regulations, high minimum wage laws and excessively high taxes in Maryland have caused a drain on business in the state.

I see that Maryland’s former Gov. Martin O’Malley, a likely candidate to oppose Hillary Clinton to become the presidential nominee of the Democrats, was given a “D” grade by Cato’s 2014 report card of states.

There aren’t any riots in Florida, Georgia or Texas because those economies are flourishing and creating millions of new jobs.

Baltimore has a lot of wealthy people making money in finance — Bill Bonner’s Agora Finance is located there and doing well. Mutual fund company T. Rowe Price also is based there. But Baltimore lacks jobs for the middle and lower classes, including manufacturing jobs, which are being exported to other states and countries with less regulation and taxes than Maryland.

As Roger McKinney, editor of “The Affluent Investor,” states, “To paraphrase Ludwig von Mises, socialism is paradise until the money runs out, then it’s hell. The socialist elite have transformed once-great U.S. cities into third-world disasters where a small, extremely rich elite rules over poverty-stricken masses and an emaciated middle class.”

In case you missed it, I encourage you to read my e-letter column from last week on Eagle Daily Investor about how a weak economy impacts the market. I also invite you to comment in the space provided below my commentary.

O Las Vegas MoneyShow, May 12-14, Caesars Palace: I will be the keynote speaker at this year’s Vegas MoneyShow! I will be speaking on “Is the Golden Age of Investing Over? Not for this Market-Beating Strategy!” Other speakers include Andy Busch, Marilyn Cohen, Roger Conrad, Bob Carlson, David T. Phillips, Jeff Hirsch, Mark Hulbert, Louis Navellier, Jim Stack and Wayne Allyn Root, as well as my Eagle Financial Publications colleagues Doug Fabian, Chris Versace and Bryan Perry.

Be a guest of Eagle Financial Publications and register for FREE by using priority code 038654 and calling 800-970-4355 (toll free in the United States and Canada) or signing up online.

O I want to invite you on a cruise, Sept. 13-20, with Newt Gingrich, Chris Versace and me, among others. I will be doing a special one-on-one interview with Newt Gingrich on the cruise. Come spend seven fabulous days aboard the six-star luxury liner, the Crystal Symphony. We will travel from New York to Montreal with a roster of noted historical scholars, political pundits and renowned market experts who will share their insights and perspectives on the current environment in Washington and Wall Street. For further information, including how to sign up, call 800-435-4534 or visit www.PoliticsAndYourPortfolio.com. Not to be missed! The deadline to sign up is May 22!