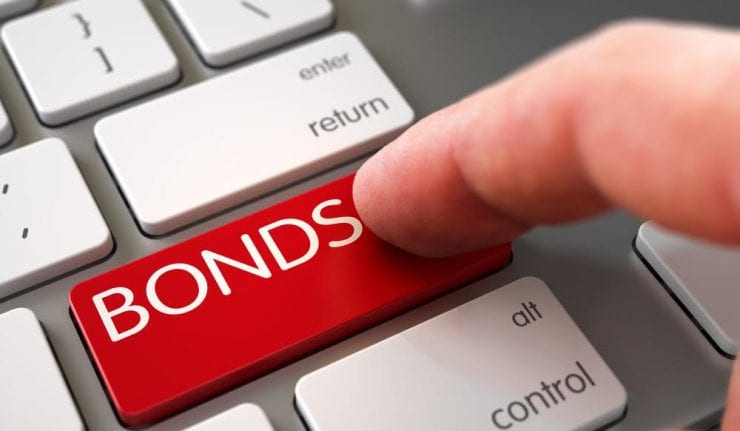 Of the many news feeds and funnels of research that I pan through every day, once in a while an article or note will send off a warning flare that gets my attention.

Late last week, FINSUM (Financial News Summarized) reported that Larry Summers, of Harvard University, had been warning lately about market dangers. However, now a new warning shot has come out of the university. A PhD candidate there, who is also a visiting researcher at the Bank of England, said that the bond market is set for a crisis worse than that which struck in 1994.

This student is doing his PhD on bond crises, and based on his models, the market looks set for a worse reversal than in ’94, when 10-year Treasury yields rose from 5.6% in January to 8% in November while the Fed doubled benchmark rates. Summarizing the researcher’s views, the report indicated, “The current bond market is facing the ‘perfect storm’ of potential steepening of the bond yield curve, monetary policy tightening and a multi-year period of sustained losses due to a ‘structural’ return of inflation resembling that of 1967.”

FINSUM’s commentary on the piece follows.

“The bond market does seem like it is still quite overstretched and it may prove the ultimate victim in the big shift in economic expectations that we are currently undergoing,” FINSUM noted. The obvious question that comes to mind is what was the inflation rate in 1967 and why is it significant?

If we add food and energy back in, since they are a big part of every consumer’s life, the numbers are considerably higher, with the inflation rate in 1967 at 3.46%.

What is more telling from the table below is that the inflation trend leading up to 1967 looks eerily like the past two years leading up to 2016, with inflation under 1.0% in 1965 and then moving up to about 2.0% in 1966. Inflation was running under 1.0% in 2015 and ended 2016 at just under 2.0%. Assuming the historical model has any correlation with the present and inflation ticks up to 3.5% in 2017, bond yields will move decidedly higher and cause severe carnage in fixed income asset classes. 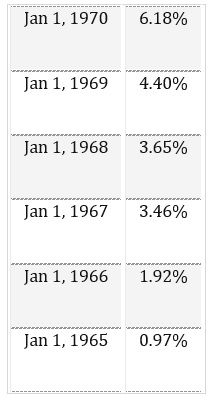 The first read on inflation for 2017 is the release of the Consumer Price Index (CPI) on Jan. 18. It will be one of the most anticipated and closely scrubbed data points, as it will generate huge buzz as to whether the Fed will be on the move to hike the Fed Funds Rate another quarter point at the March Federal Open Market Committee (FOMC) meeting. If the Fed Fund futures market starts to bet in favor of such a possibility, it is my view the yield on the 10-year Treasury Note will trade quickly up to 3.0% and spark another round of sharp selling in all classes of bonds that have maturities beyond seven years.

Under this scenario, investors that haven’t repositioned bond portfolios and shortened up maturities would be wise to consider taking action while bond yields have backed down in the past two weeks. The yield on the 10-year T-Note touched 2.62% on Dec. 15 and is now trading with a 2.42% handle. The pullback in yield has provided a nice oversold bounce in utilities, telecom, real estate investment trusts (REITs), bond mutual funds and closed-end bond funds — the kind of bounce that I would regard as a post-Christmas gift card that should be cashed in the midst of this current relief rally.

Clearly, the economic data is improving, with the Atlanta Fed raising its fourth quarter 2016 gross domestic product (GDP) estimate to 2.9% from 2.5%. And this comes well before any of President-elect Trump’s economic stimulus plans are even put to a committee on Capitol Hill. When tax cuts for individuals and corporations are put in place, along with varying degrees of deregulation, infrastructure spending and repatriation of capital will both be factored in. Thus, it is not out of the realm of possibility to see GDP growth above 4.0%. If so, I fully would expect the Fed to take the Fed Funds rate up from its current 0.50% level to 1.25-1.50% by the year’s end.

I remember well the bond market correction in 1994 that is noted above, when the 10-year T-Note yield rose by 2.4%. It was not pretty. High-quality bonds with 10-year maturities lost about 15% in value, 20-year bonds lost more than 23% in value and bonds with maturities of 30 years or more were hammered by almost 28%. Junk bonds saw losses exceed these figures by another 10%-20%, depending on the underlying issuer.

The good news is that if one takes proactive measures to shorten up maturities to the 5-7 year time frame, the potential losses of 4-9% over the short term are quite manageable. One reason is that a bond which matures in 5-7 years doesn’t feel that far out in the future, and it is why bond traders consider this the sweet spot on the yield curve when there is risk that future interest rates will rise.

Make it a New Year’s resolution to give your bond portfolio some serious attention and not get caught in one of those “if I had only known, I would have…” scenarios. It definitely is worth your time because no one wants to be caught in a game of musical chairs when it involves what is supposed to be the safest asset class in one’s portfolio.

In case you missed it, I encourage you to read my e-letter from last week about what income investors can expect in the new year.

The U.S. stock market opened the first trading week of 2017 with substantial gains. The Dow Jones rose 1.01%, the S&P 500 jumped 1.65% and the NASDAQ rebounded 2.91%. The MSCI Emerging Markets Index continued its strong run by rallying 2.66%. This week’s Bull Market Alert recommendation takes you back into the tech sector with a fast-growing Silicon Valley-based small-cap stock. Founded in 1966 and headquartered in Santa Clara, California, Coherent Inc. (COHR) p