Giving Thanks for Strong Global Markets with This Vanguard ETF 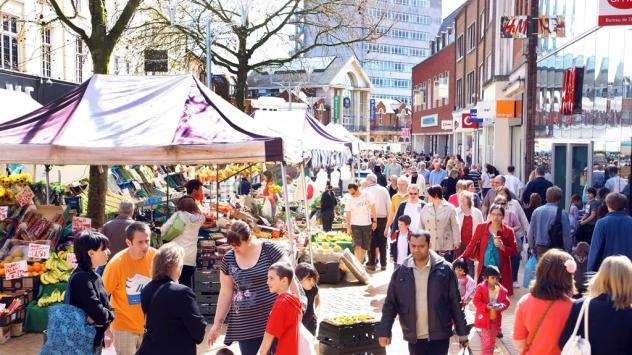 With a year-to-date return around 23%, the Vanguard FTSE Developed Markets ETF (VEA), and other exchange-traded funds (ETFs) like it, are giving international investors plenty of reasons to be thankful this holiday season.

2016 was undoubtedly a rough year for international markets. The unexpected outcome of Brexit, fear of more events like that one and the surprising rise of populist and nationalist movements in several countries caused members of the European Union (E.U.) to stumble. However, in 2017, the winds began blowing in favor of international markets more so than domestic markets for the first time in many years. Talk of Brexit-like events died down and pro-growth leaders such as Japan’s Shinzo Abe remained in power.

As a result, while the U.S. economy has been steadily bullish this year on the back of Trump’s pro-growth policy, international markets have actually matched or outperformed the United States year to date, as the chart below illustrates: 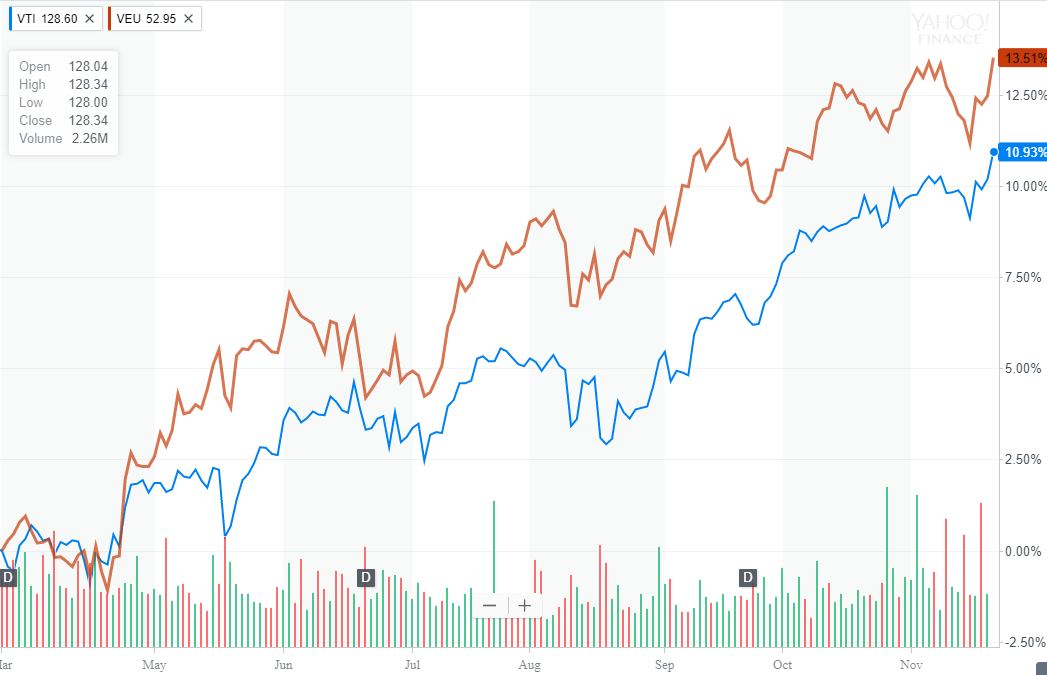 How does international outperformance benefit VEA? As a developed markets fund with over $100 billion in net assets and 3,800 holdings, VEA provides excellent coverage of large-, mid- and small-cap stocks located outside the United States, including Canada. Daily average trading volume is around $320 million, so the fund sees plenty of activity.

In terms of international allocations, according to ETF.com, the top countries are Japan, 21%; the United Kingdom, 15%; Canada, 8%; and Germany, 8%.  Sector allocation is dominated by financials, 24.93%; industrials, 15%; and consumer cyclicals, 12.45%, although VEA maintains allocations in a diverse array of market sectors.

Year to date, VEA has outperformed the S&P 500 by more than 5%, yet further proof of how international markets have outperformed this year. The fund has a respectable 2.5% yield and follows the trend of Vanguard funds, offering a very low expense ratio with a rate of just 0.07%. At that level, the fund’s fee is among the lowest in the segment. 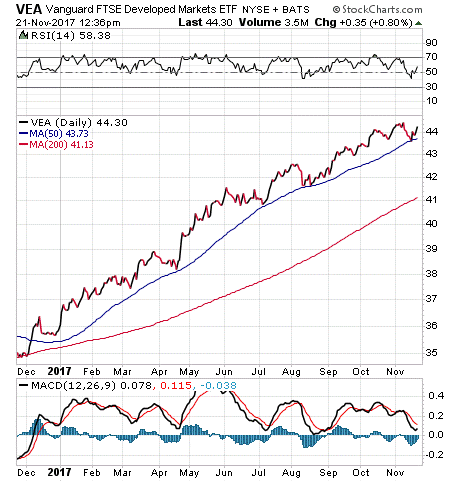 For investors who are looking to play the unexpected outperformance of international markets in a diverse and broad manner, the Vanguard FTSE Developed Markets ETF (VEA) may be a good choice.

I. Conservative Recommendation Markel Corporation (MKL) Trading at less than 4% of Berkshire Hathaway's (BRK-B) market cap, Markel Corporation, a holding in Smart Money Masters, is referred to as a "mini-Berkshire" for its similarity to Warren Buffett’s investment vehicle.