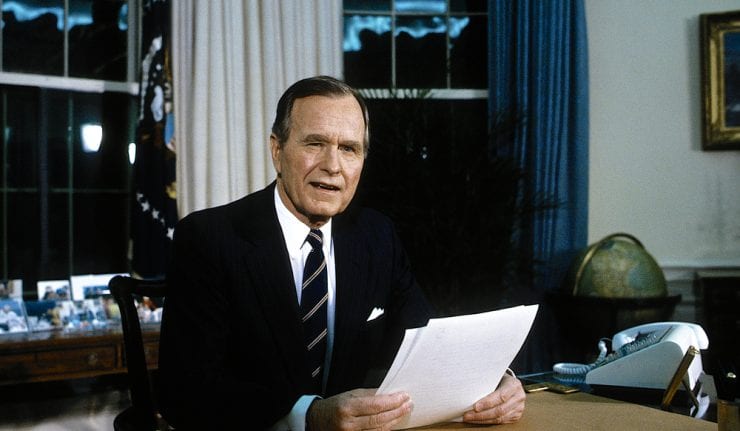 As I write this week’s issue, there’s literally a funeral taking place at the Washington National Cathedral. The event is, of course, to remember and celebrate the life of President George Herbert Walker Bush. Bush, or “41” as he came to be known, died Friday at the age of 94.

Since the news of Mr. Bush’s passing was announced, there has been a flood of commentary from both political friend and foe about the former commander in chief, a man who was clearly dedicated to serving the United States and her citizens the best way he knew how. That commentary has been overwhelmingly complimentary of the man, not only for his achievements in life, but also for the grace, class and kindness by which he lived.

I’ve read and heard multiple remembrances of “41” from those who worked with him in government, and from those who battled him in both the Republican and Democratic political parties. It is interesting that nearly every comment about Mr. Bush has been that he was a man dedicated to country, as well as a man of humility, sincerity, integrity, compassion and just plain old-fashioned decency. That’s not something that can be said for very many professional politicians.

Perhaps most impressive to me about the life of “41” is the tremendous scope of his achievements. At age 18, Mr. Bush joined the U.S. Navy during World War II. Soon after, he became the youngest American naval aviator. By age 20, he had already flown some 58 combat missions.

Exclusive  From Best to Worst: ‘Manager of the Century’ Falls Into Disgrace!

In my early 20s, I was living a care-free life by comparison, studying Aristotle, Plato and Kant inside the sheltered ivory towers at UCLA by day, and working out in preparation for bodybuilding competitions in the evenings. That’s not a very important life by comparison.

After the war, Mr. Bush got his education at Yale University, married future First Lady Barbara and moved to Texas to make his own fortune in the oil business. Later, the future president went into politics, and after an unsuccessful run for a Senate seat, he was elected to the U.S. House of Representatives in 1966 and served two terms.

Mr. Bush then ran again for the U.S. Senate, but again he was defeated. Yet not giving up on the notion of a political career, Mr. Bush later was appointed ambassador to the United Nations by President Nixon. A series of other top appointments came next, including chairman of the Republican National Committee, envoy to China and director of the CIA.

Leading up to the 1980 presidential election, Mr. Bush ran for the nomination of the Republican Party, but of course, we know the victor there was Ronald Reagan. Yet when Reagan needed a running mate, well, there was Mr. Bush, the perfect sidekick with the stellar resume.

Eight years later, the sidekick became the star, as George H.W. Bush became the 41st President of the United States.

In office, “41” made some good decisions and some bad decisions. The degree of goodness and badness of those decisions depends largely on your political philosophy. I know how I feel about many of those decisions, but today isn’t the day for such critical reflections. Besides, history will adjudicate the Bush presidency far better than any one writer is capable of doing.

I will, however, leave you with a reflection of my own regarding “41.” It was January 1991, and President Bush was my commanding officer. I was just a low-ranking Army Specialist at the time, and I was about to graduate from the Army’s prestigious Airborne School.

I still remember our company commander telling us that after we made our final jumps, we would have to wait to find out where we would be sent next, as all future assignments had been suspended due to the commencement of Operation Desert Storm.

For a kid in his 20s who just a year or so before was reading philosophy, working out all day and hanging out in Venice Beach, the prospect of being sent to the Persian Gulf to fight Saddam Hussein’s army was both terrifying and exhilarating. Yet due to the immense operational success of Operation Desert Storm, allied coalition forces had conquered the enemy in lightning-fast fashion. After just 42 days, President Bush declared a cease-fire on February 28, 1991.

It was a combination of proper planning, a defined and focused objective, and the exercising of restraint in not pushing further to engage in regime change that kept so many Americans from having to experience the horrors of war in 1991. And though circumstances in that troubled region would change markedly in the decade ahead, his decision to avoid more bloodshed at that juncture in history was one that had a life-changing influence on so many — including yours truly.

Finally, I am not one who naturally venerates politicians. It’s just not my nature. I am, however, someone who venerates achievement, integrity, reason and goodness — all of which are qualities embodied in “41.”

So, Mr. President, thank you for the life you lived, and the example you set for Americans. I wish you Godspeed.

A Presidential Quote of Optimism

“I do not mistrust the future; I do not fear what is ahead. For our problems are large, but our heart is larger.”

This week, it’s only fitting that this week’s quote of supreme optimism comes to us from “41.” Who better deserves the spotlight on this national day of mourning? Thank you, Mr. President, all our hearts are larger for your existence.

share on:
Exclusive  Update on Recession Fears: Surprise on the Upside!