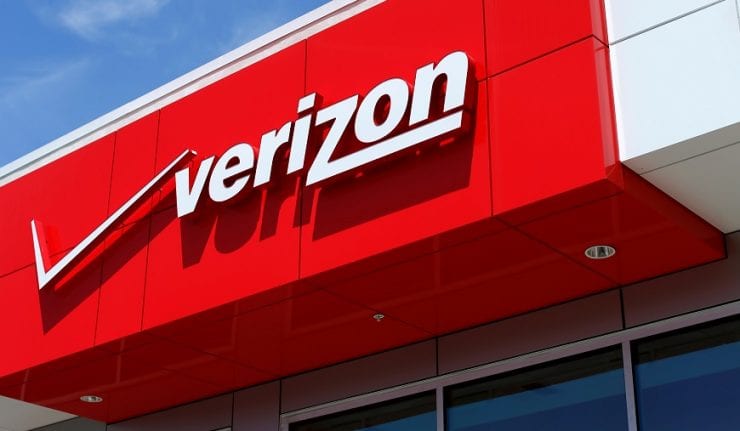 The fourth-quarter and full-year 2018 earnings report released Jan. 29 resulted in a drop of 3.25 percent, or $1.79 a share, closing at $43.28, for the Verizon stock price due to the company missing analysts’ revenue estimates. Verizon’s stock price already had ascended in the weeks and months that followed the naming of Hans Vestberg as its new CEO in April 2017, after he took steps to cut $10 billion in costs by 2021.

Verizon Communications Inc. (NYSE:VZ) is seeking further share-price gains from cost-cutting and reorganization measures that caused it to take $4.9 billion in one-time, pre-tax losses dominated by a $4.6 write-down of assets in its struggling Verizon Media Group business. That weak-performing business, which includes the acquisitions of AOL and Yahoo, suffered a 5.8 percent drop in fourth-quarter 2018 revenue of $2.1 billion, compared to the same quarter of 2017. The media group is expected to cut 800 jobs to help improve its bottom line, according to the Wall Street Journal.

Verizon achieved $2.3 billion in cost savings by year-end 2018, with the majority coming from capital efficiencies. That fulfilled 23 percent of the company’s planned $10 billion in cost-cutting by 2021 that will include the elimination of about 10,400 jobs.

The company still managed to amass net income of $2.1 billion in Q4 2018, as well as produce earnings before interest, taxes, depreciation and amortization (EBITDA) of approximately $6.9 billion. But its consolidated EBITDA margin in Q4 2018 slipped to 20.2 percent, compared with 25.4 percent in 2017’s fourth quarter.

Hefty one-time write-downs in Q4 2018 made it difficult to compare year-over-year performance. Verizon officials seemed to take every possible markdown to clean the balance sheet of underperforming assets to give its new CEO a chance to account for businesses that were faltering before his arrival.

The race to introduce 5G services is important because they will offer much faster data download and upload speeds, wider coverage and heighted stability in connections. The 5G technology will make better use of the existing and limited radio spectrum to allow more devices to access the mobile internet simultaneously.

Verizon notched several 5G firsts in 2018. It became the first provider in the world to commercially offer 5G to consumers. As the company begins 2019, it intends to be part of “transformational change,” Vestberg said in a statement. He added that Verizon is laser-focused on giving its customers a “best-in-class and game-changing experience” on its networks.

Verizon expects to devote $17-18 billion to capital expenditures in 2019 that will include expanded commercial launch of 5G. Its management offered guidance that the company would: produce low single-digit-percentage growth on a GAAP basis; produce earnings per share similar to 2018; and face an expected tax rate of 24-26 percent that will require $2-3 billion in additional tax payments this year than in 2018.

The company’s wireline business incurred erosion with its revenues falling 3.2 percent in Q4 2018, compared to the same quarter the year before. That business unit’s revenues slid 3 percent for full-year 2018 year over year.

Verizon’s wireline operating loss reached $273 million in fourth-quarter and full-year 2018, the company reported. In addition, its business segment operating loss margin rose to 3.7 percent in Q4 2018, compared to 0.9 percent for the full year.

Income-seeking investors should be heartened to know that Verizon paid $9.8 billion in cash dividend payments to its shareholders in 2018. Another sign of the company’s financial strength is that it trimmed its unsecured debt by $5.2 billion and its total net debt by $4.7 billion last year.

Bob Carlson, who heads the Retirement Watch advisory service, said Verizon’s dividend is one of the key reasons its stock price has held up much better than the indexes since the market’s peak.

“The company pays a high, safe dividend that it has increased steadily over the years,” Carlson said. “Plus, it turned out to be the strongest member of the telecommunications sector. It hasn’t strayed much from its core business and has invested a lot of capital to update its network and maintain its reliability. The company is unspectacular, but there’s been a lot to like about its performance.”

Bryan Perry, who leads the income-focused Cash Machine investment advisory service, described Verizon, with its dividend yield of 4.27 percent, as one of the stocks that could help investors “survive” a market crash. Investors are able to buy Verizon a bit less expensively now after its 3.17 percent share-price drop on Jan. 29 when it reported its fourth-quarter and 2018 results that showed weaker-than-expected growth.

The stock reached an all-time high in December 2018 partly due to the upside it could gain from its 5G rollout, Perry said.

While banks offer interest between 1-2% and short-term treasuries pay about 2.5-2.7%, those “skinny yields” pale in comparison to Verizon’s current dividend yield of more than 4.2 percent, Perry opined. Plus, the tax rate is capped at 20 percent for qualified dividends, in contrast to a maximum rate of 39.6 percent on interest earned from bonds, he added. 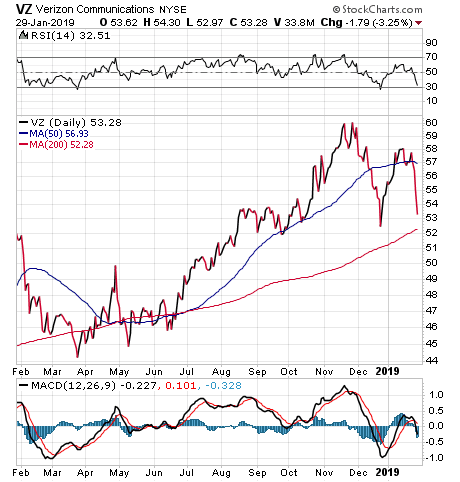 Verizon Stock Price is up 22.5 Percent Since Nov. 1

Dr. Mark Skousen’s Forecasts & Strategies advisory service has been recommending Verizon profitably as one of his “Flying Five” stocks since Nov. 1. Those stocks consist of the five highest-yielding, lowest-price equities among the 30 biggest companies in the Dow Jones Industrials.

Since Skousen recommended Verizon, the stock is up 22.55% through the close of trading on Jan. 29.

“Telecom investing boils down to a lot of flat highway punctuated with the occasional lift from new products or transformational acquisitions,” Kramer said. “If Verizon hands us more than 9 percent earnings growth total over the next five years, it will be ahead of the curve.”

The company’s previous purchases of AOL and Yahoo have not fared as well as expected but 5G could be a happier story, since Verizon is “leading the way” among U.S. telecommunications providers, Kramer said. When 5G happens in earnest, Verizon probably will be the stock to own among the providers, she added.

When comparing Verizon to its chief telecommunications rival AT&T Inc. (NYSE:T), the latter company’s current dividend yield of 6.65 percent stands out. But even though the superior income payout from AT&T is attractive, the odds are good that the slight edge on that front won’t last long with Verizon’s long-term growth and 5G potential fueling its future.

previous article
Is Lowe’s 7.7% One-Year Share Price Decline a Buying Opportunity?
next article
Why the Rich Get Richer — and How You Can Too