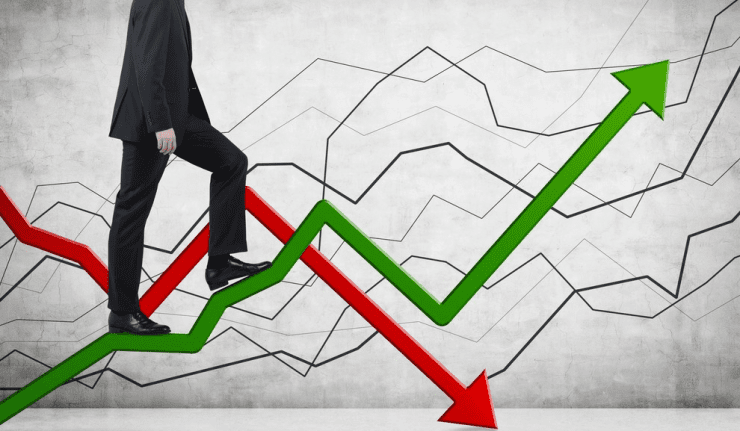 Many investors are struggling to figure out what direction will the stock market take in the aftermath of the steep selloff on February 24, 2020, which became the third-largest point drop in the Dow Index’s history.

While the market decline yesterday ranks among the highest point losses ever, the pullback was actually not very steep in relationship to the total market. Because the Dow 30 Index has advanced significantly to record levels and had been approaching the 30,000 mark before yesterday, the recent one-day stock market drop of 3.56% is not at an alarming level.

While yesterday’s drop might not have been enough to set any records, any substantial pullback can have considerable long-term effects on individual investment portfolios. Even investors that work with very long investment horizons should certainly pay attention to the stock market movement. A wrong move in the aftermath of the current stock market pullback that results in a loss of just few percentage points might not seem like much. However, missing the compounding effect of just a point or two can reduce a portfolio value by thousands or  tens of thousands of dollars over an extended period.

Therefore, investors should try to identify the potential triggers of the current pullback and try to weather any potential short-term downturns. Multiple countries have been dealing with the coronavirus, or COVID-19, for several months. Yet, stock markets – especially in the United States – appeared immune to any negative effects of the epidemic. The most likely reason for the stock market’s resilience was the perception that, while a serious issue at the origin in China, the virus had not spread in any significant volume to the rest of the world.

However, a recent announcement of substantial increases of confirmed infections in Italy and Iran have raised concerns of a potential wider global outbreak. Furthermore, increased frequency of the term “global pandemic” in official reports and news articles has exacerbated fears and uncertainty over stock market direction in the near and medium terms.

Barring a true global pandemic, the overall economy should be able to rebound over the long-term on strong fundamentals, at least in the United States. Despite the current pullback, the U.S. stock market is currently considerably stronger than many markets around the world. Therefore, with very limited investment options in their local markets, a sizable share of global investment funds is fleeing to the relative safety of the U.S. markets.

After pulling back more than 1,000 points yesterday, the Dow 30 Index began trading today with a gain of more than 100 points. This initial gain should not have come as a surprise to anyone. After the large drop yesterday, bargain-seeking investors were looking for good deals in early trading, which pushed the markets higher.

However, after the initial uptick, the stock market reversed direction and resumed the downward trend from yesterday. As of this writing at 2 p.m. on February 25, the Dow 30 was trading nearly 800 points lower than its level from the beginning of trading this morning. Also, all Dow 30 components have extended their downtrends from yesterday and continued to decline today. After delivering the largest drop among Dow 30 components, 7.8%, yesterday, UnitedHealth Group Inc. (NYSE:UNH) already has pulled back another 4.6% today. With only the second-highest pullback yesterday of 5%, the American Express Company (NYSE:AXP) leads the decline with a drop of more than 6% so far today.

Exclusive  Get Yourself A Chow Chow

The best Dow 30 performers are currently the McDonald’s Corporation (NYSE:MCD) and Verizon Communications Inc. (NYSE:VZ). These two companies are down approximately 2% each over the last two days combined. While still down, these two stocks have not given their shareholders any reason for major concern yet.

All but a handful of S&P 500 stocks were down yesterday. Not surprisingly, three out of the four S&P 500 Stocks with largest declines yesterday were cruise line stocks. The Carnival Corporation (NYSE:CCL) was down 9.4%, Norwegian Cruise Line Holdings Ltd. (NYSE:NCLH) was down 9.3% and Royal Caribbean Cruises Ltd. (NYSE:RCL) declined 9%. The only non-cruise-line stock in the top four was the Centene Corporation (NYSE:CNC) with a 9.3% decline. The Centene Corporation provides services for government-sponsored healthcare programs, such as Medicaid.

Through 2 p.m. on February 25, these four stocks have added between 5% and 7% to their losses of 9% or more from yesterday. Some of the biggest losers on the NASDAQ exchange were American Airlines Group Inc. (NASDAQ:AAL) with an 8.5% decline, Advanced Micro Devices Inc. (NASDAQ:AMD) with a 7.8% drop and Tesla, Inc. (NASDAQ:TSLA), which pulled back 7.5%. However, among the overall carnage, a few stocks are trending higher.

After the end of trading on Monday night, Moderna, Inc. (NASDAQ:MRNA) announced a shipment of its experimental COVID-19 vaccine to the National Institutes of Health for human trials. The company’s share price is currently more than 30% higher than it opened this morning.

Another biotech company that is doing well today is Iovance Biotherapeutics, Inc. (NASDAQ:IOVA). The company’s share price is up more than 27% in today’s trading. Among larger pharmaceutical companies, despite a market capitalization of nearly $50 billion, Regeneron Pharmaceuticals, Inc. (NASDAQ:REGN) has gained 5% so far today. This gain is more than six times higher than the company’s 0.7% gain over the previous 12 months and nearly one third of the 17.8% gain over the previous three years.

These three pharmaceutical companies above are just a few of the stocks delivering gains in a down stock market. Regardless of the overall stock market direction, there are always a few equities that will go against the trend and deliver gains against the downtrend. Therefore, investors should conduct detailed market analyses and due diligence to identify these stocks that can at least prevent losses or even deliver gains in falling markets.

Bryan Perry discusses the many reasons why there will be a bumpy road for the bulls ahead.