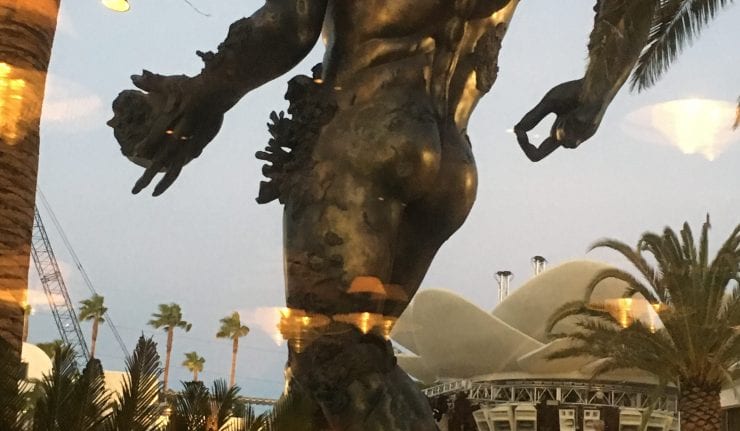 Perhaps it’s the warrior sheepdog in me, but when someone attacks a person I love and falsely accuses him or her of mass murder, well, you can bet you are going to get an aggressive response. Oh, and when that abhorrent allegation comes from the New York Times, well, then it’s even more incumbent upon me to unsheathe my rational sabre and begin thrusting.

In his column on Oct. 22 column, originally titled, “How Many Americans Will Ayn Rand Kill?”, opinion writer and Nobel Laureate, Paul Krugman, blamed Rand’s ideas on freedom as being at the root of the coronavirus pandemic and its increasingly high U.S. death count in the United States. I say “originally titled,” because even the New York Times realized, after pressure from those with views such as mine, that this was a disgusting smear of a headline. The new title is the much more benign as it states, “When Libertarianism Goes Bad.” While this is also a false accusation, it is far less accusatory.

Here’s how Krugman mentions Rand in the article, alongside an obligatory slight to President Trump, after chronicling the recent rise in coronavirus case counts in many parts of the country:

“But why does this keep happening? Why does America keep making the same mistakes? Donald Trump’s disastrous leadership is, of course, an important factor. But I also blame Ayn Rand — or, more generally, libertarianism gone bad, a misunderstanding of what freedom is all about.”

Krugman goes on to imply that Rand’s views are somehow equivalent to “science denial,” and that concepts such as “freedom” and “personal responsibility” are at the heart of the devastating damage from COVID-19.

This is such an inaccurate caricature of Rand’s ideas that even Krugman himself had to back off on this point, effectively admitting as much in one of his replies to a reader comment on the New York Times website. Here, Krugman replies to a thoughtful comment (see below) by saying, “I don’t think it matters what Ayn Rand actually meant; it’s how the modern right reads her.” 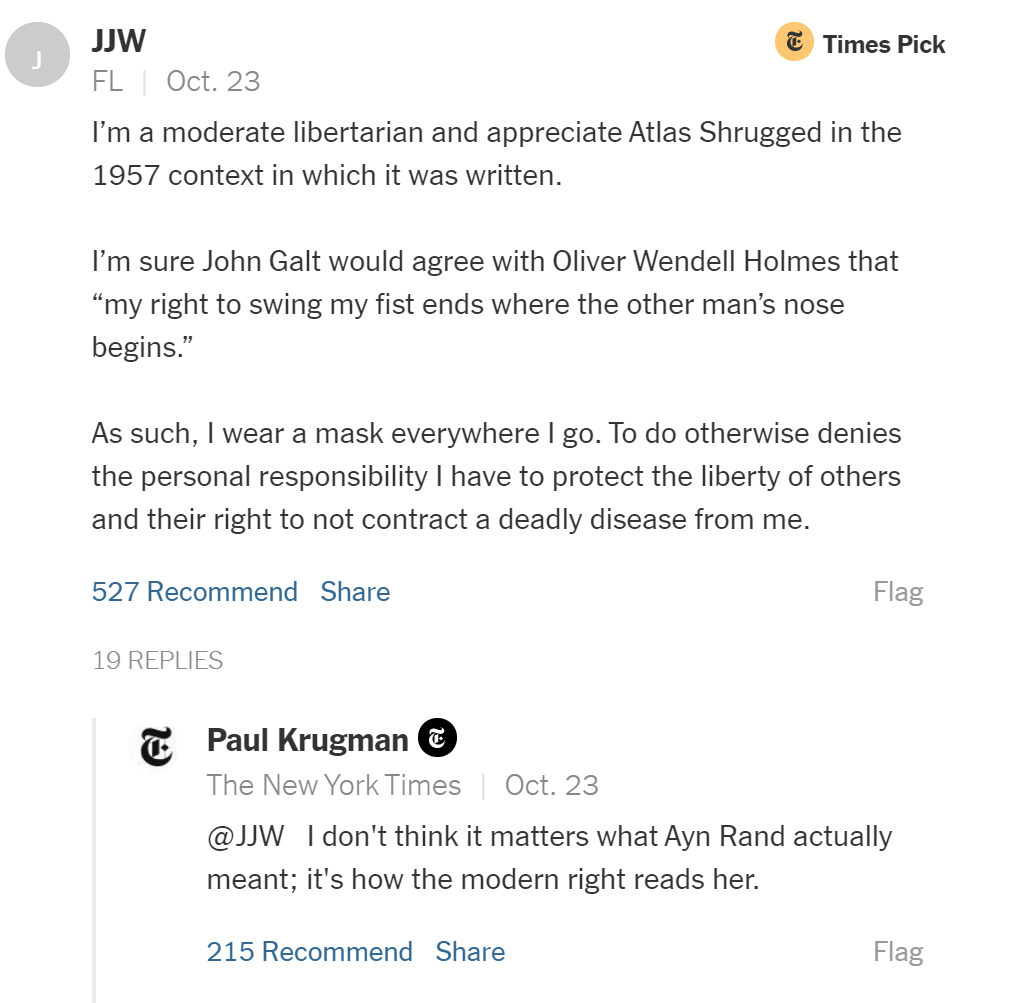 My response here is that it absolutely does matter what Ayn Rand actually said, what she stood for and what her ideas actually mean. What doesn’t matter, at least from the perspective of objective reality, is what leftist smear mongers such as Krugman want to twist her ideas into.

Of course, it does matter, from a societal standpoint, and from an intellectual battle perspective, but try as Krugman may to distort them, Rand’s powerful views are out there for all the world to see for themselves in her best-selling novels, The Fountainhead and Atlas Shrugged, as well as in her many works of non-fiction that cover metaphysics, epistemology, ethics, economics, politics, aesthetics and the application of her views to the current events of her time.

This grand an undertaking is something that I suspect Krugman fears, because he is smart enough to know that out of all the voices that stand in opposition to his worldview, Rand’s is the most important and most threatening. Why? Well, because as Rand scholar Onkar Ghate, senior fellow at the Ayn Rand Institute, commented during a video presentation with fellow Ayn Rand Institute scholar Elan Journo:

“He [Krugman] knows the one thinker that opposes him on moral grounds, that challenges his whole moral framework, that in America we should not be living for the common good, we should not be sacrificing our interest but rather pursuing our own happiness, she [Rand] is the only one that makes the moral argument against a mixed economy, against the welfare state, and that’s an argument he doesn’t want to face head on, he doesn’t want to face that someone is challenging him morally that what we are doing is all wrong.”

Indeed, this isn’t the first time Krugman has gone out of his way to mention Rand in his work. This fact is quite revealing. Of course, today’s mention of Krugman in this column also isn’t my first takedown of his views. Almost three years ago today, I blasted Krugman on his criticism of the Trump tax plan. While Krugman was lamenting that the plan favors the rich, I argued that this shouldn’t be a lament. Instead, it should be a salient virtue. Here’s how I framed it:

“Indeed, one of the most aggravating accusations levied against the Trump administration and the GOP’s tax reform proposals is that it favors the rich. I say aggravating, because that criticism is analogous to saying that the lunch special at the Chinese buffet favors those who eat a lot. Of course, the tax plan, i.e. tax cuts, are going to favor the rich. That’s because it’s the rich who pay the taxes.”

As I mentioned in that piece, Krugman knows that the overwhelming majority of income tax revenue that is collected by the federal government comes from the richest Americans. But he just thinks that, rather than a tax cut to those who pay the most, tax policy should be aggressively punitive, and that the money that is collected should then be redistributed via the government bureaucracy to the projects, policies and political goals of those who hold power.

And herein lies the essence of the dueling viewpoints between Rand and Krugman.

Now, if I am wrong about Krugman’s views, then I invite the professor to come debate me on the subject and tell me why I’m wrong. And if he’s up for debate, he also should accept the invitation from my friends at the Ayn Rand Institute, who have invited Krugman to come out from behind his smears, and debate any Ayn Rand Institute scholar of his choice regarding Rand’s ideas and the culpability of those ideas as it pertains to the coronavirus deaths.

Finally, and just for the record, Ayn Rand said just the opposite of what Krugman claims her views are. Here’s a quote from Rand during the Q&A session from her 1963 lecture, “America’s Persecuted Minority, Big Business”:

“If someone has a contagious disease against which there is no inoculation, the government would have the right to require quarantine.”

Hey, New York Times and Paul Krugman, if you are listening, print that!

P.S. The presidential election, and more importantly, our Post-Election Summit is just about one week away!

This private, in-person, “off the record” financial summit sponsored by the Investment Club of America. This confidential meeting will take place on Nov. 6-7 (right after the elections) in an undisclosed location in Las Vegas.

As it stands today, the election betting odds favor the Democrats. If the Biden/Harris ticket wins and the Democrats take over the House and the Senate, what will that mean for investors, entrepreneurs and the citizens of America? What happens if President Trump is re-elected, but the Democrats take control of both houses of Congress?

To help make sense of it all, we have brought together some of the world’s top experts to discuss the outcome of the November elections, including Mark Skousen, Hilary Kramer, Bryan Perry, and yours truly, to name just a few.