Five Big Debates at FreedomFest: Which Was #1? 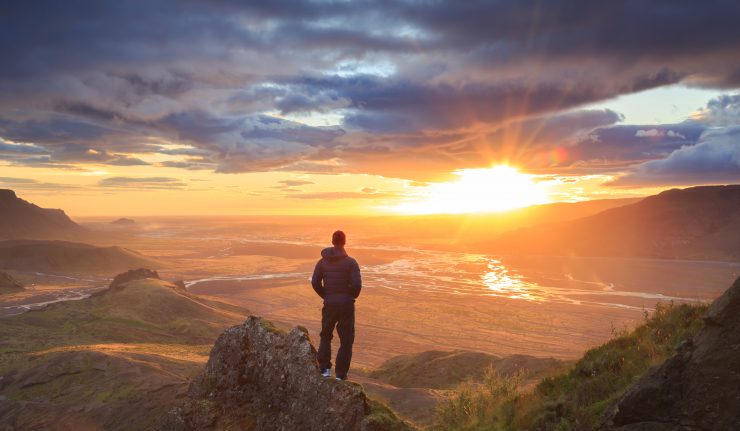 FreedomFest was a triumph this year, with over 2,600 registered attendees. At the same time, thousands of concerned citizens were watching the events live on FoxNation.

FreedomFest is famous for its debates. Genuine debate is becoming rare in America, but not at our show.

Debate #1: What is the Best Way to Beat the Market?

The first one pitted Alex Green, chief investment officer of the Oxford Club, and market timer Mike Turner on “Buy and Hold Versus Market Timing.” Does it pay to get out during a bear market, or even short the market, to maximize returns?

In the “The Maxims of Wall Street,” Mike Turner declares, “Buy and hold works if you live long enough, never need the money, and don’t mind losing 50% or more from time to time.” (p. 139; to order at a discount, go to www.skousenbooks.com).

Investors are sympathetic to those concerns, and we had a packed crowd for the debate.

The problem is that market timing — seeking to be in the market during bull markets and into cash or shorting the market during bear markets — is easier said than done. Few have successfully done it. Turner claims to be one of them.

The Problem of ‘Whipsaws’ with Market Timing

The challenge is that much of the time, the market’s trend is hard to predict. As a result, market timing strategies often lead to “whipsaws,” when the stock market goes above its moving average for a few days, but then falls below it, resulting in a loss — not a successful strategy.

In the past, Turner’s system has failed him, but he has improved it. Now, it is working better. It is particularly good when we go through a genuine bear market. He has a much tougher time making money in trend-less markets.

The Benefits of Dollar-Cost Averaging

After the debate, I pointed out that dollar-cost averaging is a very successful strategy to take advantage of downturns on Wall Street, and it even does well when the market is trendless for years.

Burt Malkiel, an economics professor at Princeton and author of the classic “A Random Walk Down Wall Street,” supports dollar-cost averaging as a good way to beat the market. It can even work when the market is going nowhere.

For example, during the lost decade of 2000-2010, when the Dow was stuck between 10,000 and 11,000, you can see that dollar-cost averaging made money because you buy more stocks when the market is down.

Another point is that right now, Turner is short the market, so he is missing out on the rally that is taking place right now.

Second Debate: ‘Should We Tax the Rich More?’

Another great debate took place on Thursday on the Mirage Main Stage, where actor/economist Ben Stein made the case that the rich should pay more in taxes. Ben Stein had previously appeared 20 years earlier as the keynote speaker at FEE Fest, the precursor to FreedomFest, in 2002.

We showed the famous clip of Stein as a boring professor in Ferris Bueller’s Day Off, where he referenced the Laffer curve as “voodoo economics.”

Then, Art Laffer, the economist who invented the Laffer curve, appeared on the stage, and we had a rip-roaring debate on supply-side economics and progressive taxation.

I moderated the debate. 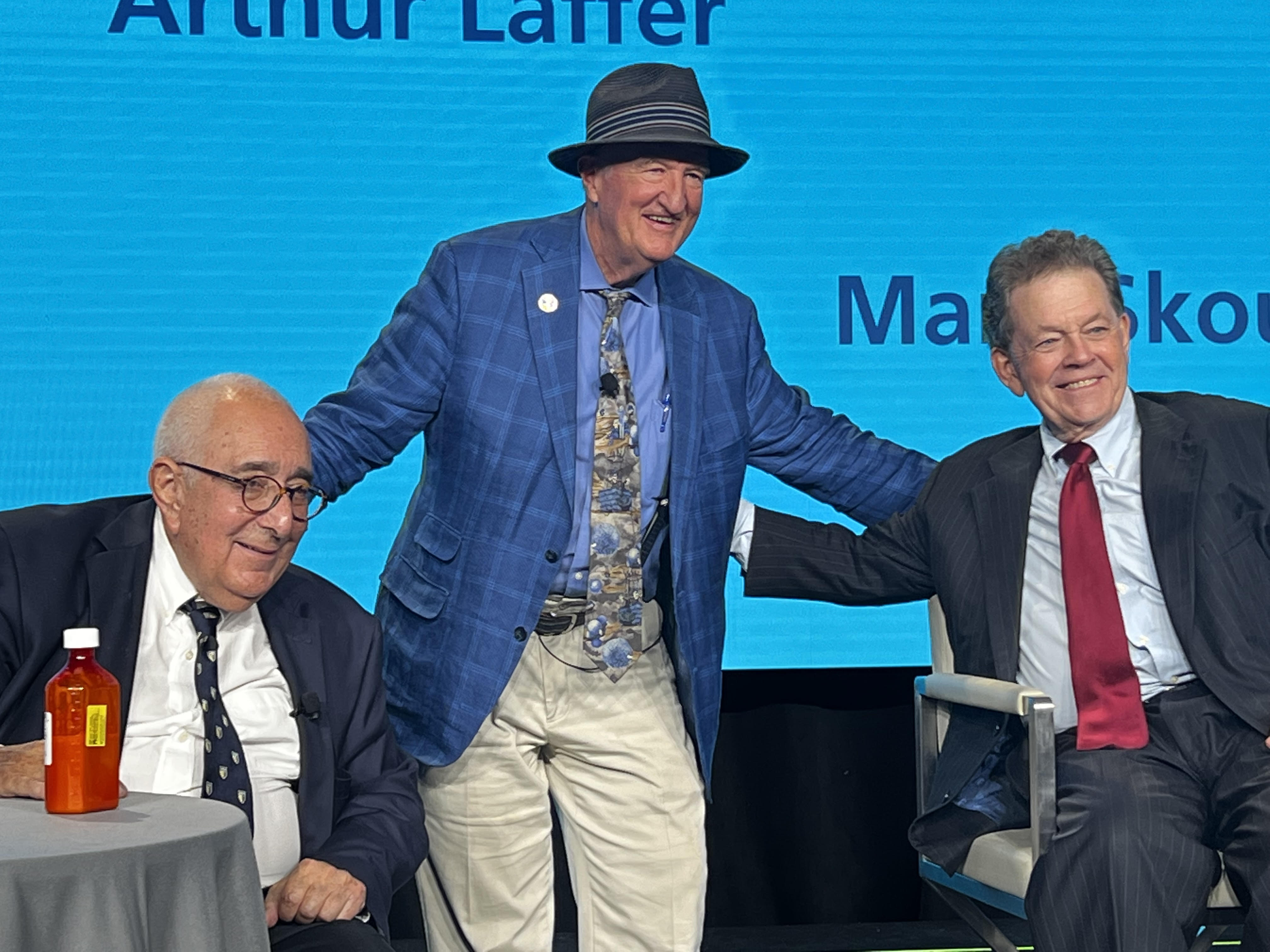 Like Laffer, Stein is an economist who favors less government and conservative values. However, he is a critic of “supply side” economics (a term invented by his father, Herbert Stein). He blames supply-side tax cuts for the growing federal deficits.

However, it should be pointed out that deficit spending became a serious problem under the influence of Keynesian economics in the 1960s, before supply-side economics was born.

Laffer pointed out that every time the rich were taxed more, economic growth declined, and when taxes were cut, the economy grew faster. He appeared to have won the debate. The last thing we need now is higher taxes on the rich — the successful entrepreneurs and capitalists.

Was the 2020 Election Stolen, and Should Trump Run Again?

On Saturday, July 15, the last day of the conference, radio personality Wayne Allyn Root debated reporter Isaac Saul on Trump’s claim that the 2020 election was stolen and that the former president should run again in 2024. National Review’s John Fund was the moderator.

It was the most controversial debate in Vegas. It sometimes became heated, with some audience members shouting down Saul for making the case against widespread voter fraud.

Should Trump be the Republican nominee for 2024? My question is: Why should Republicans choose a man with a damaged reputation when there is a Republican candidate out there with impeccable credentials (a graduate of Harvard and Yale), a Navy veteran, a former congressman and the current governor of the third-most populous state, Gov. Ron DeSantis of Florida?

Saving the Best for Last: My Creative Interview with Sen. Rand Paul

On Friday, July 15, I interviewed Sen. Rand Paul before an enthusiastic crowd. At the end, they gave him an instant standing ovation. It turned out to be the most popular event at this year’s FreedomFest in Vegas. Sen. Paul told me afterwards it was the most unique interview he’s ever done.

I showed the audience four clips from confrontations the senator had with Dr. Anthony Fauci on COVID-19 vaccines, Homeland Security Secretary Alejandro Mayorkas on disinformation, Assistant Secretary of Health Rachel Levine on giving transgender drugs to minors and George Stephanopoulos of “ABC News” on the 2020 election. Senator Paul gave his candid response to each one.

You can watch the video and all the other sessions at FreedomFest by purchasing the audio recordings. To order, call Harold at 1-801-414-1040.

FreedomFest Las Vegas was a Triumph!

I’m still overwhelmed by the success of this year’s conference in Las Vegas.

How to Order All the Audio Recordings

The enthusiasm was palpable, with over 350 speakers, 180 exhibitors and more than a dozen debates. To see the entire agenda, go here.

Next Year’s FreedomFest will be at…

We also announced that next year’s big show will be in:

Here is our three-minute video on FreedomFest Memphis:

Memphis is the headquarters of FedEx (founded and led by libertarian CEO Frederick Smith) and is famous for Elvis’s home Graceland, the Civil Rights Museum and rhythm and blues. Our theme is “The Soul of Liberty.”

We’ve already confirmed our first keynote speaker, Douglas Brinkley, an historian at Rice University who has written biographies of Ronald Reagan, John F. Kennedy and the Roosevelts, among others. He is known as America’s presidential biographer.

We are offering our lowest discount price on next year’s FreedomFest:. It is only $397 per person. That’s $100 off the “early bird” price. But you must register before Aug. 31. To do so, go here.

The Use and Abuse of Foul Language

“The subject skims the joy off the pan of conversation.” — John Steinbeck

Every year, we invite a celebrity to speak at FreedomFest. Past celebrities have included William Shatner, George Foreman and Kevin O’Leary.

This year, our celebrity was the English actor, comedian and producer John Cleese, who is famous for the “Monty Python” films and other irreverent comedies. 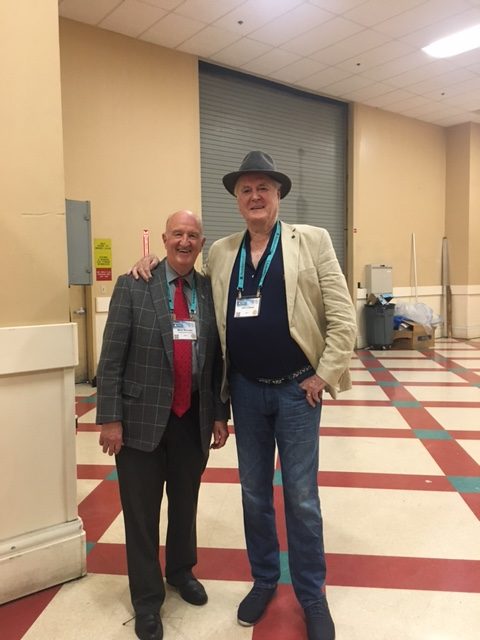 During the conference, I asked him if he thought our Western culture was in decline. He agreed. I used language as an example, especially the increasing use of swear words and vulgarities, especially the f-word.

I then asked him, “Will we come to a time when there will be no such thing as dirty words or foul language?”

He didn’t think so. He used the f-word casually in his speech at FreedomFest, but he refused to say the n-word when he brought it up. I took this to be a sign of the times.

He said he would use foul language in a comedy act or a movie, but not in a church. “It’s all about the context,” he said.

Unfortunately, the trend suggests otherwise. No longer are curse words or sexually explicit language limited to periods of anger. Today, dropping the f-bomb is so common that people think they can speak that way in front of anyone.

It’s a sad shift with regard to today’s society.

Whenever I go out to dinner with strangers, there’s always somebody who abuses language. I find it annoying, especially the fact that few of these people sense that others, such as myself, don’t use racist or gutter language.

So, I stop them and say, “Would you use the n-word to me or in public?”

Their answer is invariably, “Oh, of course not.”

I respond, “Well, that’s how I feel about the f-word.”

It usually stops them, and we can continue to have a pleasant conversation.