Today we saw a flood of alphabet soup data, with news on the Gross Domestic Product (GDP), the ADP report on jobs and the Federal Open Market Committee (FOMC) meeting. Let’s take each one as a separate bite here, and see what the implications are for the markets.

First, today we saw the continuation of lackluster economic growth, as the nation’s GDP expanded at an annualized rate of 1.7% from April to June. While that figure did best Wall Street estimates for a GDP increase of just 0.9%, I don’t think sub-2% growth is anything to celebrate. Moreover, we got a downward revision in the first quarter GDP growth reading to just 1.1%.

Now, I am happy that the economy is growing, albeit slightly, but this rather tepid growth rate certainly doesn’t justify the Dow trading near all-time highs. 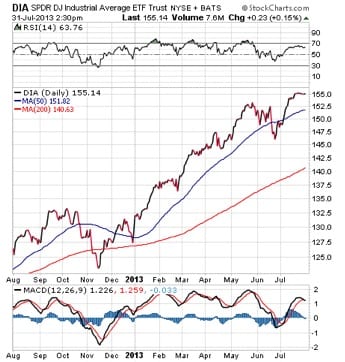 Earlier today, we did see a positive print in the form of the ADP payroll figures. The latest report showed that the U.S. private sector added a total of 200,000 jobs during July. That number is encouraging, as it shows that there is indeed some decent growth happening on the job front. However, the ADP employment data doesn’t really have a great track record of predicting the outcome of the most important data point that the Federal Reserve watches each day, and that is the monthly Labor Department employment data.

That data is due this Friday, and depending on how the print comes out, I suspect we will see traders move the needle on the news. The consensus estimate for job growth in July is 175,000 net new jobs, so if the official number exceeds that target it could be good for the markets.

Finally, today we got word from the Federal Reserve and the FOMC that the current bond buying scheme of $85 billion per month will continue. Nobody really expected anything else from FOMC statement today. When it comes to the Fed, if you don’t get surprised, that is good news.

As for the bond market, traders are still betting that the Fed will begin “tapering” its bond buying program sometime later this year, and that view continues to put pressure on long-term Treasury bonds like the ones held in the iShares 20+ Year Treasury Bond Fund (TLT). 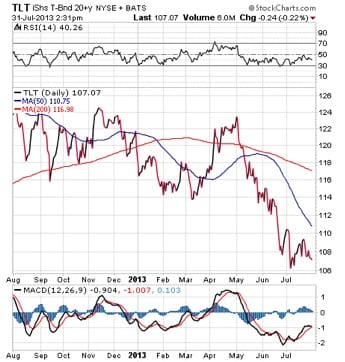 Interestingly, today’s FOMC statement effectively downgraded conditions in the economy, with the Fed saying that the U.S. economy is growing “only modestly.” The Fed did announce that it expects the economy to pick up later in the year, but if it doesn’t, and if the labor market remains under pressure, I suspect that any tapering either will be delayed or very modest going forward.

For now, the market is waiting on continued data to see if that will influence the Fed to make a change in current monetary policy. Until the data becomes clear, the market is likely to continue to bounce around current levels for the remainder of the summer.

The Perils of Being Dumb and Silent

“If the freedom of speech is taken away then dumb and silent we may be led, like sheep to the slaughter.”

Leave it to the genius of a Founding Father to remind us how important our freedoms are, and just what’s at stake if we ever were to relinquish our rights to political leaders. Remember this the next time someone tries to persuade you that a new law or curtailment of freedom is in the “public interest.”

P.S. San Francisco Money Show, Aug. 15-17, San Francisco Marriott Marquis: Join me and all the other Eagle editors (Mark Skousen, Nicholas Vardy and Chris Versace), plus William O’Neil (founder of Investor’s Business Daily), Frank Trotter (Everbank), Matt Schifrin (Forbes), John Bollinger, Chuck Butler and many others. There is no charge for this conference, but you do need to register. Call 1-800-970-4355, and mention code #031734.