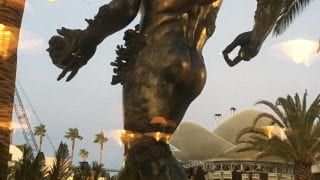 Nicholas Vardy has a unique background that has proven his knack for making money in different markets around the world.
share on:FacebookTwitter Google +
The new trading year got off to a solid start, with all of the major U.S. averages ending the week higher. As of Friday’s close, every major U.S. equity index is back above its 200-day moving average. The one exception is the small cap Russell 2000, which isn’t far away. In addition, the Dow has already surpassed its October high. More importantly, so has the Dow Transportation Index, which tends to lead the major averages.
All of these add up to a bullish technical picture for the U.S. stock market in the weeks ahead. That’s why I’m optimistic that the S&P 500 just might challenge its July high of 1,345 over the coming weeks. That said, with the S&P 500 overbought on a short-term basis, I expect the S&P 500 to pull back to its support level at its 200-day moving average this week — around 1,260. So, I’m going to hold off on any new recommendations, until we get a better entry point a week from now.
After this pullback, however, I’d expect the market to make a run to the July high of around 1,345. That surge would mark a 7% rally — a return that you could potentially double with your current holding in the ProShares Ultra S&P500 (SSO), a 2x leveraged bet on the U.S. S&P 500.
The rest of your Bull Market Alert portfolio is also poised to gain from any coming market rally. You already had big gains in Ford (F) this past week, up 9.64%, and Alexion Pharmaceuticals (ALXN), rising 4.89%. This was counterbalanced by losses in MasterCard (MA), down 9.35%, which is now technically oversold. I’ve moved MasterCard to a temporary HOLD. You were also stopped out of former Chinese high flyer Spreadtrum Communications (SPRD) at a loss, on the back of negative comments from its suppliers.

Alexion Pharmaceuticals (ALXN) rose another 4.89% last week as it continued making new 52-week highs. Bank of America also increased its price target on ALXN to $82. The target is 9.2% above the stock’s closing price on Friday. ALXN is a BUY. Raise your stop to $68.45.
Bank of Ireland (IRE) was unchanged over the past five trading days. Ireland’s banking crisis began nearly four years ago. In that time, the Irish government nationalized six major banks, but Bank of Ireland managed to remain independent. The cost of keeping those six banks afloat — a staggering 62 billion euros. That cost is a handsome sum for a country as small as Ireland. IRE is currently a HOLD.
National Bank of Greece SA (NBG) gave back 14.22%. NBG had a tough week in the face of several negative news items. A report on Wednesday noted that the Greek banking system would experience a “disorderly default” without a formal bailout deal and Standard & Poor’s lowered its rating on five “hybrid capital securities” owned by NBG on Thursday. NBG is a HOLD.
Companhia de Bebidas Das Americas (ABV) fell 4.73% last week. This darling of the major hedge funds experienced some significant profit-taking last week on no notable negative news. ABV ended the week just above its 50-day moving average and should bounce this week. ABV is a BUY.
ProShares Ultra S&P500 (SSO) gained 2.76%. SSO popped above its 200-day moving average last week and managed to hold on. If SSO can maintain this level, that staying power would be a very bullish signal for U.S. markets going into 2012. SSO is a BUY.
MasterCard Inc. (MA) gave back 9.35% last week. A few analyst firms noted “early 2012 earning headwinds” for both MasterCard and Visa, causing a sudden negative over reaction from investors, even as some analysts raised 2012 earnings-per share estimates for Visa. MA is technically oversold and currently trading at its 100-day moving average, having spent very little time below that level since April. MA also paid a $0.15 dividend on Jan 5. Trading below its 50-day moving average, MA is now a HOLD.
Ford Motor Co. (F) jumped 9.64% over the past five trading days, on the back of numerous recent positive news stories. Both analysts and executives expect domestic auto sales to increase between 4% and 9% in 2012 — the third year of increases in a row. Ford will also announce earnings on Jan 24 and will pay a $0.05 dividend on Jan 27. Penetrating its 50-day moving average, F is now a BUY.
Intuitive Surgical, Inc. (ISRG) remained relatively flat during its first week in your portfolio, losing just 1.20%. Analyst firm Collins Stewart reiterated its “Buy” rating on ISRG last week. ISRG also announced Food and Drug Administration approval to market a new surgical attachment for its flagship Da Vinci remote surgical device. The new attachment, called the “EndoWrist One Vessel Sealer,” allows surgeons to seal vessels remotely with great precision. ISRG will announce earnings on Jan 17. ISRG is a BUY.

previous article
Alert: Don’t Get Kicked by the Bull

[youtube_sc url="http://youtu.be/gUDf84SWDqA"] Tuesday was the inaugural day of 2012 trading, and we witnessed a whole lot of bullish action. In fact, I think that the New Year's Eve party that began last Saturday night in Times Square may have spilled over onto Wall Street on Tuesday. Markets were up big across the board, not only here in the United States, but also in Europe and Asia. The surge in stocks put the S&P 500 Index back above its 200-day moving average and, as I write this