With the Dow Jones Industrial Average flirting with 13,000, you’ll be surprised to learn that one of the greatest investors in history, Sir John Templeton, predicted that the Dow would one day reach 1,000,000.

That prediction is not nearly as outrageous as it first seems. In fact, I’ll show you why I think this forecast will be achieved a lot earlier than Templeton himself thought. But first, here are a few words about the life of John Templeton.

Sir John Templeton, who passed away in 2008 at the age of 95, was the original “Global Guru.” Templeton introduced me to the world of global investments when I picked up a book on his investment philosophy 20 years ago in Amsterdam. Templeton’s investment-pithy aphorisms, including: “the words ‘this time it’s different’ are the four most dangerous words in investment,” have stuck with me since Day One of my investment career.

In today’s Internet-connected world where buying a foreign stock traded on a foreign exchange is just a mouse click away, it’s difficult to appreciate what a pioneer Templeton was in the world of global investment.

Born in 1912, Templeton hailed from the South (Winchester, Tenn.), graduated from Yale in 1934 and won a Rhodes Scholarship to Oxford. After studying law in England, Templeton embarked on a whirlwind journey that took him to 35 countries in seven months — a watershed event that exposed him to the enormous investment opportunities outside of the United States. He returned to Wall Street in the depths of the Great Depression to start his investment career in 1937.

In his very first display of his famous contrarian streak, Templeton soon borrowed a then-princely sum of $10,000 as a 26-year-old investor and bought shares of 104 European companies trading at $1 a share or less. The year was 1939, when German tanks were rumbling into Poland. Though dozens of companies were already in bankruptcy, Templeton held on to each stock for an average of four years and made a small fortune. Only four companies out of the 104 turned out to be worthless.

In 1940, Templeton bought a small investment firm that became the early foundation of his empire. He went on to build an investment management business whose name became virtually synonymous with value-oriented global investing. He eventually sold his funds to Franklin Resources for $913 million in 1992. Templeton’s investment track record was impressive. A $10,000 investment in Templeton Growth Fund in 1954 grew to roughly $2 million, with dividends reinvested, by 1992. That works out to a 14.5% annualized return since its inception.

John Templeton: Contrarian to the Core

Templeton was perhaps best known for investing in Japan in the 1950s when “Made in Japan” was synonymous with free toy trinkets hidden in cereal boxes. Central to his investment philosophy was to buy superior stocks at cheap prices and at points of “maximum pessimism.” He diligently applied this approach across a range of countries, industries and companies. As Templeton noted in a 1988 Forbes magazine interview, “People are always asking me where the outlook is good, but that’s the wrong question. The right question is: ‘Where is the outlook most miserable?'”

And like all great investors, Templeton was not afraid of big bets. At one point in the 1960s, Templeton held more than 60% of the Templeton Growth Fund’s assets in Japan. That kind of a concentrated position in a global fund would be impossible on Wall Street today. At the same time, Templeton also had the savvy to exit markets when they were overvalued. He had no problem selling out of Japan — the market in which he made his first fortune — well before it collapsed in 1989.

My favorite Templeton anecdote was his bet against the U.S. technology bubble in 1999. Templeton famously predicted that 90% of the new Internet companies would be bankrupt within five years and he very publicly shorted the U.S. tech sector. It’s a terrific irony that John Templeton — a value investor knowing for sussing out little known global opportunities — made his quickest — and possibly biggest fortune by shorting U.S. stocks.

What I found most sympathetic about John Templeton is his relentless yet realistic optimism.

A few years before he died, Templeton asked a journalist to write about why the Dow Jones Industrial Average might rise to 1,000,000 by the year 2100.

On its face, that prediction sounds absurd. Yet it turns out that thanks to the miracle of compound interest, the Dow would only need to rise about 5% per year to hit that level in 88 years.

And that’s a conservative estimate. Even with the wilting stock market performance of the past 12 years, over the long term, U.S. stocks have achieved a 9.5% average annual return since 1926.

So, as long as U.S. stocks revert to their long-time average returns, the Dow will hit 1,000,000 by 2059 — a full 41 years earlier than Templeton’s conservative prediction.

And that’s something to be optimistic about. 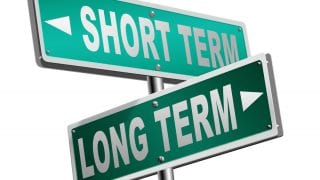 Be a Contrarian for a Day – and Win Big!

How to Get Rid of a Bad Idea (Democratic Socialism)