Tomorrow, May 8, Vermont Governor Peter Shumlin will sign into law a Genetically Modified Organism (GMO) labeling bill to go into effect in July 2016. Packaged food manufacturers, such as Kraft Foods Group Inc., ConAgra Foods Inc. and Hillshire Brands Co., object to the labeling law because such laws could potentially differ between states. Those differences will add to the costs of food production, whether in additional labeling costs or from sourcing new, GMO-free ingredients. Additionally, the perception created by the labeling might drive consumer behavior. Organic food sales have jumped year over year as that label has gained widespread use, generating $32 billion in revenue last year.

Led by a declining Twitter, tech stocks dragged the market to its third down day in the last four sessions. 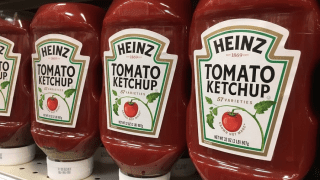 Kraft Heinz Share Price is Down More Than 50% in One Year, Buy or Stay Away? (NASDAQ:KHC)

Exclusive  Statistics Reveal Just How Wild the Robinhood Rampage Got