Doug Fabian is known for his expert knowledge of ETFs, bear funds and enhanced index funds to profit in any market climate.
[youtube_sc url=”http://youtu.be/LGZIBfg_ry8″]
The equity markets are down so far in April. Yes, you read that right; stocks have finally shown that they do, in fact, sell off from time to time. Although stocks were up early in today’s session, the major indices have suffered their first five-day losing streak in what seems like forever. The recent selling definitely is the first substantive pullback in stocks since the beginning of the year.
The April stock showers have come largely as a result of last week’s pitiful jobs report, which came in well below expectations. The light employment growth data shows that the real economy in the United States still is far from healthy. I’ve said in the past that until we get more Americans back to work and making money, we are going to have a hard time seeing a sustainable recovery in the economy, the housing market — and even the stock market.
In addition to the poor reading on the March employment front, trouble in Europe is really starting to rear its ugly head. Renewed fears heated up last week with the poor showing in the Spanish bond auction that saw the country sell only 2.3 billion euros worth of 4-8 year debt at yields sharply higher than previous auctions. Spanish bond yields now are back above 5.5%, and that situation is not good news for that country’s economy, or for the European Union.
During the past several months, I’ve been warning you about Europe, and about the precarious nature of the region’s debt issues. Could Europe’s fiscal chickens finally be coming home to roost? I suspect the better analogy is that investors here in theUnited States and around the globe finally are waking up to the fact that things aren’t all that great economically — either in Europe, or here at home.
Technically speaking, the S&P 500 Index has experienced its first dip below the 50-day moving average since last year. The chart below shows the sharp drop that’s occurred in stocks since the April showers began. Of course, that drop also has come after a near-relentless rise in stocks since December. 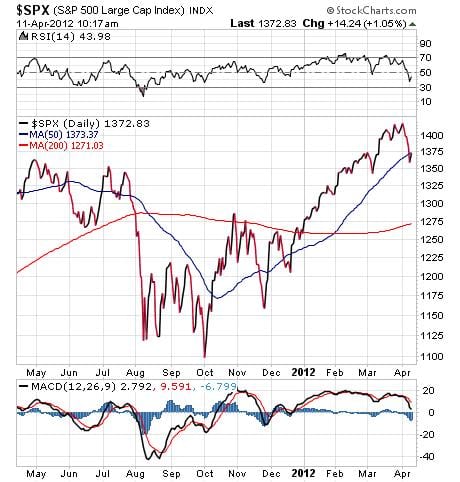 When it comes to stocks in the international sphere, the technical damage is much more pronounced. If we look at the chart below of the iShares MSCI EAFE Index (EFA), a benchmark for international equities, we see that not only has the index fallen below its 50-day moving average, it also has sunk below its 200-day average for the first time since last August. Note that when the 200-day average was breached in August, it was followed by a pronounced drop in the index’s value. 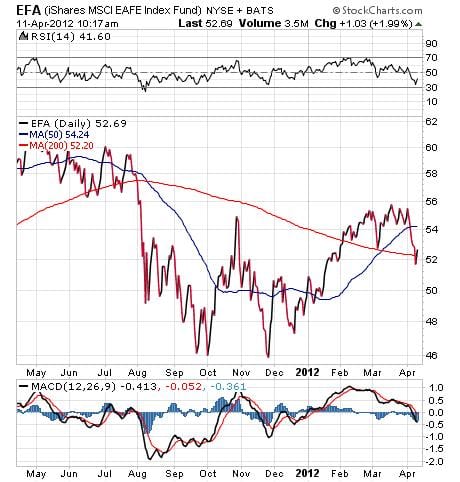 That drop happened as a result of Europe’s debt woes heating up, and that same scenario could be unfolding right now. I think the European debt mess is coming to a head, and now even the mainstream media is getting worried. Last Sunday’s telling “60 Minutes” television news report explained the extent of the European debt problem and its potentially devastating effect on the European Union’s political and fiscal stability. The report was just another sign that the situation now has reached almost everyone’s radar.
If we take a look at the data for country-specific ETF’s, we see that they now are well off their highs, and well below their respective 200-day moving averages. The table below shows the struggle that continues in many of the biggest country-specific funds.

I suspect that the next several weeks will be telling for the markets, as we start to get earnings reports from many of the market’s biggest companies. If these earnings reports are strong, the rebound in stocks could resume. If, however, there are significant signs of weakness on the horizon in terms of revenue and earnings growth, then we could see the April showers persist through the long, hot summer.

On Fools and Critics

“Any fool can criticize, condemn, and complain — and most fools do.”
–Dale Carnegie
The great motivational author knew it was a lot easier to complain than to take positive steps to change your life. The next time you get the urge to criticize and condemn, remember that any fool can do that. The wise man figures out a way to take deliberate steps to improve his lot in life.
Wisdom about money, investing and life can be found anywhere. If you have a good quote you’d like me to share with your fellow Alert readers, send it to me, along with any comments, questions and suggestions you have about my audio podcast, newsletters, seminars or anything else. Click here to ask Doug.
Exclusive  Six Socially Responsible Ways to Invest in Fertilizer Demand
share on: FacebookTwitter
previous article
3 “Crazy” Rules of Investing You’ll Never Hear From Your Broker
next article
ETF Talk: New Fund Offers High Income, Capital Appreciation