Investors’ Alert: Are You Making These Two Mistakes?

The first time I looked at the incredible chart below, I thought of the classic book, “Winning the Loser’s Game” by Charles Ellis. 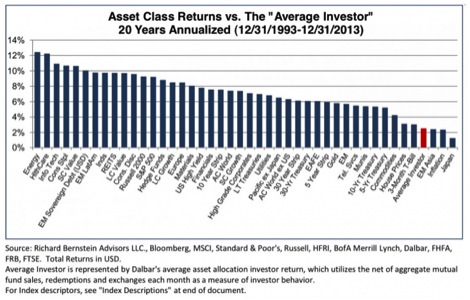 Last year, Richard Bernstein Advisors, using the research provided by Dalbar, put out a 20-year performance chart of most asset classes and compared it to the return of the “average investor.” Who are the average investors? They are individuals who buy and sell individual stocks, bonds, exchange-traded funds (ETFs) and mutual funds and are subject to all the “animal spirits” of pessimism and optimism that cause them to buy at the top and sell at the bottom. To determine how well or poorly they did, researchers at Dalbar systematically scanned mutual fund entries and exits to determine exactly when and where investors were getting into a wide allocation of assets.

It turns out that the “average investor,” as defined by Dalbar and reported by Bernstein, had a terrible batting average — about 3% a year over the past 20 years (1994-2014). The so-called average investors underperformed almost every index imaginable. Not only did they underperform the S&P 500 Index, but corporate bonds, energy, gold, emerging markets, utilities, you name it. Even investing in T-bills did better than the average investor! There was one silver lining: they outperformed Japanese stocks! But not by much.

What mistakes did the average investors make? Two critical ones: 1. They bought the wrong stocks, which underperformed the market. This became ill-fated “cherry picking.” 2. They traded stocks rather than adopting a sounder “buy and hold” strategy. Cherry picking and trading are always high-risk, but they are alluring.

You Blew It! TSA is a Terrorist Disaster Waiting to Happen

The Department of Homeland Security (sic) has found out a lot of ugly facts about the country’s most incompetent federal agency, the TSA. Earlier this month, the TSA flunked a test of its own screening of passengers when it failed to stop potential weapons getting through security checkpoints 67 out of 70 times. It turns out, TSA farsightedness is not only a problem when it comes to passengers, but airport employees, too. According to a federal audit, the agency failed to identify 73 airport workers “linked to terrorism.”

The report read, “TSA acknowledged that these individuals were cleared for access to secure airport areas despite representing a potential transportation security threat.”

The other sad fact about the TSA is that it wastefully uses taxpayer funds to employ two million (!) American workers! TSA is often said to stand for “Thousands Standing Around.”

I do give credit for the TSA recently relaxing some requirements and allowing more preferred travelers (first class, frequent flyers, etc.) to go through pre-TSA scanning. That has sharply reduced the waiting lines at airports.

Ideally, the TSA should be privatized with the right incentives to make travel secure without too much hassle.

Sadly, the two most common phrases today in America are “please wait” and “thank you for your patience.” I hear it the most at airports.

Do NOT Ignore This Lesson: What Warren Buffett Taught Me

As you know, I’ve always been a big fan of Warren Buffett. We don’t agree on everything, of course. He doesn’t believe in dividends, and I do. There are many ways to climb a mountain.

Every year, Buffett holds his annual shareholders’ meeting in Omaha, where the faithful meet to learn, socialize and celebrate the most successful investment company in the history of the world. My son and I made the trek in early May for the big 50th anniversary, and I learned a lot to improve my upcoming FreedomFest event.

I do something similar to what Buffett does in Omaha with my own conference in July — now only a month away, and the excitement is building! But once again, there’s a difference. I’m not the center of attention (thank goodness). Rather, I bring experts from around the world to talk about money, politics, business, healthy living, etc. Over 250 of them!

Bitcoin vs. Gold: Which is Better?

I’m now back in New York and had a busy week. At the Princeton Club, I met our co-ambassador Steve Forbes and George Gilder, who will speak on “Bitcoin vs. Gold: Which is Better as a Store of Value?” Gilder has written a long essay arguing that gold is still the best store of value, but I have my misgivings. Bitcoin has all the advantages of gold (limited supply, recognition, tradable, etc.), but at a much cheaper price. There are no storage or transaction fees with Bitcoin. Gold won’t go away; it will always be the monetary asset of last resort, especially if the electric grid goes down and you can’t transact business electronically.

I also had a long talk with Paul Krugman, the controversial New York Times columnist and #1 Keynesian economist, who is out for blood to defeat Steve Moore in our “Dream Debate of the Century” scheduled for July 9. I am meeting later this week with Steve Moore, who will take the other side in the debate. (I serve as the moderator.)

Last week, I also met Julian Bond, one of a handful of young men who marched with Martin Luther King Jr. Bond seemed thrilled when I told him of my plans to do a special event at our opening ceremonies July 8 at FreedomFest.

It means a lot to me to see my subscribers at FreedomFest. I urge you to make every effort to come. No excuses! (I’ve had subscribers postpone weddings, family unions, vacations and even surgery to attend FreedomFest!) Now is the time to act and make your reservations for “the greatest libertarian show on earth.” Our entire program of speakers, panels and debates is now posted online at www.freedomfest.com. Register online or call 1-855-850-FREE. See you in one month!

In case you missed it, I encourage you to read my e-letter column from last week on Eagle Daily Investor about what King Dollar means to investors. I also invite you to comment in the space provided below my commentary.

Ambarella Inc. (AMBA) has had an incredible run since I recommended it for a second time on May 18. The stock is up 41.39% since then. Today, I am recommending that you raise your stop to $111.85 to lock in at least a 40% gain in the stock.