A Tale of Three Charts: Is the American Dream Alive or Dead?

“I believe we can restore the American Dream and expand it to reach more people than ever before.” — Senator Marco Rubio

At this year’s FreedomFest (www.freedomfest.com) in Las Vegas next month (July 8-11), we are going to debate the question, “Is the American Dream Alive or Dead?” If it is on life support, how can we restore the American dream of a fulfilling, well-paying job, enough money to retire comfortably, a nice home and a stable government to grow a family and a happy life?

This is the foremost question I will ask, as moderator, at the Dream Debate of the Century on July 9, when Paul Krugman, #1 New York Times columnist and Nobel Prize-winning economist, confronts Steve Moore, #1 Wall Street Journal columnist and chief economist at Heritage Foundation. I will ask them what policies they would advocate to restore the American dream. You won’t want to miss this once-in-a-lifetime debate. Register here now or call toll-free 1-855-850-3733.

Here are three charts that paint a depressing picture of the U.S. economy.

First, we see that business creation has been in decline now for more than 30 years and, for the first time since statistics were collected, more businesses are failing than being created. As the Brookings Institute concluded, “But recent research shows that dynamism is slowing down. Business churning and new firm formations have been on a persistent decline during the last few decades, and the pace of net job creation has been subdued. This decline has been documented across a broad range of sectors in the U.S. economy, even in high-tech.” 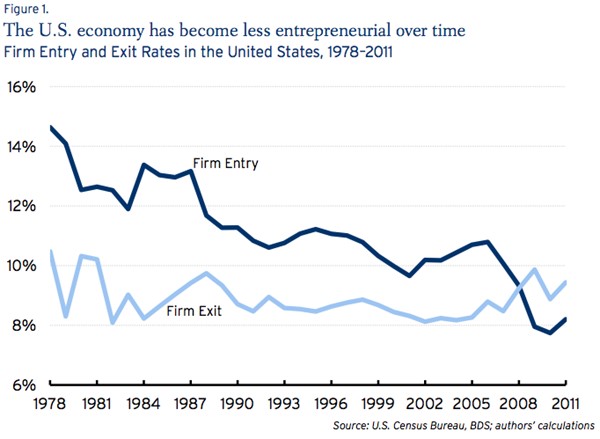 Second, community banks are disappearing, and new ones are not being created. Financial regulation is stifling banking activity and that situation is not a good sign for small business and entrepreneurship. 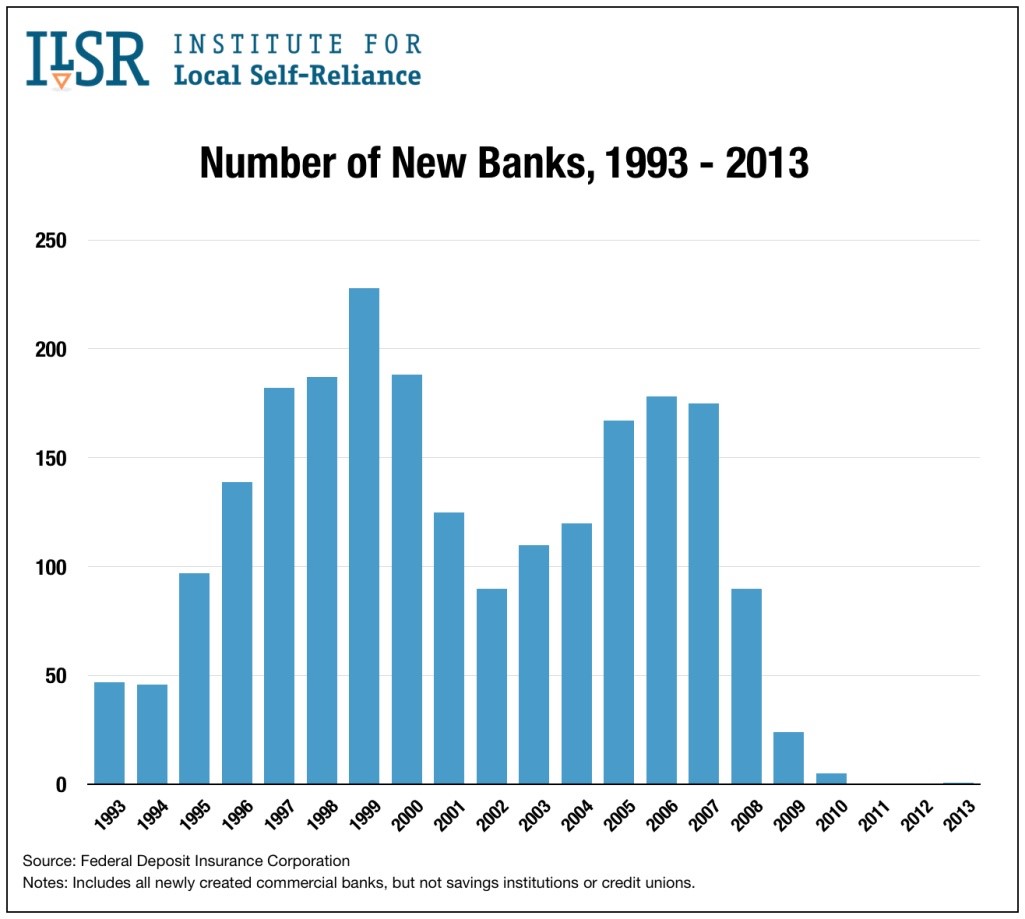 Third, Americans are dropping out of the labor market. 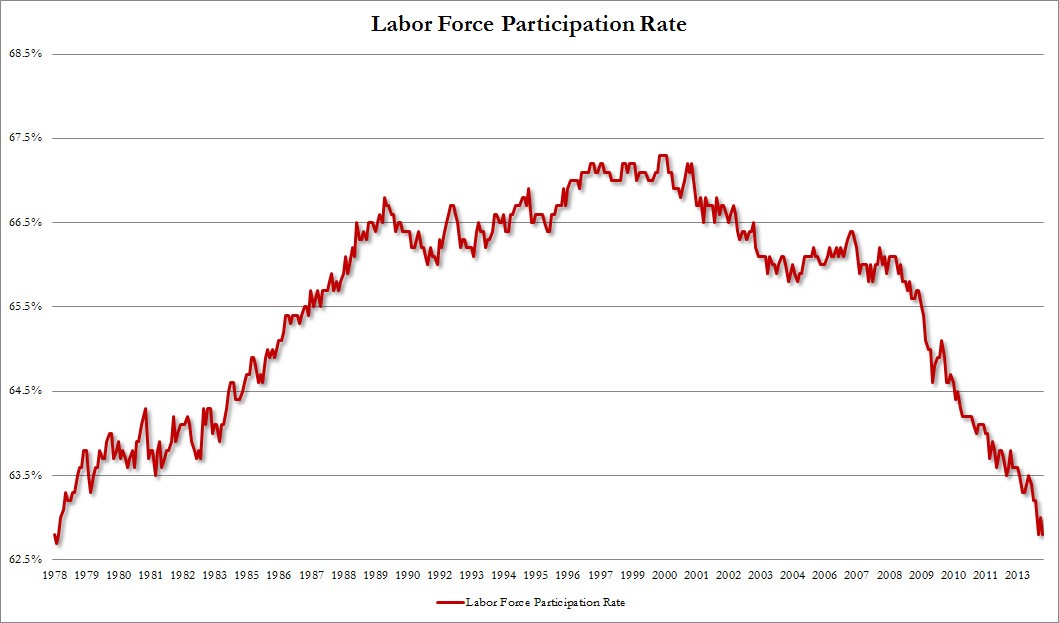 I look forward to the Paul Krugman-Stephen Moore debate at FreedomFest in July to get to the source of this economic malaise.

On a positive note, the stock market is at a record high and has recovered strongly since the Great Recession. But can it last? At FreedomFest, we are going to debate that too in our Bull vs. Bear Debate, which will occur after the Krugman-Moore Debate. See you there!

I watched with shock and embarrassment the announcement by Donald Trump that he was running for the White House. I dare say I’ve never seen anyone insult more people in 45 minutes than Donald Trump — calling all government officials “stupid,” insulting the Mexican people (personally, I’ve found them the most hard-working people I’ve ever met) and Chinese officials.

Trump is full of contradictions. He says he knows how to destroy ISIS practically overnight, but won’t say how.

He says he loves the Mexican people, then says they are drug dealers and smugglers.

He says he’s all for “free trade” then wants to slap a 35% import fee on all goods shipped into the United States.

He fails the test of a good economist. As Henry Hazlitt notes in “Economics in One Lesson,” a good economist looks not only at the short-term effects of a policy, but the long-run effects, and a policy’s impact on not just one group, but all groups. In the case of NAFTA and the free-trade agreement with Mexico, sure, the agreement resulted in some job loss in the United States, but it created new jobs in Mexico and in the United States, and all studies conducted about NAFTA show that both countries gained in terms of increased jobs and wealth on a net basis.

Big news! Everyone is coming to FreedomFest! We just landed the #1 contender for the Republican nomination for President, according to the latest CNN poll. “His charisma, personal story and youth have combined to make him the ‘it’ candidate for the GOP at the moment.” (Washington Post).

Senator Marco Rubio will speak Friday evening, July 10, in the Celebrity Ballroom, Planet Hollywood, right after Glenn Beck, on his new book “American Dreams: Restoring Economic Opportunity for Everyone,” followed by an autograph session. Here’s your chance to meet him in person. His topic and book fit perfectly with our theme this year, “Discovering the New American Dream.” 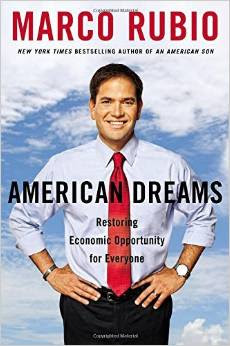 We feel honored that Senator Rubio has chosen to address FreedomFest, given his hectic schedule and incredible demand on his time. He is a perfect addition to this year’s big show, since he and Senator Mike Lee (who will be addressing us on Saturday) have co-sponsored a major tax reform bill reducing the tax rates to 15% and 35% while eliminating the dreaded marriage penalty and alternative minimum tax. And there would be no tax on capital gains! 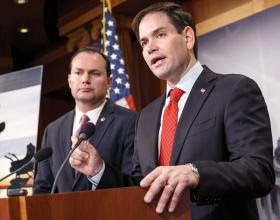 “Most returns can be filed on a postcard!” according to Senators Mike Lee and Marco Rubio, co-sponsors of real tax reform, who both will be speaking at FreedomFest.

Our program is now complete (click here to see all the speakers, panels, films and debates scheduled), the exhibit hall is packed with a waiting list, our Planet Hollywood room block is full (but we’ve arranged for you to apply the low $109 rate to the Paris Resort next door)….and we’re getting dozens of new attendees registering every day. There’s still time, but act now. Register here or call 1-855-850-FREE.

In case you missed it, I encourage you to read my e-letter column from last week on Eagle Daily Investor about mistakes that many investors are making. I also invite you to comment in the space provided below my commentary.

Your bet on cybersecurity play Qualys, Inc. (QLYS) on Monday shot out of the starting gates. The stock is up 9.27% over the past three trading days. With your September $45 call options (QLYS150918C00045000) up 57.33%, sell half of your options to lock in these quick gains. Hold on to the stock and your remaining options for potentially bigger gains ahead.