This Shipping Company Profits from China’s Need for Energy 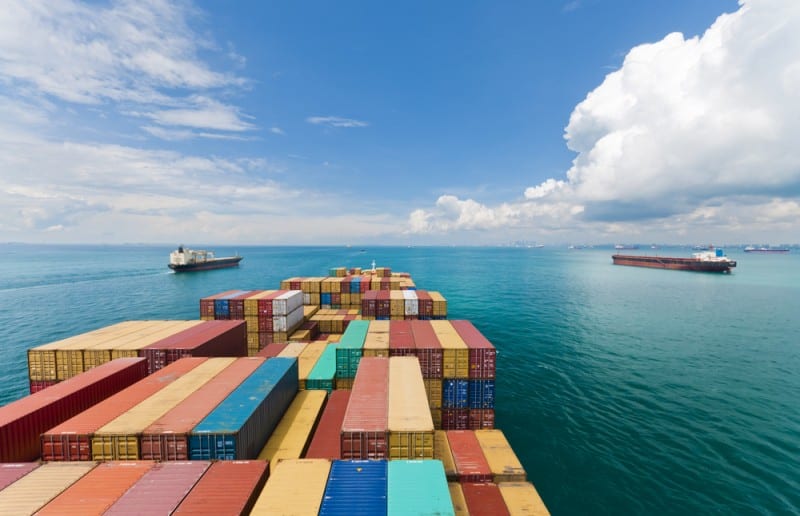 Although the October rally has recaptured the hearts and minds of the bullish camp, the major averages as a whole are barely positive for the year heading into the final 60 days. Investors have been through the Fed wringer all year and teased about a rate hike despite the dependent data clearly pointing to a general slowing of economic activity since the second quarter. Last week’s Fed statement following the Federal Open Market Committee (FOMC) meeting was again in keeping with the prior statements, pointing to December for a possible hike of a quarter point in the Fed Funds rate.

Underlying the 1.5% read on third-quarter gross domestic product (GDP) growth was a lag in inventory builds, which can be attributed to the 3.9% read in the second quarter due to a larger inventory build. Low interest rates and lower gas prices are beginning to translate into higher consumer spending, which accounts for two thirds of economic growth. So the Fed is targeting the consumer as a basis for finally getting what the central bankers have been yearning for and, if the forward data during November comes in as forecast, a year-end rate bump is a very possible scenario.

With this interest rate outlook in play, getting lathered up over a quarter-point hike is hardly warranted, whereas the importance of China’s economy showing signs of stabilizing is much more impactful to the United States and global equity markets. The recent third-quarter GDP read of 6.9% for China’s economy came in under the psychological 7.0% level, but the evidence of an economy transitioning from one of manufacturing/export to one more consumer/services oriented is taking hold. As the People’s Bank of China (PBOC) continues to cut interest rates and reduce the bank’s reserve requirements, the value of the yuan will experience further devaluation in order to make Chinese imports less expensive, thereby benefiting the Chinese consumer.

Speaking of Chinese imports, the country is ramping up its strategic petroleum reserves (SPR). China may add as many as 100,000 barrels a day of oil to strategic stockpiles this year and increase it to 200,000 barrels a day in 2016, according to a report in May from PIRA Energy Group, a New York-based energy consultant. The government has filled four sites in the first phase with 91 million barrels of crude, the National Bureau of Statistics said on Nov. 20. The second phase, which includes the Qingdao and Huizhou sites, is designed to take in 168 million barrels, according to Gao Shixian, a deputy director at the National Development Reform and Commission’s energy research institute. So how is all of this oil getting to China for storage? 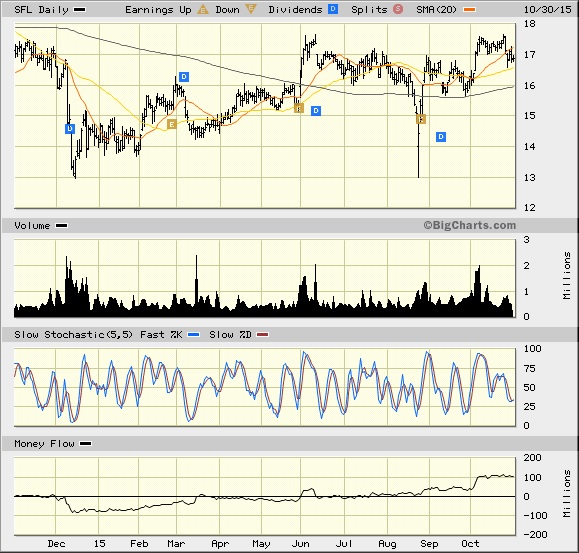 Investing in shipping stocks has always been a risky proposition as the day rates for ocean-going charters tend to be highly volatile. Ship Finance places more emphasis on longer-term charter rates as opposed to what are called the “spot market” prices. As such, revenue and profit growth are more stable quarter to quarter. And the one-year chart of SFL stock above attests to this more inherent stability.

Back in the month of June, the stock chart shows what is known as a “golden cross” where the 20-day and 50-day moving averages move up through the 200-day moving average, a very bullish technical pattern. And money flow also has been steadily improving to further support a move higher. The company is due to post earnings and declare its next quarterly dividend by the end of December and both events should bolster a further rise in the share price heading into these announcements.

Best of all though, the current dividend yield is 10.4%, a very attractive payout for income investors that are in agreement with this investment thesis. The current annual payout is $1.76 and the company is forecast to earn $2.06 per share for the next year, which provides ample coverage to support the lofty payout. The bottom line with SFL is if investors can collect 10.4% in dividend yield and the stock appreciates just 3 points from its current price of $17, 2016 could generate a total return above 25%.

In case you missed it, I encourage you to read my e-letter column from last week about the effects of the European Central Bank’s recent economic stimulus. I also invite you to comment in the space provided below.

previous article
Booking 56.91% Gains and Betting on a Small-Cap Breakout
next article
Have Commodities Reached a Bottom?

LNG Stocks Are in a Stealth Bull Market