Why Trump’s Election is Bullish for U.S. Stocks 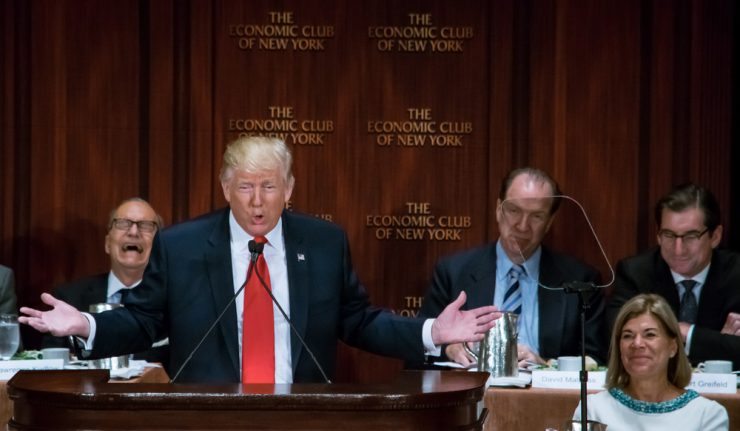 Donald Trump’s election as president of the United States caught the financial world off guard.

Perhaps investors should not have been that surprised. Two weeks ago, I wrote about six separate predictions of a Trump victory.

Despite some indicators that boasted a track record going back well over a century, predicting Trump’s triumph was deeply contrarian. Even the much-vaunted market-based predictions showed a greater than 75% chance of a Hillary Clinton victory.

At that time, I also suggested three investment strategies you could use to profit from a Trump victory.

One of those was a bet that the S&P 500 would sell off sharply if Trump won.

Instead, the U.S. stock market soared to its strongest weekly performance in recent memory.

So even though I was “right” about Trump’s victory, I was wrong about an impending market collapse.

The rationale for predicting a market pullback after a Trump victory was straightforward.

After all, global markets had tumbled after the unexpected “Brexit” vote in the United Kingdom on June 23. The Brookings Institution predicted an 8% to 15% drop in case of an unlikely Trump victory, while hedge fund Bridgewater Associates calculated a 10.4% fall to a specific decimal place.

A market collapse is indeed what happened — if only for a very short time. The Dow futures sold off over 800 points on the news of Trump’s election and the Japanese stock market plummeted over 5% in sympathy.

Then, after the shock and awe, financial markets began to rally sharply even before they opened.

Very few investors could buy the bounce after the sharp sell-off in the market futures after Trump’s victory was confirmed.

Even more surprisingly, U.S. stock markets continued to rally in the coming days. The small-cap Russell 2000 jumped more than 10%, closing a remarkable week. Warren Buffett, who campaigned for Hillary Clinton and famously called out Trump on his tax returns, added $6 billion to his net worth as Berkshire Hathaway’s stock soared to record highs.

But that does not mean it’s not worth looking back.

After the shock of Trump’s election, it didn’t take investors long to recognize that a pro-growth, pro-business and regulation-friendly administration is good for stocks. Throw in tax cuts and $1 trillion in infrastructure spending, and you have the makings a short-term economic boom.

The impact of this new reality on financial assets was clear.

The prospect of more government borrowing, higher interest rates and the return of inflation caused bond prices to collapse. Pundits have long awaited the signal that would end the 30-year bond bull market. Last week’s jump in interest rates and steepening of the yield curve just may be it.

The Trump rally also shifted the money into certain sectors of the stock market — most notably health care, financials, miners, industrials and materials. Health care stocks rallied on improved prospects for the repeal and replacement of Obamacare. Financial stocks climbed on prospects of less regulation, while mining and industrial stocks gained due to a likely spending boost on infrastructure.

If this script sounds familiar, it’s because it’s what happened after another Washington outsider, Ronald Reagan, was elected president in 1980. Reagan cut taxes, not spending, and took a hatchet to regulation. The ensuing economic boom marked the start of long bull markets in both stocks and bonds.

The Bullish Case for U.S. Stocks

While the actual impact of potential Trump policies is yet unclear, there are several positive signs for investors.

First, there are the general pro-business, pro-growth policies outlined above. A rising economic tide lifts all boats.

Second, Trump has control over both houses of Congress. That situation is historically rare for a Republican administration. In the years when that has occurred, stocks have gained an average of 14% per annum.

Third, from a purely market sentiment standpoint, the sell-off in the U.S. stock market before Trump’s election — nine straight down days — often results in significant gains a year later.

Could the Bear Roar?

It is easy to feel bullish after a market surge.

Still, a couple of caveats remain.

Second, the Reagan stock market boom did not start in an overvalued U.S. stock market. It was in 1979 that BusinessWeek famously declared the “death of equities.” Today, long-term valuation measures suggest that the U.S. market is trading near record highs. Even Donald Trump himself has suggested we are in a bubble.

Third, the big question mark for Trump is trade policy. By all conventional thinking, renegotiating free trade deals could negatively impact both U.S. and global growth.

Let me leave you with this final thought.

I’ve written before how I like to look at Economist magazine covers as contrary indicators.

Eight years ago, the world heralded Barack Obama’s election as U.S. president with a mania I then compared to the Internet Mania of 1999. 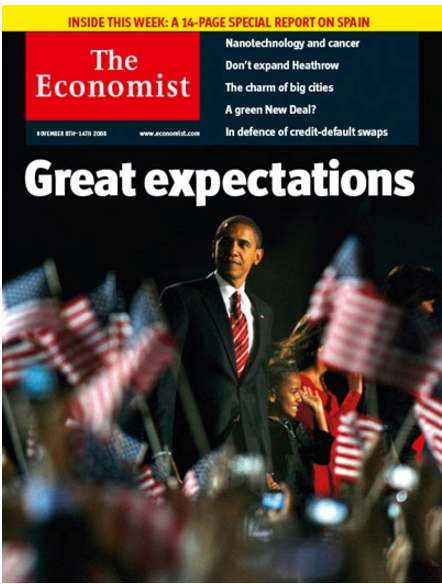 Today, it greets Donald Trump’s victory with both fear and loathing. 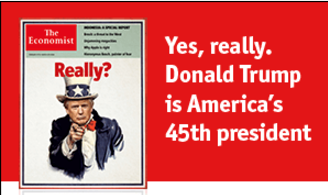 Whatever your political stripes, betting against conventional wisdom and mainstream media consensus can pay off in spades.

I’ll let you decide whether you want to back up the truck and bet big on U.S. stocks.

In case you missed it, I encourage you to read my e-letter column from last week about how this election has divided the United States.