This Is My New Favorite Economic Indicator

As an investor, newsletter writer and market commentator, I’m always on the lookout for a new way to look at the macro picture that will give me greater insight.

And while many of the tried-and-true indicators (moving averages, gross domestic product, 10s-2s spread, relative price strength) do a good job of telling us where markets are, and where they might be headed, there’s always a place for better, more precise (and more concise) tools.

Today, I am proud to introduce what is already my favorite new economic indicator, and it comes to us from my friend, colleague and macro-analyst extraordinaire, Tom Essaye of the Sevens Report.

Tom’s publications are required reading for any serious investor, and they are especially important for financial professionals who need to be able to explain to their high-net-worth clients what’s going in stocks, bonds, interest rates, commodities, currencies… and just about any major macro trend influencing the financial markets.

And because Tom has been spot-on over the years in his biggest calls, he’s someone who needs to be heard. So, when he introduced me to his latest invention, I had to share it with you.

The new indicator is called the Sevens Report Economic Cycle Index, and it’s a tool that gives us insight as to where we are in the economic cycle.

Indeed, one of the biggest question marks facing investors is whether we are at the end of an economic expansion or at the beginning of an economic slowdown.

Interestingly, it was last week’s comment by Caterpillar’s (CAT) management during the earnings call, where they said that profits had reached a “high-water mark” for the year, that brought this question to the forefront. The answer to this key question is critical, since it largely will dictate what we can expect from stocks, bonds and currencies over the next 12-24 months.

For the purposes of this discussion, we can forget about “Contraction” and “Recovery” because we’re not in those phases. Instead, the biggest question is whether we are nearing (but not yet at) the end of an expansion, or whether we are at the start of a slowdown.

Tom and I think there is a good case that can be made for both scenarios. Those who believe we are in an expansion will cite such things as solid absolute economic growth, rising earnings, rising inflation, still negative real interest rates and strong consumer confidence.

Those who believe we’ve just entered the start of a slowdown will cite things such as the Fed removing accommodation, economic growth losing forward momentum and a potential peak in earnings growth as inflation rises and, therefore, cuts into margins.

Up until Caterpillar’s “high-water mark” comments, the “Slowdown” argument largely seemed premature, given a lack of evidence. But the CAT comments provided the first anecdotal confirmation of that fear which, like a big endorsement for a fringe political candidate, has increased this idea’s credibility.

To be clear, getting this question answered correctly is very important. If we’re still in an expansion, then an eventual run towards S&P 3,000 isn’t out of the question. Conversely, if we are in a slowdown, the question is how long support at 2,550 will hold.

In developing the Sevens Report Economic Cycle Index, Tom wanted to try and determine the answer to this question by monitoring the facts, both economic, macro and markets based.

The tool he came up with is something I think provides a clear set of indicators that will help tell us, in real time, whether the economy still is in an expansion or if we’ve entered a slowdown. 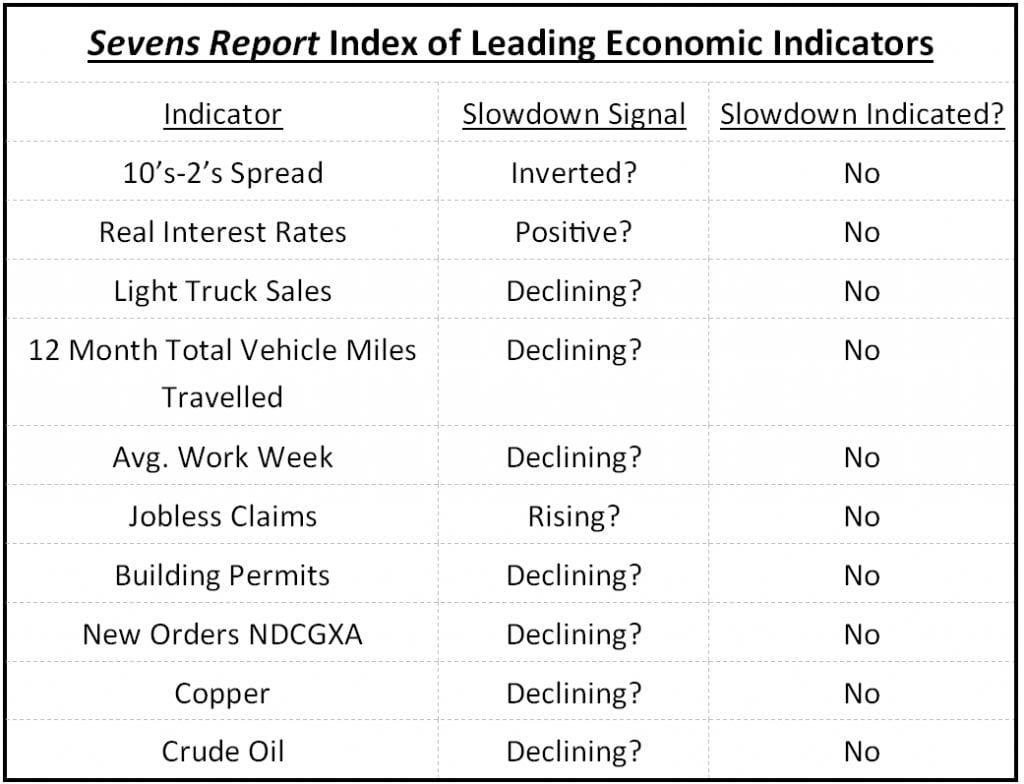 This index is comprised of 10 indicators, some macro based, some using hard economic data and some market based, that Tom believes will tell us when the economy has started to slow down. For the macro indicators (10s-2s, Real Interest Rates), we should be looking for violation of recession signals (inverted/positive).

For economic indicators (Light Truck Sales, 12 Month Total Vehicle Miles Traveled, Avg. Work Week, Jobless Claims, Building Permits, New Orders for Non-Defense Capital Goods Ex Aircraft), we should be looking for consecutive monthly declines in the data. And for market-based indicators (Brent Crude Oil, Copper), due to their volatility, we should be looking for multi-month lows (greater than three months).

Tom then assigns a score based on an aggregate signal, i.e., the more indicators that are indicating a slowdown, the greater the concern that we are transitioning out of an expansion and into a slowdown.

Looking at the inaugural edition of this index, you can see that none of these indicators are suggesting that the economy is in a slowdown.

Of course, this doesn’t mean that stocks can’t go down, especially over the near term. There are plenty of other factors (earnings, geopolitical tensions, Mueller investigation) that can stymie stocks in the short run. And, just because all these indicators aren’t signaling a slowdown, it doesn’t mean stocks can’t test recent lows.

Yet for medium- and longer-term investors, the set of indicators here in the Sevens Report Economic Cycle Index does provide us with a clear, fact-based mix of macro indicators, economic numbers and market-based measures of growth that both Tom and I believe will tell us when we transition from an expansion into a slowdown.

And when that transition occurs (and it always does), you’ll begin reading about it first in this publication, as well as my Successful Investing, Intelligence Report and Fast Money Alert advisory services.

The poet’s short, yet eminently powerful verse reminds us that human self-awareness can at times be a curse. Yes, the world is full of sadness, and every day we are legitimately tempted to feel sorry for ourselves. But my advice is to avoid that temptation. If you want your spirit to fly through the world, then be like Lawrence’s wild bird, and live until your final breath without ever having felt sorry for yourself.