Mexico Has a Whole New Plan

A new president, a potential new name and a whole new way to deal with drug violence might be the right plan for a more vibrant Mexican economy and market.

Mexico unquestionably has gained a bad reputation in the past few years. With drug trafficking taking over where the Columbians were forced out, Mexico has become the main source for illegal drugs for the United States with control of an estimated 90% of the underground market.

That business is so big that, according to a study a few years ago by the Congressional Research Service and updated by U.S. and British studies, it amounts to as much as $49 billion.

All of that money, of course, brings a whole lot of violence, both in response to government enforcement, as well as between various drug cartels. The murders continue to accelerate with the death toll soaring by more than 443% in just the last reported five years.

The impact on the economy and society of Mexico has been harsh. Tourism, always vital to the Mexican economy, has been dramatically impacted and business investment has been hindered as drug violence and related corruption limited interest in making more serious direct investment by both the public and private sectors.

The nation has perhaps had enough of the same plan to battle drugs and wants to try something new. And with a new general election, the voters cast out the PAN (National Action Party) of the outgoing President Felipe Calderon and returned the leadership of the PRI (Institutional Revolutionary Party) under the new President Enrique Pena Nieto.

President-elect Pena Nieto will take office at the first of next month and has pledged a change in the drug war. Rather than continuing to battle the local czars and gangs with little but bloodshed to show for it, the government will focus on controlling violence and make the economy the larger component. Already, the nation relies on the U.S. Customs and Border Patrol (CBP) and Drug Enforcement Agency (DEA) for enforcement of drug smuggling to the United States.

But the change on the Mexican side is to pull back from the harsh military crackdown on the cartels and gangs that was fueling the violence under the outgoing leadership of Calderon. In turn, by focusing on the economy and markets, the goal is to give alternatives to locals who have been swept up into the drug business out of need or lack of alternatives.

In addition, the incoming Mexican president is also calling for further legalization of some drugs beyond restricted medical use (as has been done in recent state referendums in the United States for marijuana) as a means to end the violence.

Pena Nieto is on a tour of the other members of the North American Free Trade Association (NAFTA). He recently met with President Obama and the Mexican leader next will be meeting the Canadian Prime Minister with the goal of getting his new focus underway with more trade and investment.

Adding to the change is a referendum that’s been put forward by the outgoing Mexican president to change the name of the nation from the “United Mexican States” to just “Mexico.” The origin of the original name has lost its meaning. With the hopeful new simplified name and new focus, the Mexican market perhaps is heading to a better place.

Not that Mexico is in trouble when it comes to the recent performance of its economy and markets. The overall gross domestic product (GDP) is running at an annualized growth rate of 3.3%, putting it way above the growth rate of the United States and in the upper echelon worldwide. With exports moving more globally and not just U.S.-centric, overall foreign sales are climbing at a rate of 13%.

This growth in Mexico is leading to an expansion of industrial production by some 2.4%, with the new manufactured goods orders index running at a positive rate of 52.3% to match the leading indicator’s positive expansion of 4.7%.

While the United States is battling its fiscal cliff budget battle, the Mexican government’s deficit is only running at 0.9% of GDP with overall debts of only 3.4 trillion pesos or $262 billion, with the vast majority being domestic and not foreign debt.

The markets are noticing. The peso is up against the U.S. dollar during the past 12 months by some 7.36% and the Mexican stock market, as measured by the IPC index, is up more than 29% for the trailing year to resume outperforming the U.S. S&P 500 during the past 10 years with returns of 516% vs. 84% for the S&P.

The starting point to put some money to work to capitalize on the new leadership and new focus is to look at a closed-end fund that has core holdings in the Mexican market. The Mexico Fund (MXF) has major holdings in food and beverage industries, along with local utilities and retail, with lesser holdings that could be hindered by a U.S. slowdown in mining and industrial groups.

That fund is income-focused with a dividend yield running around 9% paid quarterly. And while the local stock index has fared well, the Mexico Fund keeps going much better with just the last 12 month’s return exceeding 38%. Buy it for under $29 a share. 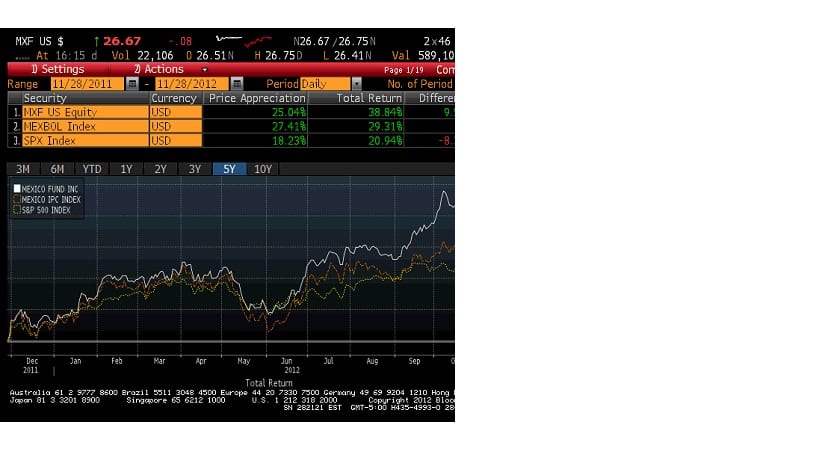 Defining the REAL Cost and the REAL Deal in Purchasing Property: A Comparison Between North America and Latin America

My Favorite Cultivator is Back

3 of the Best Cannabis Stocks to Buy Now

Selling Lamps to the Growers