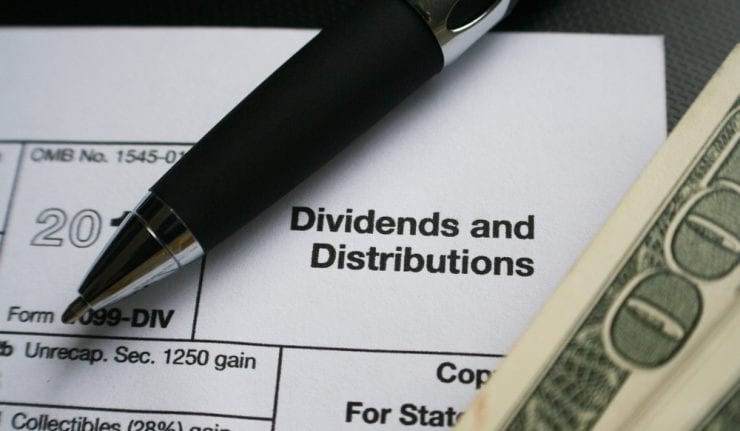 Yesterday, in what can only be viewed as a preemptive measure to keep the markets from seizing up, the Fed went ahead and slashed the short-term benchmark rate by a full 100 basis points. This dramatic move took the Fed Funds rate to 0.00%-0.25%.

In addition to the rate cut, the Fed restarted quantitative easing by purchasing $700 billion worth of Treasuries and mortgage-backed securities, while also striking a deal with five other central banks to lower their rates on currency swaps. This move made U.S dollars, the safe-haven currency in times of crisis, cheaper for banks around the world. The move will also keep global financial markets functioning in an orderly manner. Equity markets are viewing these moves by the Fed with great caution and trepidation as the phase “emergency action” has clearly spooked investors.

A full travel ban on all of Europe and possible, but yet-to-be-announced, quarantines on U.S. hotspots, as they are called, that have a high-propensity to spread COVID-19 will only make the investing public feel more anxious. The hour-by-hour updates that are fed to us by the media outlets have shown that the worst of the virus has yet to be felt, with Europe clearly enduring the fastest rise in the amount of people affected.

Just how serious is it? Well, Irish Finance Minister Paschal Donohoe is considering extra restrictions on pubs after footage of bars filled with drinkers in defiance of the guidelines have begun to circulate. As industry groups say that it’s impossible to police these guidelines, they expect an imminent shutdown ahead of Saint Patrick’s Day on Tuesday. This will spark massive hording of Guinness beer, Jameson Whisky, bangers and mashed potatoes.

As much of the world comes to terms with how to best cope with the onset of COVID-19 and the difficult course that will be required to contain and eradicate it, the open-ended discussion of how deep and wide the impact will be on business conditions is full of unknowns.

As of March 11, The Conference Board stated that, “Its current economic forecast assumes that the number of cases will peak in April and then begin to diminish. Under this assumption, we expect a sizeable disruption to certain areas of the economy over the coming two to three months — most notably travel, tourism and entertainment activities which account for about 7% of GDP [Gross Domestic Product]. Other sectors, such as restaurants and industries which are heavily dependent on global supply chains are likely to suffer as well. In particular, we forecast consumer spending to contract by 1.7 percent in Q2.

“Combined with other impacts, real GDP growth is expected to contract by 1.0 percent that quarter. The economy should begin to return to its long-term trajectory in the second half of 2020 as consumer spending rebounds. For the year as a whole, some significant economic damage is done as we expect real GDP growth to fall to 1.4 percent from 2.3 percent in 2019. But currently we see a full-fledged recession as the less likely outcome for 2020.”

This analysis feels about right for now. However, time will tell. 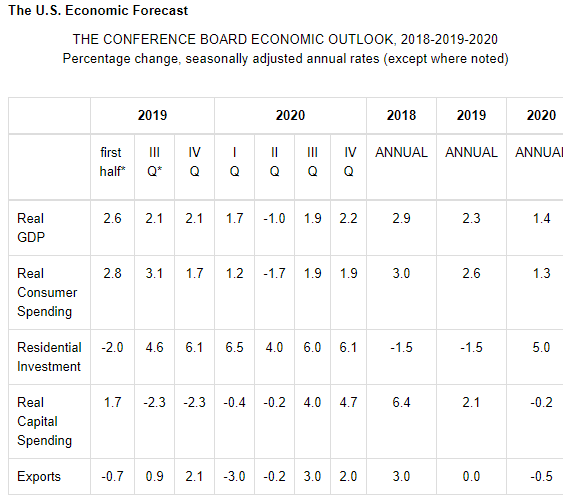 Having just traveled to Washington D.C., from my home in Richmond, Virginia, last week, my rail car on Amtrak had only six people in it. Union Station, which is near the U.S. Capitol, was sparsely occupied with travelers, and there was no one buying from the food trucks anywhere along the streets nearby. I feel a good deal of sympathy for these vendors and all the other “little guys” that are getting crushed by the vacant city streets.

What seems to be a more pressing matter is how the Fed plans to fight the fresh deflationary pressures that have been brought on by the sudden impact of the global slowdown in economic activity. Back on Jan. 5, European Central Bank (ECB) President Mario Draghi told a conference in San Diego that the eurozone risks falling into a Japan-like funk with negligible growth, low inflation and zero interest rates that do little to revive things.

“I believe that, for the euro area, there is some risk of Japanification,” Draghi said.

Fast forward to this week and Europe is now in a recession – there is no way to put any other spin on it. There will be at least two, maybe three quarters of negative growth for the eurozone, depending on several factors, the greatest of which is the coronavirus. This new reality has put European stock markets in an increasingly vulnerable position, whereas the trajectory for the U.S. economy was booming right before the virus hit. Thus, the American stock market is primed for a brisk rebound if the number of virus caseloads plateaus.

The bad news is that the United States risks falling into its own funk. At the same Jan. 5 event, Janet Yellen, the former Federal Reserve chair, talked of secular stagnation in the world’s biggest economy. It’s an outcome which former Treasury Secretary Lawrence Summers has long opined. They have both worried that the conventional tools used that are to boost growth — particularly easy central banks policies — will lose potency, as has been the case in Japan since the 1990s.

As the stock market has been addicted to financial steroids, it has needed ever-bigger doses to keep up the appearance of being healthy. In addition, 2020 was the year where earnings growth would justify 2019’s performance because the S&P 500 suffered from four straight quarters of negative earnings growth. Now, without a speedy recovery, the U.S. risks falling into a secular trend of flatlining growth and consumer prices.

The current relief package, H.R. 6201, also known as the Families First Coronavirus Response Act, has unleashed $50 billion to target the country’s medical needs. While it provides a financial bridge for small businesses, it won’t move the economy forward. It also isn’t clear if and how there will be government assistance to the devastated airline, hospitality and entertainment industries. Yet, it is safe to say that the extra $1.5 trillion in capital injections, which the Fed announced on March 12, will virtually open a firehose of credit lines to these and other stressed businesses.

According to The Wall Street Journal this past weekend, “Investors are fleeing stock funds at the fastest pace since the bruising market selloff at the end of 2018, while racing into government bond funds at a record clip. They pulled $47.4 billion out of global stock-focused mutual funds and exchange-traded funds in the three weeks as of last Wednesday.” Inflows into Treasury bonds topped $26 billion. The only period to ever see larger outflows was a stretch amid the financial crisis in 2008.

Exclusive  Making an Indirect Bet on the Housing Rebound

However, the outflows from stock funds for last week were “only” $4.7 billion — by far the slimmest drawdown during the current market slide. So, just maybe, we’re finally seeing some seller exhaustion — and Friday’s late rally would tend to support that notion. However, it is shocking to see how the stampede for the exits by investors in 2000, 2008, 2016 and 2018 all preceded the next major rally phase for equities.

With this mentality of “sell everything and ask questions later” in control of investor sentiment, what does this backdrop mean for investors who either desperately need investment income or don’t need income? Well, after the forced liquidation of all 11 sectors that make up the S&P 500, I would strongly argue that careful fund selection within the Consumer Staples (XLP), Health Care (XLV), Real Estate (XLRE) and Utilities (XLU) sectors is a prudent path to take.

Within the top 10 holdings of each of these exchange-traded funds (ETFs), one can find stocks that pay dividend yields north of 3% and some that pay above 5% — all with bulletproof balance sheets. We’re also talking qualified dividends (ex-real estate investment trusts) that are taxed at a maximum rate of 15% for those with incomes under $425,800 and 20% for those with reportable income at $425,801 and above.

Assuming the 10-year Treasury levels out at 1%, investors can receive three times the yield at a capped tax rate in addition to long-term capital appreciation. This is a winning formula for getting out of the market slump while taking full advantage of the disparity in yield between Treasuries that are taxed at ordinary rates and defensive blue-chip stocks with growing dividends. 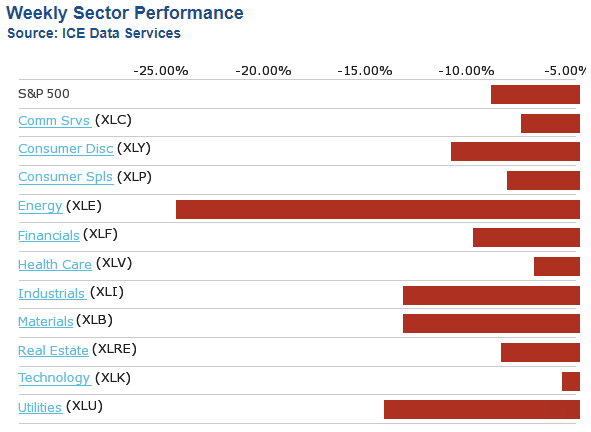 In what will also be a world where forward price deflation is sure to exist, the four sectors noted above will also likely endure the months ahead much better than the other seven sectors due to their recession-resistant characteristics. After all, they provide the things we need, not the things we want.

I warned you last week that cash is now king in Big Cannabis. Narratives that once revolved around projecting growth curves to the sky are now focused on making sure there’s enough money on the balance sheet to make it to breakeven. Tilray Corp. (NASDAQ:TLRY) will probably need until late 2021 (in the best case scenario) before sustainable cash starts flowing. That ramp has flattened out a lot as the goal remains elusive. A year ago, I would have said TLRY would be profi

Exclusive  The Third Wave in Real Estate -- Will it End Badly?