Fed Puts a $2.3 Trillion Floor Under the Market

Before getting too wrapped around the axle about all the dire forecasts for the economy and the stock market that are being published by the various media outlets, it’s important to know that economists are operating in a fog and the remote economy has taken over.

Economists and stock analysts are reverting to different ways to measure and forecast their outlooks, but there are obvious limitations. The result is extreme market volatility.

However, “the market,” as if it has a mind of its own, knows a lot and is extremely efficient at processing both good and bad news. While investors grapple with just how bad current conditions are going to be versus what the economy and the market will look like on the other side of COVID-19, it’s encouraging to see how “the market” has absorbed the attack by the bearish media that rivals Pearl Harbor in financial terms.

At that time, the attack by Japan on the Pacific fleet was devastating in the short-term. But in the long run, the war was won, great advancements were achieved, the economy roared back and America prospered.

The second quarter of 2020 will mark a time in American history where the economy stood still and, in many sectors, tanked. The most frequently updated data from the Atlanta Fed GDPNow Real GDP Estimate has second-quarter growth falling from 3.0% to 1.0% as of April 9. Blue Chip Consensus, which includes Wall Street firms like Goldman Sachs and JP Morgan, has forecast that gross domestic product (GDP) growth will decline by 2.3% or more.

For all intents and purposes, “the market” knows this.

Corporate buybacks have been the only net source of money entering the stock market since the financial crisis in 2008, according to Brian Reynolds, chief market strategist at the research firm Reynolds Strategy (Wall Street Journal — April 5, 2020) Since the beginning of 2009, Mr. Reynolds estimates that buybacks have added a net $4 trillion to the stock market.

Contributions from all other sources — including exchange-traded funds, foreign buyers, insurers, mutual funds, broker dealers, pensions, hedge funds and households — netted out to roughly zero, he concluded, based on the Federal Reserve’s quarterly flow of funds reports. The S&P 500’s market value is $20.9 trillion.

Companies across the board have suspended share repurchase plans to conserve cash, thereby removing what has been a main driver for the stock market as it struggles to find its footing after a hugely turbulent six weeks of trading. 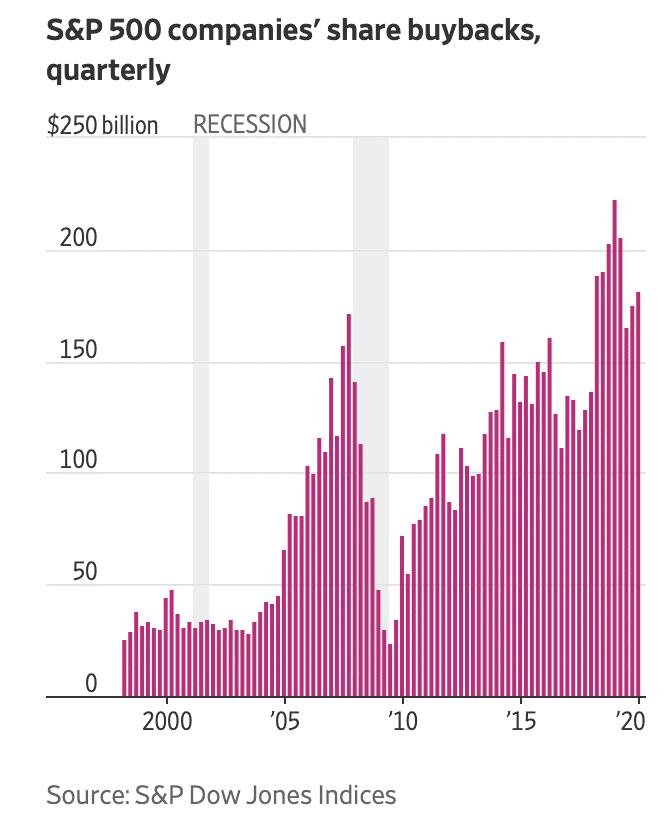 The 43 companies in the index that have already suspended their buyback programs — including banks, airlines, hotels and energy companies — represent about 25% of all the buybacks from 2019, Mr. Silverblatt estimated. To be sure, some of the biggest buyers of their own stock, including Apple and other tech companies, are expected to keep their programs alive. Again, this is not news and “the market knows this.”

Back on March 30, economists at the Federal Reserve Bank of St. Louis estimated that job losses from the coronavirus recession would reach 47 million and push America’s unemployment rate to 32.1 percent — more than 7 points higher than its Great Depression-era peak.

According to the Kiplinger data that was released on April 7, the unemployment rate is likely to peak at 12% or more while lockdowns persist.

As reported on CNBC April 9, JPMorgan Chase, the most influential investment bank on Wall Street, now sees the 16.8 million jobless claims filed in the last three weeks as indicating a huge surge in job losses, which they estimate will reach 25 million in April.

Here we are as of April 10, with the NYSE being carpet-bombed by bold-font headlines of dire circumstances for the labor outlook — once again, “the market” knows this.

Has all the perceived bad news been priced in? Probably not. The past week provided a firehose of fiscal stimulus news that was “essential” to securing a floor under the market. Fed Chairman Jerome Powell pulled one out of former Fed leader Ben Bernanke’s playbook and established what will be regarded in future business school academia as the “Powell Bid.” No business or asset class, big or small, should fail because of the virus.

The Fed stopped short of setting up a facility to buy municipal bonds from the market, only saying that it would continue to “closely monitor” that market. This suggests the Fed may act in the sector in the future. If politics serves as a template, those states that have been the most egregious offenders of fiscal prudence in the best of times (i.e. New Jersey, Illinois, Massachusetts, New York, etc.) will be considered too big to fail.

“Both the Fed’s repeatedly escalating credit market actions and Chairman Powell’s comments in a Brookings webcast on April 9 send a clear signal that if what was announced today is not enough, the Fed will come back with more,” Guha said in a note to clients.

Are S&P stock exchange-traded funds (ETFs) next on the Fed’s shopping list? Is a full “Japanization” of U.S. central bank policy in our future? Who needs corporate buybacks when the Fed is sitting on the bid? While the Fed is ostensibly barred from buying stocks without Congressional approval, it may be able to find a loophole that does not involve a legal expansion of its mandate. It has done so already to support the corporate bond market as, despite lacking a mandate, it is directly buying corporate bond ETFs.

While the Fed isn’t legally able to do this by itself, it’s making it happen through some creative financial engineering. The Treasury is officially the one making the purchases with the help of BlackRock via special purpose vehicles (SPV) that are financed by the Fed. So, the Fed is essentially acting as the banker to the Treasury, which is employing BlackRock as its broker to carry out the effective nationalization of parts of markets.

Are shares of SP 500 SPDR ETF (SPY) next on the Fed’s shopping list? I believe that “the market” knows this, too.