News of the Grand Reopening of America last week was complemented by President Trump signing $485 billion in additional stimulus money to keep the fire lit under what has been a remarkable rebound for the stock market.

The notion of a “V-shaped” recovery was all but confirmed by Apple CEO Tim Cook in his phone call to President Trump. In fact, President Trump recently said he and Cook speak directly.

“He calls me and the others don’t,” Trump said in August, according to Fox Business. “Others go out and hire very expensive consultants, and Tim Cook calls Donald Trump directly — pretty good.”

I do tire of Trump’s third person references. Habitual illeism tends to signal a number of personality quirks in the speaker, none of them good. But I try to stay focused on the message, which I support.

The Fed’s Bullard Is Among the Bulls Seeing U.S. Economic Rebound

Tim Cook is not alone. St. Louis Federal Reserve President James Bullard also recently said he saw “no reason” that the economy wouldn’t be able to recover in a V-shape, according to Bloomberg. It seems the market also has cast a strong vote for a pronounced economic resurgence as early as the beginning of the third quarter.

The S&P is up against its first major textbook technical test where a downward sloping 50-day moving average (orange) provided stiff short-term resistance last week after two attempts to punch through to the upside. Momentum is on the side of the bulls, while the charts favor the bears. 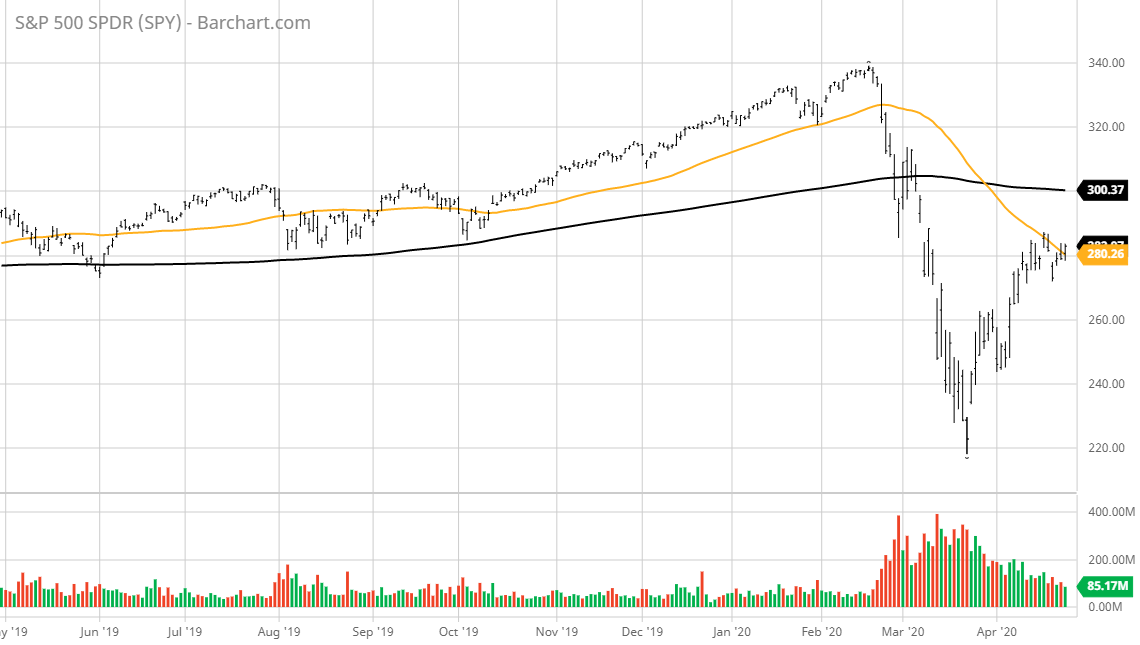 We’ll know soon enough who wins this technical tug-of-war. Earnings this week from Microsoft (NASDAQ:MSFT), Apple Inc. (NASDAQ:AAPL), Google’s parent Alphabet Inc. (NASDAQ:GOOG), Amazon.com (NASDAQ:AMZN) and Facebook Inc. (NASDAQ:FB) will either provide the firepower to lift the S&P to 3,000 or show that there is more wood to chop at lower levels.

On the subject of the economy, current data and corporate guidance seem to argue more for a “U-shaped” recovery. But at the moment, the Wall Street maxims of “don’t fight the Fed” and “don’t fight the tape” are ruling the investing landscape. Could it be that all the money in the world just wants to come to the U.S. markets and call them home? I think so.

Consider that the stock market, bond market and dollar index are all trading higher — along with gold! Go figure. Where is the rotation out of bonds and into stocks, or out of the dollar and into gold or out of gold and into the dollar? It is ALL working right now, save for the dead-cat bounce in oil within a well-defined secular bear market.

So, what’s behind the tandem move higher for U.S. bonds, stocks, dollars and gold? I’ll bet a country breakfast that there is some real fear surrounding the immediate future of the soundness of the European banks, many of which are now trading below their 2007-2009 lows. All the actions taken by the European Central Bank (ECB) to shore up the banking system in Europe have greatly failed to restore confidence — including well before COVID-19 broke out.

The Stoxx 600 Banks Index that comprises the largest and mid-cap banks throughout the European Union (EU) and the United Kingdom (UK) took out its 2009 low last week. Thus, I believe the flood of interest in U.S. assets is partly rooted in the financial tide going out in Europe. Gross domestic product (GDP) in the eurozone is contracting hard and bracing for the sharpest drop since World War II.

There are deep systemic and structural problems with greater Europe that could well lead to the dissolution of the European Union following Brexit. Europe is an absolute mess and, as the third-largest economy in the world, bears are closely monitoring how the region manages through the impact of COVID-19.

Large bank restructurings and failures across the pond will not go unnoticed in U.S. markets. And yet we live in an era of too-big-to-fail, so look for some nationalization of certain banks to occur and even more unlimited monies to be directed at this fluid situation by the ECB. The chart above suggests a hard landing is just ahead, and I’m not sure there is any way to avoid it. Hence the rush to the safe haven of U.S. markets.

Looking at the most plausible scenarios, whether a V-shaped or U-shaped recovery is the path forward, it’s a far cry more positive than the deep and lasting recession forecast for Europe.

Energy prices may bounce a bit more through production cut manipulation, but that market is now going through a major culling of the herd and price destruction in all subsectors of the energy space. Great news for consumers and businesses, bad news for energy investors.

Circling back to this week, look for the FAANG stocks of Facebook, Amazon, Apple and Google, along with the so-called MAGA ones of Microsoft, Apple, Google and Amazon, to have a clear impact on investor sentiment. Any negative reaction by the market (selling on the news) to these heavily crowded trades should be used to consider initiating and adding to blue-chip U.S.-based dividend and dividend growth stocks. It is the sweet spot for income.