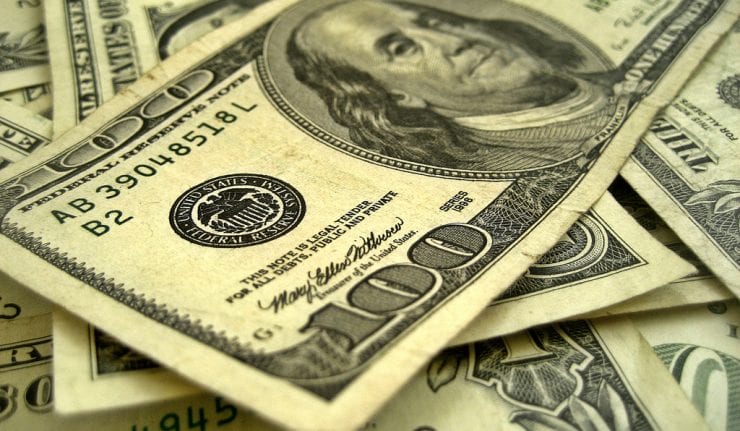 The parade of stimulus packages brought forth by the Federal Reserve and Congress may create as much as $10 trillion in debt when all is said and done.

And I use the word “done” lightly. The latest bill being campaigned through the Senate on Capitol Hill, named the Monthly Economic Crisis Support Act, was introduced in May by Sens. Kamala Harris, D-CA.; Bernie Sanders, I-VT.; and Ed Markey, D-MA.

This $10 trillion of additional debt would be stacked upon the current $25.7 trillion in existing debt. We can modify the old Pentagon budget saying to read, “a trillion here, a trillion there; and pretty soon we’re talking about real money.”

It is one mindboggling proposal that could put as much as $10,000 per month into American families’ hands to help them weather the coronavirus pandemic. In some ways, it’s a nod to universal basic income, the concept of indefinitely providing people with a guaranteed amount of money per month. But, the current plan calls for providing financial relief for only as long as the pandemic lasts.

It calls for sending $2,000 per month to individuals and $4,000 to couples, as well as $2,000 per child for up to three children. Those earning under $120,000 would be eligible for support, though the payments would be reduced for those who have income over $100,000. Hey, it’s an election year, so don’t be surprised if politicians promise that certain public drinking fountains may provide something other than water!

But even more alarming to many economic forecasters is the rhetoric emanating from Federal Reserve Chairman Jerome Powell, which suggests he and his colleagues have “a full range of tools” and, “when it comes to this lending, we’re not going to run out of ammunition.” He added, “We still have policy room in other dimensions to support the economy” and “we will provide essentially unlimited lending to support the economy.”

It is just amazing, but the stimulus has fueled the torrid rally. I mean, who doesn’t love unlimited money?

As stocks of all 11 market sectors have embraced the bullish uptrend, the U.S. dollar index (DXY) that trades against a basket of currencies (the Euro, the Japanese yen, the British pound, the Canadian dollar, the Swedish krona and the Swiss franc) has seen its value decline by about 5.8% since peaking on March 23, the same day the stock market bottomed.

To some, this would seem perfectly logical and really amounts to a whole lot of nothing based on pure rotation out of safe-haven assets and into risk-on assets. After trading at 103.0, the DXY closed last week just above a three-year moving average support line. And I would venture to say that, if the DXY were to trade below 96.0 for any length of time, the Fed would step in to buy dollars and support the currency. 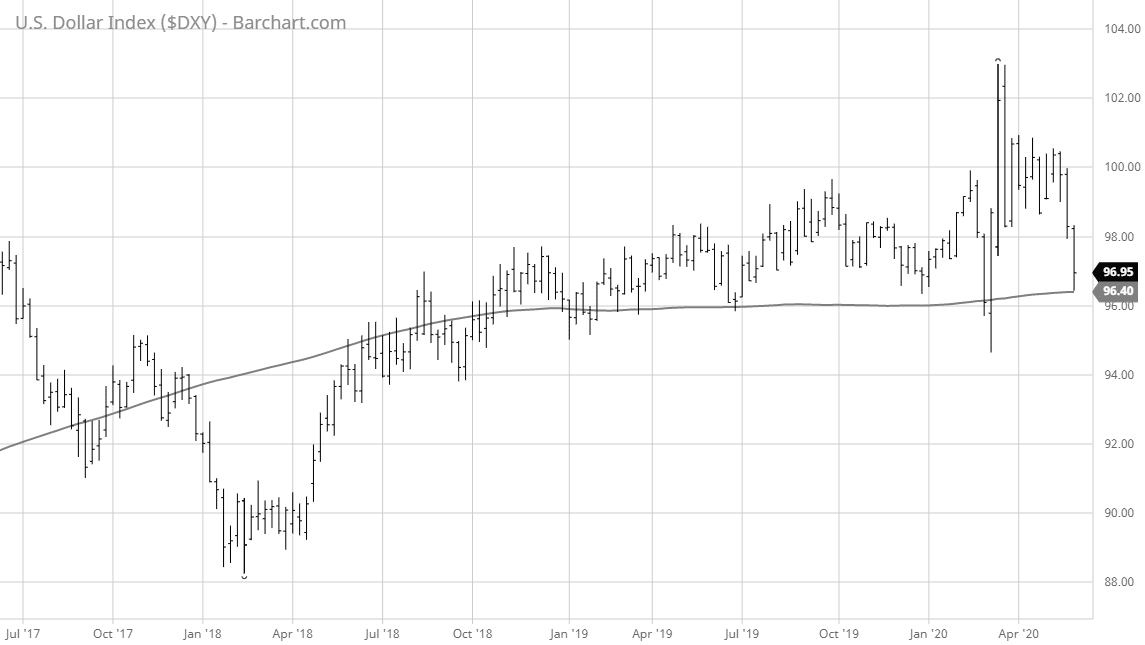 A technical breakdown of the dollar from current levels would call into question the ability to continue to print “all the money in the world” and what that would imply to the future of interest rates. A longer 50-year chart of the dollar index shows that in 2008, the market had the least amount of faith since the DXY has been tracked.

But what it also shows is that Fed intervention in 2008 caused a surge in confidence and a strong rally in the greenback. The Federal Reserve and other central banks reacted to the deepening crisis in the fall of 2008 not only by opening new emergency liquidity facilities but also by reducing policy interest rates to close to zero and taking other steps to ease financial conditions. Sound familiar? 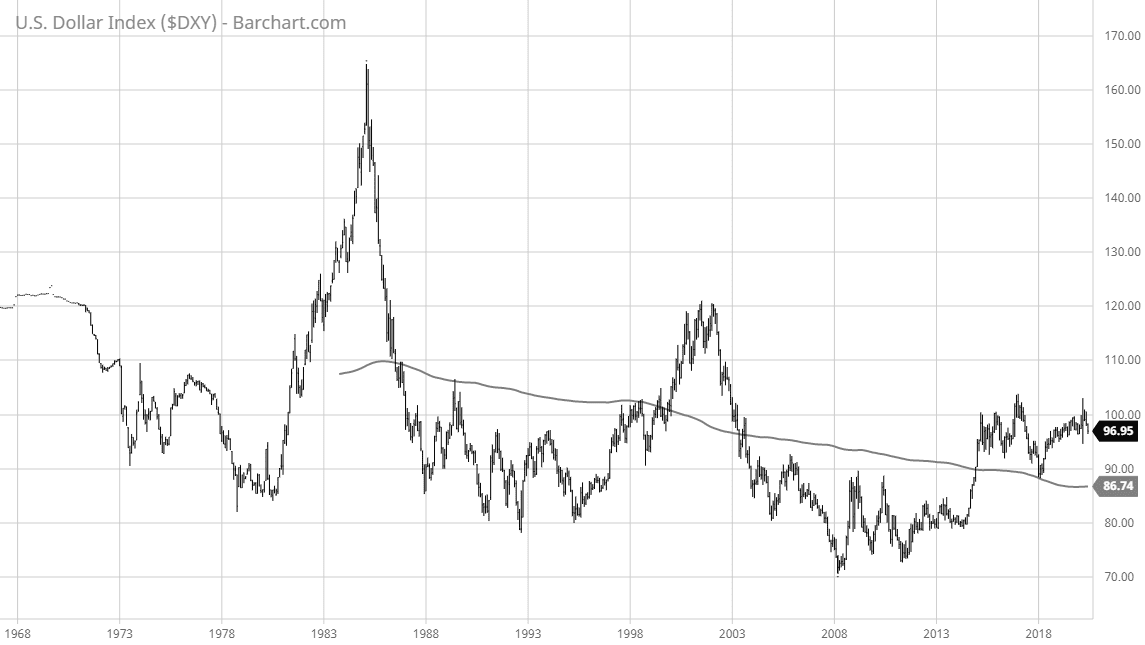 Treasury Secretary Steven Mnuchin said the United States plans to increase its issuance of the 10-year, 20-year and 30-year bonds to extend the length of time the United States has to pay off its debt. He said the Treasury considered ultra-long 50- and 100-year bonds but ruled them out based on a lack of demand. At the current rate of stimulus growth, federal debt as a percentage of gross domestic product (GDP) will soar past 200% much sooner than the 2050 date the chart below predicted. It was published in January 2020 — before COVID-19.

I think the problem that currency traders are having, and that is pushing down the value of the dollar, is whether the Fed, Congress and the Treasury will take back the stimulus, be it by lack of intention, lack of ability, or both. I’m not calling for a crash in the dollar by any means, but another 5%-10% decline in the DXY may put the rally on hold. This topic just isn’t getting any press or mention on financial media outlets, but it will if the dollar falters from here amid the cries for trillions of dollars of more stimulus. It is so easy for the government to spend and nearly impossible for it to save or reduce.

Until then, enjoy the ride, but keep a watchful eye on the dollar and bond yields. For now, a weaker dollar is good news for exports and the near-term growth that markets are clearly embracing. How much future debt can the market handle? I don’t know. No one knows, but Japan’s debt-to-GDP is about 279% (source: www.businessleader.com) and its stock market is at the same level today as it was in 2010.

The U.S. debt-to-GDP is about 111%, so it looks as if there is room for the market to extend its gains based on a variety of reasons outside of rapidly expanding debt levels. At the same time, getting to 200% of GDP in the United States at the rate of the current spending spree won’t take long and simply means we shouldn’t be surprised if one day, the market pays more attention to this trend than it cares to at present.

Shortest Recession on Record Gets the Bulls Running

recent: That was fast. Today we learned that U.S. employers found a will and a way in May to rehire 2.5 million people laid off during the COVID-19 pandemic. It’s no hyperbole to say that this is an incredibly good sign. The numbers are moving in the right direction even as the clock starts ticking on massive Congressional support funds. People with cash would rather do business than drift in a defensive position. We’re tired of sheltering in place. And it’s clear that if you give