Why Isn’t Tesla in the S&P 500?! Better to Invest in My Favorite Active Mutual Fund 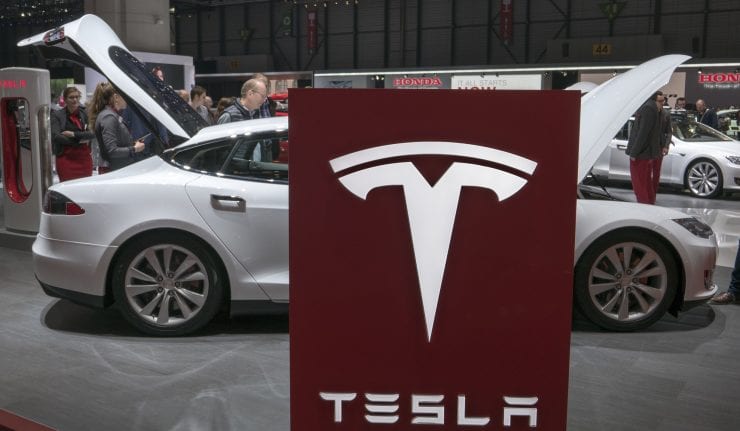 “You can’t beat an index fund if you are trying to beat the market at all times, and most people are trying to do that.” — Ron Baron

Ever since John Bogle, founder of the Vanguard Group of Funds, created the first index fund, investors have debated whether they should invest in a no-load, low-cost index fund like the S&P 500 or an actively managed mutual fund.

I invest in both, but my activist mutual fund has done better — a lot better. Here’s the story:

Over the years, supporters of the Efficient Market Hypothesis have argued in favor of index investing. They argue that it’s difficult, if not impossible, to beat the averages over time. Buying low and selling high is easier said than done. Moreover, activist traders face commissions, bid-ask spreads and taxes.

Academic studies largely support the indexing approach. Over two-thirds of money managers and mutual funds underperform the markets over any 10-year period. Activist fund managers can beat the market once in a while, but over long periods of time, they can’t keep up.

As Jesse Livermore says, “You can win a horse race, but you can’t beat the races.”

As a result, index investing has become more and more popular. Today, the Vanguard S&P 500 Index Fund and other index funds have over $1 trillion invested.

But is it possible for a disciplined money manager to beat the market fairly consistently? The answer is yes.

I thought about this topic when I was told last week that Tesla, the electric car company, is not in the S&P 500 Index, and won’t be until it demonstrates four quarters of profitability.

That’s the problem with the S&P 500. It doesn’t add a growth company like Tesla until it has proven itself profitable, and by then, the stock has skyrocketed. Tesla now has a market cap of over $400 billion, and it is up five-fold in 2020. The S&P Index never participated in this incredible run.

Moreover, Standard & Poors doesn’t drop stocks until they have fallen sharply in value. Thus, the famous index fund suffers from a double whammy. It adds, on average, 20 growth stocks a year and drops 20 poorly performing stocks a year.

In “Stocks for the Long Run,” Wharton Professor Jeremy Siegel found that if you have stayed invested in the original S&P 500 Index created in 1956, you would have outperformed the S&P 500 Index with less risk.

I wrote Princeton professor Burt Malkiel, author of “A Random Walk Down Wall Street,” about the fact that Tesla is not in the S&P 500. He said, “That’s why I recommend the Vanguard Total Index Fund.” But Tesla is such a small part of the total index fund that it mirrors the return of the S&P 500.

Ron Baron to the Rescue

Is there an alternative solution?

Yes! Invest with an activist money manager who has a consistent track record of beating the market. There aren’t many, but two of them are in my Forecasts & Strategies ideal portfolio.

Both funds are managed by billionaire Ron Baron, president and founder of the Baron Capital group of no-load mutual funds. I attend his annual Baron Investment Conference each year in Lincoln Center, New York (sadly canceled this year due to the lockdown). 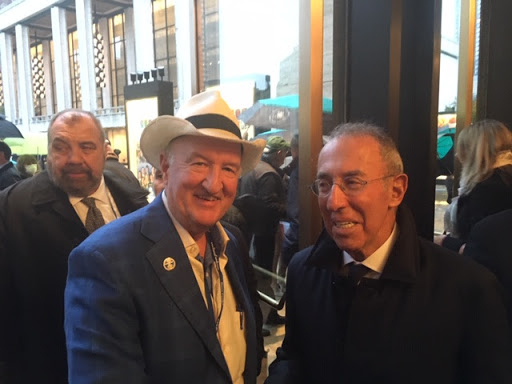 Your editor meets with Ron Baron at the Annual Baron Conference in New York.

Ron Baron isn’t your typical activist fund manager. He doesn’t buy and sell stocks and engage in a lot of turnover, which is costly. He’s actually a buy-and-hold investor, not unlike the S&P 500. He doesn’t try to time the market, although he will use bear markets to buy well-managed growth companies. His motto is, “I invest in people, not businesses.”

The difference is that he is selective in the stocks he buys. He focuses on high growth stocks like Tesla.

He explains: “The reason the stock-market index goes up 6% or 7% or 8% a year is business grows at that rate. But the reason we have done better than that, historically, is we have bought businesses that grow at closer to 15%.”

One caveat: If you decide to invest in a Baron fund, plan to stay invested, even during bear markets. If you sell, you won’t be welcome back. You have to be like Ron Baron, a long-term investor.

We’ve recommended investing in two of Baron’s funds in Forecasts & Strategies. Both have been big winners for my subscribers. In my own IRA, the Baron fund is my latest investment. To learn more, click here.

Who Caught the Big Fish?

“You have to be an optimist to catch a salmon!” — Johnny Bowles

Last week, my family and I took a week-long vacation traveling through California and Oregon, seeing the beautiful sights in Mammoth Lakes Resort… Lake Tahoe… and even stopping to see Reno, Nevada, “the Biggest Little City the World,” now with over half a million people!

Then we drove to Southern Oregon to see Crater Lake, one of the Seven Natural Wonders of The World. Later that day, we arrived in Portland, where I grew up. I drove by the block where the rioters/protestors meet every night. Half the city is boarded up and closed. It’s tragic to see what has happened to my hometown.

On a more positive note, we headed over to the Oregon coast, where I went salmon fishing with Captain Jim Green, a childhood friend (we grew up in Portland). He comes every year to FreedomFest.

Jim is a veteran fisherman and caught his salmon right away. I’m an amateur and have only been ocean fishing a couple of times. I waited another five hours without a nibble and was told that patience is the virtue all fishermen have to learn.

I was getting depressed when Johnny, our guide, told me that if you don’t think you will catch anything, you probably won’t. “Only positive thinking people catch a salmon out here,” he said.

So I switched my attitude and tried to be more optimistic about catching something, and, lo and behold, within five minutes, I caught mine.

Here are the photos showing our catch for the day. Both photos are real, but one is more accurate than the other. Question: Who caught the big fish (30-pounder)? 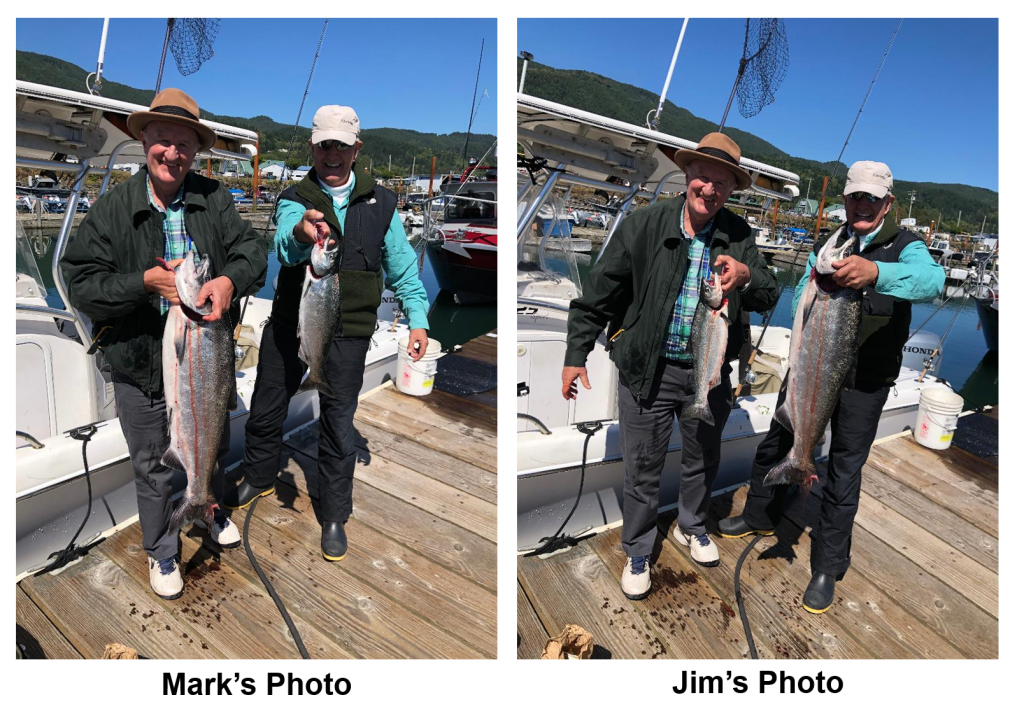 Tell me which of the two photos is accurate. Click here to submit your answer. 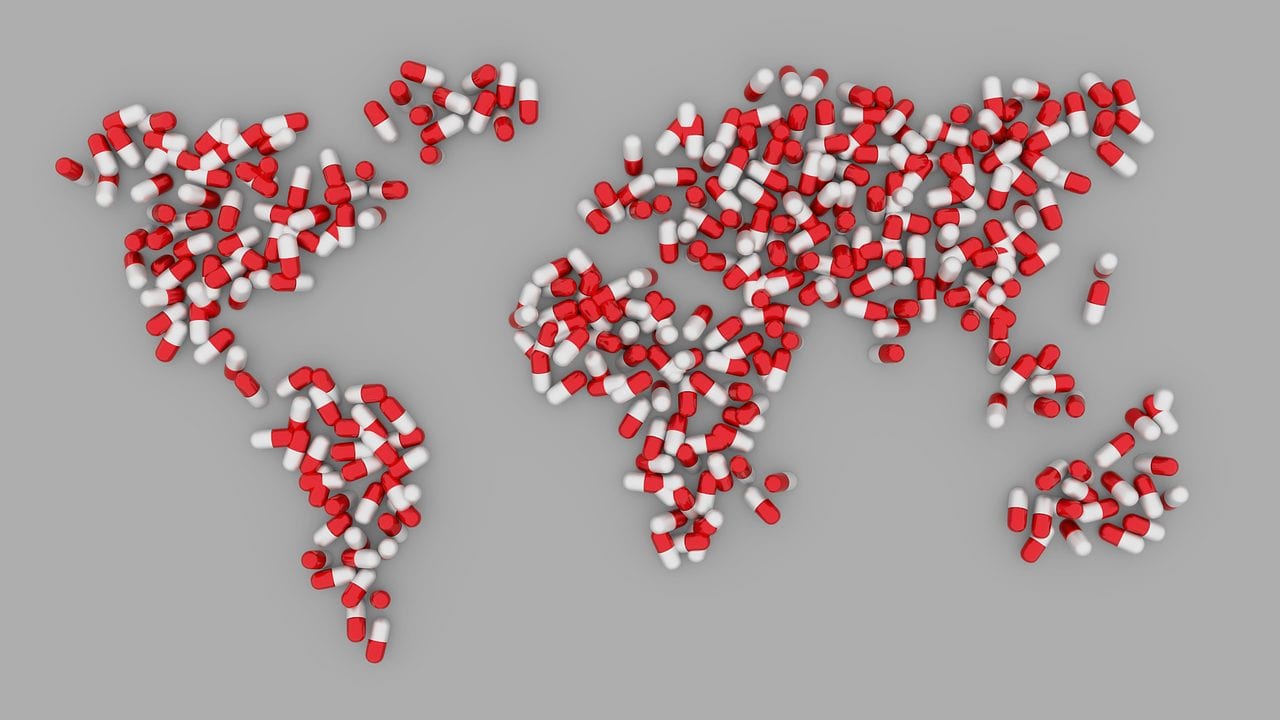 When it comes to figuring out a solution to the global pandemic that is COVID-19, our experts would be well served to listen to the wisdom of crowds. That’s especially true if the experts were privy to your pandemic solutions, with “your” being the nearly 300 respondents to last week’s survey on how best to deal with the coronavirus pandemic.  Recall that in

Exclusive  CANNABIS CORNER: A Good Year After All