Fed Taper Plan May Be on Hold

Expectations for a “once-and-for-all” announcement about the Fed’s timetable for its plan to taper quantitative easing (QE) are very high, going into this week’s symposium in Jackson Hole, Wyoming. This is an annual gathering of central bankers, economists and policymakers.

The lead up to Fed Chairman Powell’s 10:00 a.m. EDT speech this Friday has been nothing short of the Tournament of Roses Parade before the Rose Bowl. In light of many speeches by Fed governors in recent days, signaling that tapering is coming, the Fed hasn’t released many details about Chairman Powell’s speech, but it will come after the minutes from the July 28 Federal Open Market Committee (FOMC) meeting. This was when the U.S. central bank leaders have mentioned scaling back stimulus measures later this year.

However, there are growing signs that economic activity is slowing amid the persistent and stubborn Delta variant of COVID-19, making the Fed’s narrative more complicated. The data that the Fed were working off going into the July 28 meeting showed good momentum for businesses and consumers alike. Hence, the economic challenges now aren’t nearly what they were when the Fed introduced its plan to buy at least $80 billion of Treasuries and $40 billion of mortgage-backed securities every month.

But as of last week, the market is starting to reflect a growing concern regarding the prospect of a policy mistake in the making, if the Fed announces its intention to taper — on any timetable. 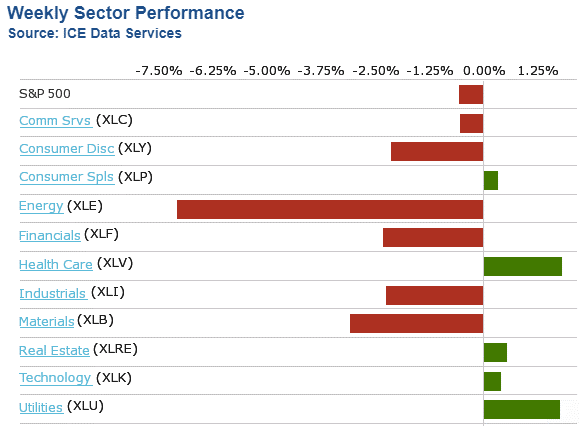 This past week saw cyclical sectors give back their hard-fought gains, with energy stocks leading the way lower. The Russell 2000, which is primarily made up of domestic companies, is sitting on its 200-day moving average (MA). It bears monitoring in that it tends to be a good indicator of sentiment about future growth prospects for the U.S. economy. The Russell 2000 is now down 10% from its March high, and a break of the 200-day moving average would be a notable event. 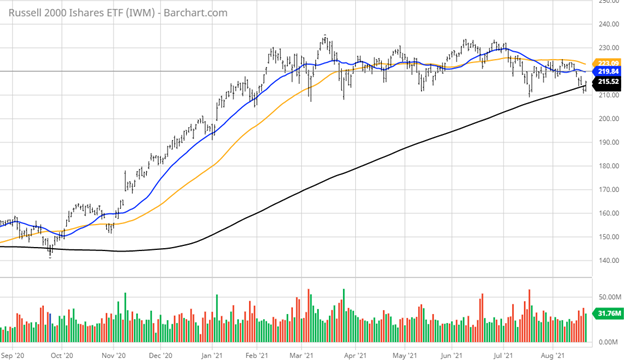 In fact, Goldman Sachs just lowered its third-quarter gross domestic product (GDP) forecast to 5.5% from 9.0%, citing the Delta variant leading to lower consumer spending and less inventory building in the third quarter. This rising level of investor concern is also tied to sales and earnings growth not living up to expectations for Q3, the efficacy of the current vaccines, China’s regulatory crackdown, further supply chain disruptions stoking more inflation, a more fragile geopolitical landscape and the growing prospect of the infrastructure bill not passing any time soon, due to political wrangling.

To be clear, much has changed since the Fed met in late July, where most of those voting members were in favor of tapering QE sometime this year. This messaging now puts the Fed in a bind, if its members decide to change their rhetoric and promote the indefinite extension of QE, then the risk of further fomenting inflationary pressures in a number of industries and services will become more prevalent, at least on paper.

The Fed doesn’t want to have to face becoming more aggressive in the future about raising rates if inflation defies the “transitory” path and pushes stubbornly higher, fueled by global supply chain bottlenecks and wage inflation, which are now real talking points among corporate chief financial officers (CFOs). Many companies are seeing margin pressure, rising salaries and increasing hourly wages.

Adding to the conundrum, the latest data from the Transportation Security Administration (TSA) showed a 10% drop in people moving through checkpoints, OpenTable’s data showed a decline in the amount of restaurant reservations and many live events have been canceled in both California and around the nation. Most airline, cruise line, hotel, casino, live event and restaurant stocks are in full retreat, with several knifing through their 200-day moving averages. This is representative of a consumer that is dialing it back, at least for now. 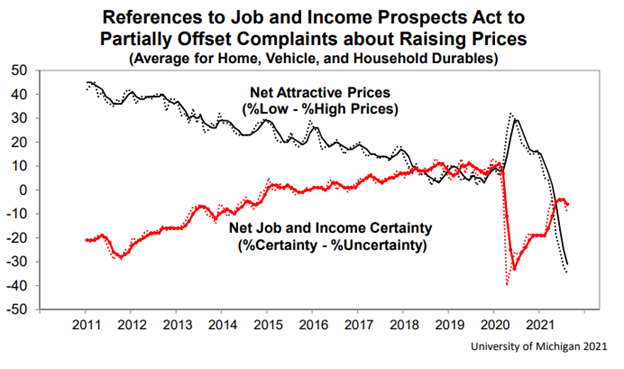 During the holiday season, with the labor ranks more fully employed, consumer spending will likely turn back up with gusto, but the short-term slowing in spending has triggered the market volatility that has characterized the month of August. In addition to the travel and leisure stocks, shares of the other reflation stocks in materials, metals, mining, industrial, transportation and financial companies have all pulled back, whereas stocks in tech (with earnings), utilities, health care, consumer staples and real estate investment trusts (REITs) are seeing big inflows and are trading at new all-time highs.

And even with Goldman Sachs cutting its GDP growth rate to 5%, that is still a solidly strong number for the economy and for the market to trade off of. Assuming the Delta variant does peak in the month ahead, as is being reported by Bloomberg, the Los Angeles Times and the Orlando Sentinel over the past few days, investor sentiment should turn back up for those beaten-down sectors. But for now, the Dow, S&P and the Nasdaq are trading at their highs, but with defensive issues doing the heavy lifting.

One early tea leaf for investors to ponder is that the symposium later this week will be done without a physical audience and will instead be held virtually. So, if the Fed wants to see that Russell 2000 chart produce the pristine double-bottom, higher-low technical formation that can launch the index to a new all-time high, then Chairman Jerome Powell has to thread the needle at Jackson Hole.