The Worst Month Starts off Strong

September is, at least historically speaking, the worst month of the year for the stock market. This year, however, stocks have shaken off the immediate uncertainty generated by a potential U.S. military involvement in the Syrian civil war, as well as the pending uncertainty about the Fed’s decision on “tapering,” and the result has been a nice start for the bulls.

In fact, the S&P 500 has been up six days in a row. If the market closes higher today, it will mark seven straight days of gains. The benchmark measure of domestic stocks also will have been up eight of the last nine days, if we close higher on Wednesday (the S&P was up about 4 points midway through Wednesday’s trade).

After President Obama’s address to the nation last night on the Syrian situation, the markets are basically betting the issue is at least temporarily resolved. And while we still could see some pressure on stocks if the situation heats up again, for now the issue is off of the front burner.

Of course, the biggest unknown facing the markets right now is the Fed and its pending decision on monetary policy when it meets on Sept. 18. Most Fed watchers, including me, think there will be some type of tapering announced after the Federal Open Market Committee (FOMC) meeting concludes on Sept. 18. The real unknowns, however, are over what the specifics of tapering will be, as well as the timing of the taper.

As for specifics, what the market fears most is a lack of clarity about how the tapering process will unfold. The hope here is that if the Fed does indeed taper as expected, then Chairman Ben Bernanke will use the press conference held after the FOMC announcement to provide specific details on the pace of tapering, the type of tapering and the amount of tapering.

Once the news is out on what the Fed is actually going to do, we should get a lot more stability in both the equity and bond markets, and that should give us a much clearer sense of where things will go from there. 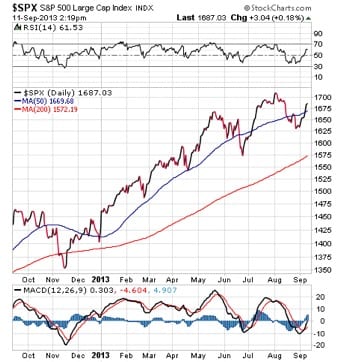 The other Fed-related unknown confronting the market is who will take over the reins as Fed chairman after Ben Bernanke retires. For a long time, it was sort of assumed that Fed Vice Chairman Janet Yellen was a shoe in for the top slot. Now, however, the smart money has former Treasury Secretary and current presidential adviser Larry Summers as the leading and most-likely candidate.

There are some concerns with the Fed’s succession on Wall Street, as Yellen is viewed as the clear choice from a smooth post-Bernanke transition. Summers definitely is more of a wild card. As such, Wall Street is a bit more nervous about him becoming the world’s most-powerful central banker.

To find out what sectors I’m watching right now, and more importantly, to find out when to buy those sectors, I invite you to check out my Successful Investing advisory service today.

Interest rates are on the move, we all know that. But how high will rates go? One prominent bond investor thinks yields are headed higher, and that this scenario does not bode well for the economy.

This prognosis comes to us from Jeffrey Gundlach, CEO of DoubleLine Capital and manager of several of the best-performing bond mutual funds available today. In fact, I currently recommend some of Mr. Gundlach’s funds in both my advisory service and my money management firm, so that tells you how much I respect his opinion. 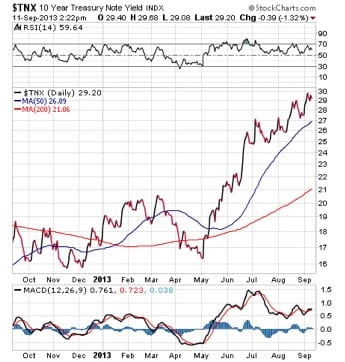 In a recent conference call titled, “What If,” Gundlach outlined a host of scenarios including what happens if the Fed tapers to what happens if we go to war in Syria. He also talked about what could happen if emerging markets continue to languish.
Perhaps the most interesting what if was Gundlach’s prediction on interest rates. He suspects the yield on the benchmark 10-year Treasury note is headed to 3.1%. That move, Gundlach warned, won’t be good for stocks.

It was 12 years ago today that the world changed forever.

The horrific attacks perpetrated on our country on September 11, 2001, shattered our sense of personal safety. In market terms, we also saw the first major shock event of the new millennium.

Since that day, we have suffered through a credit bubble, the Great Recession and a European debt crisis — all shocks of a different sort to the financial system. I suspect that in the next dozen years, the market will suffer more shock events, but nobody knows what those events will be, or how well we will be able to deal with them.

The only thing you can do to safeguard your money and your family is to make sure you always approach the market with an eye toward safety first. That means positioning your money to take advantage of the upside in markets, but also making sure your wealth isn’t overexposed to risk.

It may sound simple, but the lesson of 9/11 is that shock events can and will happen, and how you prepare for those events is the key to prevailing.

Madison on Tyranny and Oppression

“If tyranny and oppression come to this land, it will be in the guise of fighting a foreign enemy.”

I think it’s important, especially today, to remember Madison’s warning. Whatever battles we fight around the globe, we cannot let those battles destroy our freedom.

share on:
Exclusive  My Five Favorite Quotes to Live By