The Fed is out of Control

“The establishment of Central Banking removes the checks of bank credit expansion, and puts the inflationary engine into operation.”
— Murray N. Rothbard, “What Has Government Done to Our Money?”

Last Monday morning’s Yahoo Finance headline was most appropriate: “Markets Rise on Summers’s Decision; Free Alcohol in Stores.” The announcement had reference to Larry Summers’s decision to withdraw his name as the frontrunner to be the next Fed chairman. The free alcohol refers to Urban Outfitters announcing free champagne for customers at some of its high-end stores.

But the free alcohol could also refer to Summers, who threatened to withdraw the punch bowl of easy money if he were Fed chairman. Summers is an advocate of restraint who argues that the Fed should end its quantitative-easing (QE) plans. 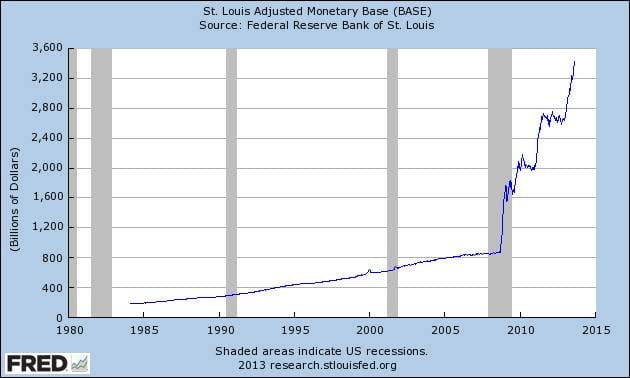 Yesterday’s statement by Ben Bernanke and the Federal Reserve is clear: the U.S. government is determined to do whatever it takes to get price inflation going again, even if it means threatening to create more asset bubbles. Monetary expansion pumps up the value of stocks, bonds, gold and real estate — all investment assets — but the artificial stimulus cannot last and will create dangerous structural imbalances in the economy. (For more on why inflation is inherently unstable, see my latest book, “A Viennese Waltz Down Wall Street: Austrian Economics for Investors.” You can buy the book for $20, plus $4 for shipping and handling, from Eagle Publishing, 1-800/211-7661. For further details about the book, click here.)

President Obama is now expected to name Fed Vice Chair Janet Yellen to be the next Fed chairman. She is an unabashed inflationist and wife of George Akerlof, a Keynesian economist who despises Milton Friedman’s monetarism.

No matter who is the next Fed chairman, the monetary authorities are doing their part to cover up the increasing tax and regulatory burden of the federal government. Despite all of their heavy lifting, the economy is still struggling, with a lackluster labor market and slow growth in capital and consumer spending.

The new money is going primarily into speculative assets such as real estate (the price of condos in Southern California is up 40% in four months) and Wall Street (stocks are up 20% this year). Our own portfolio in the Forecasts & Strategies investment newsletter is moving forward, with 16 out of 19 positions now profitable.

You Blew It! Too Many Blasted Rebates and Retail Cards

I went into Staples, the giant office supply store, to buy a ream of paper earlier this month and ended up with a shock. The price tag showed $3.99, but when I got to the counter, the price was actually $7.99. “I thought the price was $3.99,” I said to the clerk.

Rebate? Are you kidding? It turns out that Staples had its own $4 rebate on its paper products. I had to go through the cumbersome process of filling out another form to get a check in the mail for a lousy $4.

What a waste! I can barely see manufacturers justifying the $50-$100 rebate on computers and appliances, but for a ream of paper? Give me a break.

I didn’t bother and threw the rebate form into the trash. Of course, that’s what Staples is counting on — to advertise its paper for $3.99, and get most customers to end up paying $7.99. Talk about a rip off and another example of the tarnished image of business these days.

It seems that Madison Avenue has taken over business recently, where marketing departments and newly minted MBA graduates are urging retailers to offer their own discount cards, reward cards or those never-ending surveys at the end of a telephone call or via email (“tell us how your recent airline flight was…”). I’m sick of it!

Every retail company now has a discount or reward card, and I’m constantly asked if I have their reward card when I buy something at the grocery store, the pharmacy or the office supply company.

When I say “no, I don’t have your stupid card,” the clerk invariably asks, “Would like you like one?” To that query I respond, “Are you kidding? I have way too many cards as it is. Why don’t you just give us a price break instead of all this reward card nonsense? Enough is enough!”

To that response, the clerk always gives me a blank stare.

O Super “Southeast Asia/China/Japan” cruise, April 2-15, DIAMOND PRINCESS: Join top financial speakers (TBA), my wife and me on the Asian cruise of a lifetime aboard a new five-star Diamond Princess cruise (see map for all the stops). 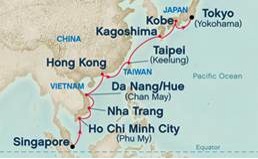