This week’s market action has been dominated by — you guessed it — the political showdown in Washington and the government shutdown. Wednesday marks day two of the partial federal shutdown. As of this writing, both Democrat and Republican leaders are vowing not to budge in the battle to come to terms on a stop-gap measure to keep the government fully funded.

Now, while I suspect this political theater will come to an end relatively soon, nobody knows just when the situation will be resolved, hence the uncertainty and selling we’re seeing in stocks right now. Moreover, the fight over the budget will soon take a backseat to the real pending fight over the much more significant issue of the debt ceiling. This is a battle that, I suspect, will negatively influence markets going forward, and that is something all investors must be prepared to tackle. 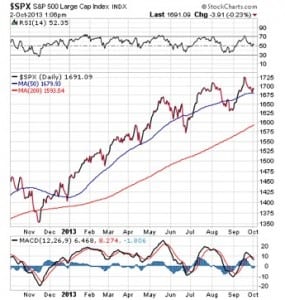 The silver lining here is that every time during the past several years that the politicians in Washington engaged in a battle royal over big-budget issues, the result was a significant decline in stocks (the original health-care fight, the debt-ceiling crisis in the summer of 2011 and the election and fiscal cliff in late 2012 and 2013).

However, that decline also led to a big surge higher in stocks once the issues were worked out.

I suspect we could see this same kind of bust-to-boom passion play acted out this time, and that would set us up for a huge buying opportunity and big gains as the year comes to a close.

For now, there is no need to tempt fate by pouring your investment capital into a politically touchy market. There will be plenty of time to go long in this market when the political seas calm. When they do, that will be the time to set sail — but not until then.

“I didn’t aim at anything except good music.”

He is perhaps the best country singer ever, and one reason why is because he always put the quality of his music first. Waylon’s success is an example of what can happen when you aim at doing something well. In fact, in any pursuit in life, doing something well and aiming at quality is the first step on the path to true success.