The U.S. economy is slowing but thus far is avoiding a recession, according to the latest data from the Bureau of Economic Analysis.

Gross Output, a broadened measure of U.S. economic activity published by the bureau, grew “much more slowly” in the fourth quarter of 2014 than the previous quarter or the same one a year ago, said Mark Skousen, PhD, a proponent of the new statistic and the editor of the Forecasts & Strategies investment newsletter.
Real Gross Output (GO) advanced at an annualized rate of only 2.6% to $31.4 trillion by the end of 2014, half the rate of the 5.2% jump in the third quarter of 2014.

GO is a measure of sales or receipts of all industries throughout the production process, including business-to-business transactions (B2B). As a result, GO provides a fuller perspective of the performance of the broad U.S. economy, in contrast to Gross Domestic Product (GDP), which omits most B2B growth. 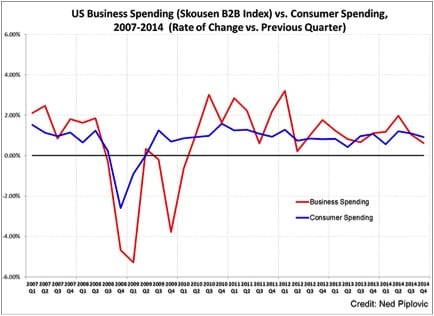 Since the financial crisis of 2008-09, GO has risen faster than GDP. The trend continued the fourth quarter of 2014, with GO rising at a slightly faster rate than GDP.

Indeed, GDP, which only measures the value of final goods and services, climbed 2.2% in real terms to $17.7 trillion in the fourth quarter of 2014, compared to 2.5% for GO during the same quarter. GO’s superior growth compared to GDP indicates that an economic recovery remains in place and a recession is unlikely, Skousen explained.

However, B2B activity definitely slowed in early 2015. According to the new Skousen B2B Index, business spending increased at a lower annualized rate of 2.5% in fourth-quarter 2014, compared to third-quarter 2014, as the following chart shows. 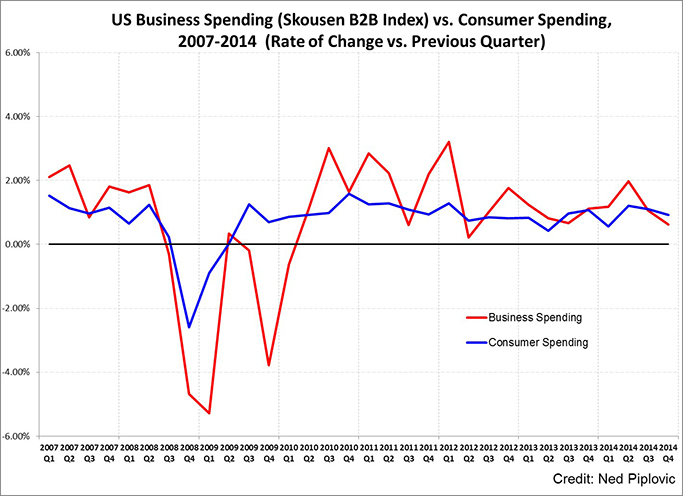 “The GO data and my own B2B Index demonstrate that total U.S. economic activity has slowed significantly, but not enough to cause an actual recession,” said Skousen, a presidential fellow at Chapman University in Orange, California. “B2B spending is, in fact, a pretty good indicator of where the economy is headed, since it measures spending in the entire supply chain.”

GO is a more comprehensive measure of economic activity than GDP, which leaves out a “big part of the economy,” especially business-to-business transactions in the production of intermediate inputs, Skousen explained.

“GO includes most B2B activity that is vital to the production process,” Skousen said.

Skousen introduced Gross Output as a macroeconomic tool in his work The Structure of Production (New York University Press, 1990, new third edition scheduled for July 2015). The Bureau of Economic Analysis publishes GO on a quarterly basis in its “GDP by Industry” data. It is the first aggregate statistic to be published on a quarterly basis since GDP was introduced in the 1940s.

“Gross Output and GDP are complementary aspects of the economy, but GO does a better job of measuring total economic activity and demonstrates that business spending is more significant than consumer spending,” Skousen explained. “By using GO data, we see that consumer spending is actually less than 40% of economic activity, not the 70% figure that is [commonly] reported by the media.”
The Skousen B2B Index showed total business spending throughout the production process reached $23.0 trillion in the fourth quarter 2014, compared to personal consumption expenditures of $12.1 trillion.

“Thus, we see that business spending is almost twice the size of consumer spending in the U.S. economy,” Skousen said.

The Wall Street Journal and Forbes magazine are among the media organizations that have highlighted Skousen’s economic views about GO and his other favored economic statistics.

Media interest in GO, the Skousen B2B Index and their relationship to GDP have grown to the point that Skousen said he hired a part-time media relations person, Valerie Durham, 1-410-570-0535 and vdurham@skousenpub.com, to field queries for him. He also can be reached directly at mskousen@chapman.edu.

What has Contributed to the Falling Deficit