When it comes to how investors feel about the current market, I think a line from a song by the great rock and roll band Led Zeppelin says it best:

“I’ve been dazed and confused for so long, it’s not true…”

In fact, dazed and confused is perhaps the best description I can offer here regarding investor sentiment, because that’s precisely the mood I’ve picked up on here at the Las Vegas Money Show.

This year more than any other in the past, including the über-confusing 2009, I get the sense from attendees that they don’t know what to make of this market. Hey, I can sympathize with this sentiment, as making sense of all the craziness in the market and on the global economic stage has been an extremely difficult task for even the most seasoned market observers.

I’ve been in this business over three decades, and I can’t recall a time where so many exogenous events, and so much political and economic risk, put into question the future of the equity markets.

Some of the many questions I fielded from Money Show attendees concerned the ongoing drama in Europe. The entire continent is on the precipice of recession, and countries such as Greece, Spain, Portugal, and even France, either are, or will soon be, in recession. Elections in Greece and France have kicked up more uncertain dust, and now we don’t know what the outcome will be regarding the European Union-negotiated bailout package.

My recommendation to investors over this European-induced uncertainty is to stay away from both European equities, and especially stay away from riskier emerging markets. The climate in both is not conducive to a long position here, either on the fundamental front, the technical front or the political front.

As you can see by the chart here of the iShares MSCI Emerging Markets (EEM), this segment has fallen off the proverbial cliff of late, and the fund now trades well below its long-term, 200-day moving average. 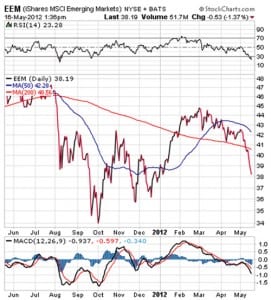 Part of the selling in emerging markets is due to the recent batch of downbeat economic news out of China. Last week, we received data showing that the growth in Chinese imports was basically flat for April compared with the prior year. China’s exports also grew half as fast as expected in April, according to figures released by the National Bureau of Statistics in Beijing.

The weakness in China’s economy prompted the country’s central bank to reduce the so-called reserve requirement ratio by another half a percentage point, the third such move in just the last six months. To me, this is a clear sign that China is still having big growth issues. It’s also a sign that the once-revving engine of the global economy is practically running on fumes.

Here in the United States, we face our own disturbing set of unknowns. Can American companies continue to do well if the rest of the global economy slows precipitously? Also, which political party is going to take control of the presidency and Congress in November? The unknown of what appears to be a very tight presidential race is bound to keep investors in the “uncertainty” camp throughout the summer. 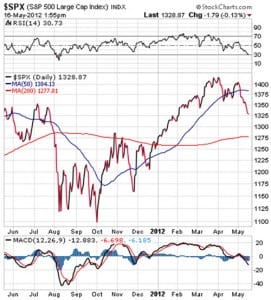 The more long-term concern, and the real cause for alarm and confusion going forward, is our country’s fiscal mess. How long can we continue living on borrowed money, and how long can we muddle through with sub-2% GDP growth and 8% unemployment before things either get worse, or collapse?

Yes, these are times to be justifiably dazed and confused, so if you feel this way, you’re not alone.

The best advice I can offer here is that you need to stay extremely defensive with your money. There is no need to subject your capital to risk here until we get a clearer picture on some of the multiple unknowns facing the market. When the coast clears up, the buying opportunities will be in clear view. However, only those who stay defensive and preserve capital now will be in position to take full advantage of those opportunities later.

“Fast is fine, but accuracy is everything.”

Being quick on the draw surely helped the gunfighters of the Old West survive; however, being able to shoot on target was perhaps more important. The same is true when it comes to investing. Making fast decisions with your money is fine, but being accurate in your decision is everything. The moral of this story is to not be too concerned with getting in the market quickly. It’s definitely more important to buy the right stocks, bonds, ETFs, etc., than it is to rush in headlong for the sake of a speedy decision.

As Americans continue to age and to live longer lives, what could offer a more stable investment than healthcare? The Vanguard Health Care ETF (VHT), in particular, provides just such an investment opportunity. Healthcare historically has remained a stable investment, but now that the baby-boomer generation is starting to retire, the healthcare sector is poised to make significant gains. Indeed, VHT has been on the rise, opening the year at $61.93 and closing at $65.97 on May 15