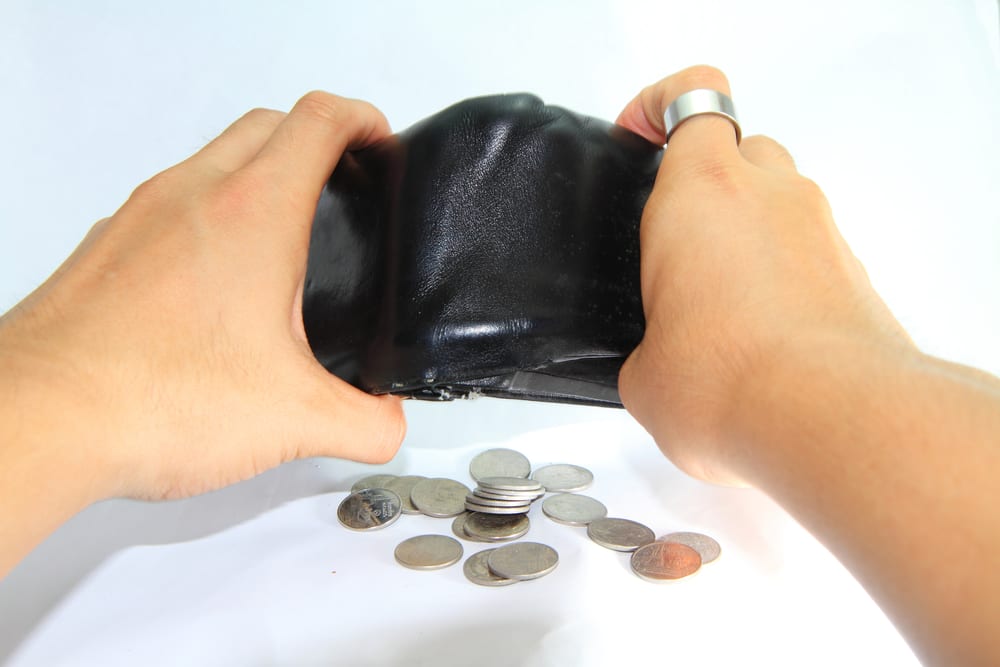 Last Thursday night, Fed Chair Yellen and former Fed Chairs Ben Bernanke, Alan Greenspan and Paul Volcker took part in a panel titled, “When the Federal Reserve Speaks… the World Listens.” Fed Chair Yellen said that some slack remains in the U.S. labor market. She said that the Federal Open Market Committee (FOMC) is not trying to overshoot its inflation target of 2% but that 2% is a goal and not a ceiling. As of Friday, Fed fund futures are showing just a 51% chance of another 25-basis-point rate hike by the end of the December FOMC meeting, according to the CME website.

Kansas City Fed President Esther George (a FOMC voter) recently said that continued extreme monetary accommodation risks financial instability. She said that “currently, commercial real estate markets, where prices have continued to drift higher, bear watching.” George was the lone voter in favor of a rate hike at the March FOMC meeting. On Friday, remarks from New York Fed President and FOMC voter William Dudley struck a dovish tone as he cited the need for a gradual path towards interest rate normalization amid risks to inflation and the growth outlook. The comments bore a striking resemblance to recent commentary from Fed Chair Yellen. Aside from this notation about commercial real estate, nothing out of line within their recent remarks made headlines, and they made for a chorus of fiscal doves singing in harmony.

What is making headlines is ratings agency Standard & Poor’s, which reported that the global corporate default rate has hit a seven-year high as energy and mining companies suffer from very poor trading environments. In another cautious note, Moody’s Analytics last Friday issued a consensus forecast for Q1 GDP growth of just +0.6%, adjusted lower by -0.3% from the prior consensus estimate of +0.9%. As such, bond yields are trading near their recent lows with the following table of the U.S. 10-year paying out comfortably higher interest than its European counterparts with the exception of Portugal and Greece.

Even with the strong rally of 7% gains for March, the S&P 500 is trading only 10 points higher than where it began the year, at 2,038. The “washing machine” market continues to confound income investors that are weighted outside the safety of utilities, telecom providers and real estate investment trusts (REITs) that are tied to neighborhood retail properties, data center REITs, self-storage REITs and consumer staples where gains of between 10%-25% have been realized. Without question, there has been a strong oversold rally in the junk bond market, but here too, like the S&P 500, that market is just back to the flat line for the year.

Negative interest rates and falling rates in general are weighing heavy on the financial sectors both here and abroad. In the past week, European banks led to a tumble in the heavyweight financial sector as money center banks, investment brokerages, asset management companies and life insurance names all traded lower in sympathy. The U.S. financial sector isn’t faring much better, down 4.7% year-to-date, per the chart of the Financial Select Sector SPDR ETF (XLF), the most widely traded basket of financials. 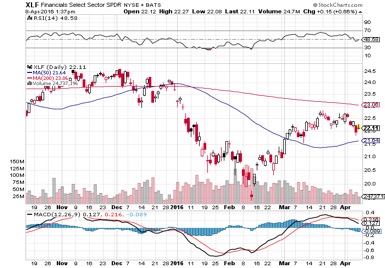 The dovish rhetoric by Yellen and her fellow U.S. central bankers has the U.S. Dollar Index (DXY) testing a key support level at $94.00. If that support level is violated, the index would slip into what currency traders call “open water.” The short-term 20- and 50-day moving averages are crossing down through the 200-day moving average that will most certainly invite a short-seller’s raid on the dollar if the $94 level is breached. A break would not only benefit short-sellers, but U.S. multi-nationals that derive more than 50% of revenues outside the United States. I find this to be a bright spot for maintaining the basis for a further recovery in equities led by dividend-paying stocks. 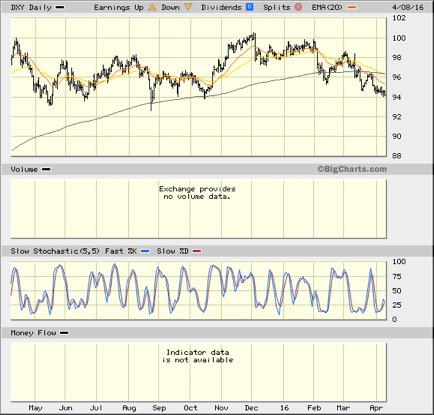 The big story for the coming week is the oil producers’ summit in Qatar on Sunday, April 17. With prices ticking back higher in anticipation of an agreed upon production freeze, there is a lot of room for extreme volatility when the markets re-open the following Monday. Shares of the big integrated oil companies would be the best way for investors to consider raising exposure to the sector.

Both Royal Dutch Shell PLC (RDS.A) and BP PLC (BP) are paying out dividend yields in excess of 7.5%. Current earnings per share do not cover the payouts. However, if there is a deal in Doha, the market will assume a future recovery in earnings power lowering the risk of any dividend cuts. That perception will, in my view, lead to higher share prices at least over the near term. It makes me wonder whether a year from now income investors will be asking themselves — “Do you remember when Royal Dutch and BP were paying over 7.5%?” That’s what makes markets.

In case you missed it, I encourage you to read my e-letter column from last week about the energy and manufacturing outlook for markets. I also invite you to comment in the space provided below.