These Three Sectors Suffered 85% of the Pandemic Pain 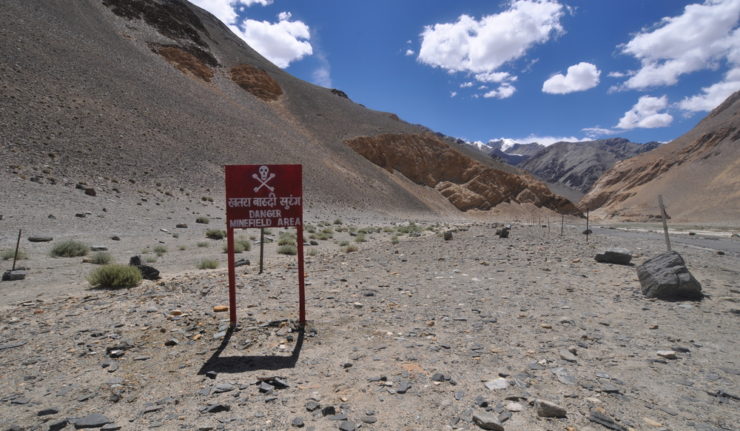 Across the United States, millions of families make it a practice to sit down at the kitchen table and draw up the monthly budget. For the great majority of folks, upon tabulating the income versus expenses, there is an ever-dwindling amount of discretionary income left to pick up a few extra items at the mall, spend on dining out, take that trip on the bucket list or pay for entertainment. Despite the panorama of global deflationary pressures that have central bankers staying up at night the great oxymoron that permeates the economic landscape is that there is widespread feeling from consumers that it’s getting more difficult to keep up with the cost of living. In a world where negative interest rates are not some remote idea anymore, income investors, and especially retirees, are fully aware there is a yield crisis in the markets.

My view on this topic is derived mostly from anecdotal evidence. However, I talk with retirees everyday and when the subject of household inflation comes up, it is an almost universal opinion that it costs more to do just about everything these days except for going to the pump to fill up. The costs of housing, health care, home services, medical premiums, prescription drugs, public transportation, education, travel, vet bills, auto repairs, sports venues and just going to the movies are all going up. Sure, one can get deals online to buy stuff, but I’m talking about the paying for the essentials of daily life, non-discretionary items and services. Some places are seeing radical inflation in certain line items. The Bay Area’s largest water district, the San Francisco PUC, announced last month that it plans to increase rates 32% this year on the 26 cities and private companies it delivers water to along the Peninsula, the South Bay and southern Alameda County.

This past week, Treasury yields gave up a bit of ground. The 10-year Treasury Note yield ended up at 1.85% in deference to the U.S. stock market’s optimism about the prospect of better economic growth for the second half of the year, with continued notable capital rotation into economically sensitive sectors. However, that optimism might get tempered as Microsoft, Starbucks, Visa and Google all missed first quarter Wall Street expectations, with each respective stock taking a step back as forward guidance also was more guarded than the Street was expecting. When the growth darlings come in light of forecast, there will be a natural move to the middle for investor sentiment.

Leading up to last week’s round of high-profile earnings releases, money was starting to rotate out of the super-safe dividend sectors with the idea that cyclical growth is getting back in fashion with institutional investors. That notion, though still somewhat intact, ran into some changed hearts and minds, opting to roll right back into the utilities, consumer staples, telecom service providers and specialty real estate investment trusts (REITs). It was as if a voice from the defensive sectors of the market was heard saying, “not so fast.” And I agree. Most of the data crossing the tape in the past week has been soft. Housing Starts, Building Permits, Philly Fed and Leading Indicators all came in light of consensus forecast.

Mark Hulbert, a senior columnist at MarketWatch, reported on April 1 that bond bullishness is at a record high, going back to the 1980s when Hulbert started monitoring the investment newsletter industry. This comes as the stock market has risen roughly 12% off the Feb. 11 lows and makes one wonder what’s driving so much bullishness. 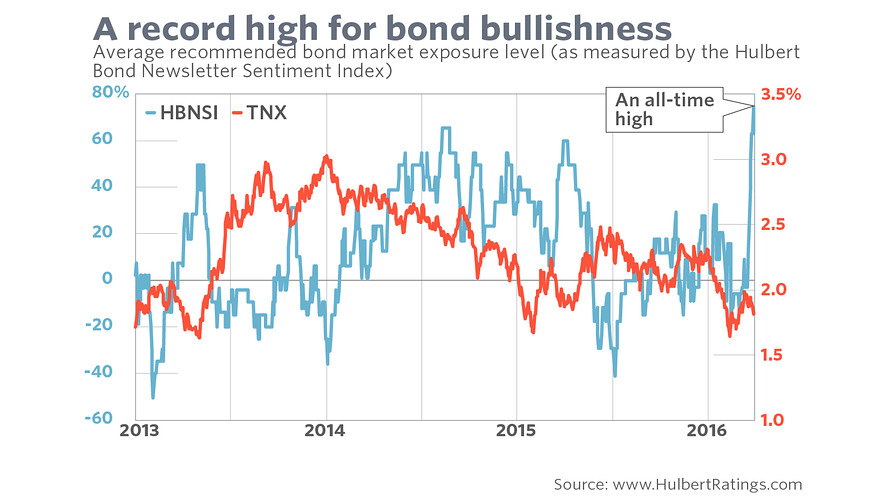 Contrarians will claim this is the stuff of market tops, but then again, with no less than six developed nations and regions around the globe implementing negative interest rates, it might not seem so much of a conundrum. Hulbert points out in his analysis that this spike in bond sentiment is more of an exception than the rule. The chart above shows a historic inflection point when bond prices peak and yields begin to creep higher. I can’t say if past is prologue, but when some of America’s very best blue-chip growth companies don’t make their numbers, then maybe the guys in the bond trading pits have better information that the guys on the floor of the NYSE.

In case you missed it, I encourage you to read my e-letter column from last week about how to handle the two-headed monster of low yields and high taxes. I also invite you to comment in the space provided below my commentary.

It was a mixed week for U.S. stock markets, with the Dow Jones up 0.59%, the S&P 500 gaining 0.52% and the NASDAQ down 0.65%. The MCSI Emerging Markets Index ended the week essentially flat. Big gainers in your Bull Market Alert portfolio included United States Oil (USO), which rose 4.98%, and Sociedad Química y Minera de Chile S.A. (SQM), which moved up 4.68% for its first week in the portfolio, and also hit a new 52-week high. After the worst s