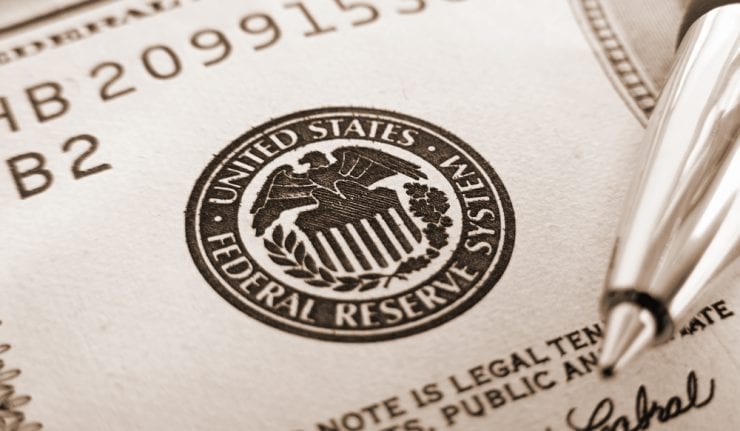 President Trump quickly is walking back and dialing down on most of the populist issues that won him the election while playing chicken with Syria and North Korea, without any sort of key coalition building. For a guy who ran as a nationalist, he sure is looking more like a global “Lone Ranger” every day.

The flip-flopping on domestic issues and the rattling of sabers means investors are having to recalculate rapidly how much of the market’s current condition to price in these unforeseen elements of newfound risks. What’s the new time line for health care reform, tax reform, infrastructure spending and deregulation? The only thing the market is sure of is the current spending resolution expires on April 28, after the U.S. government reinstated its so-called “debt ceiling” in March. Do not worry, though, in the short term. It is complicated to explain in a short column, but the government will be able to continue to operate pretty much as usual until sometime this fall.

And the Treasury Department has been funding the government using so-called “extraordinary measures” that don’t officially add to the national debt, at least not yet. Treasury officials can continue to pay the government’s bills in this manner until sometime this fall. So, it’s likely to be business as usual until sometime in late October, unless the Republicans somehow get serious about drafting a new federal budget before then.

Aside from the daily policy changes at the White House and the government’s funny money approach to paying its bills, the U.S. economy continues on a path of steady recovery, albeit with a couple of notable misses. The March employment situation showed that the U.S. economy added only 98,000 nonfarm payrolls that month, missing the consensus for 180,000. The unemployment rate fell to 4.5%, however, well below the consensus forecast of 4.7% and the lowest seen since the financial crisis. Average hourly earnings grew by 0.2% month over month (2.7% year over year), suggesting that wage pressures remain contained.

The Labor Department also revised down its estimates for job creation in January and February, with the combined total falling by 38,000. Average hourly earnings rose at an annual pace of 2.7% in March, following a 2.8% increase in February. The retail sector suffered the most in March, with almost 30,000 jobs cut. Big box department stores are expected to close at least 3,500 stores this year alone. It remains to be seen if the much-weaker-than-expected March jobs report was an aberration or a sign of things to come.

The ISM Services Index fell to 55.2 for March (57.6 prior), missing the consensus of 57.0. The index is probably the most important activity survey on the calendar, given that the service sector accounts for two-thirds of U.S. output. The notion of another weak jobs report, flagging retail sales and a delay in just about every item on Trump’s to-do list could, in my view, easily could sway the Fed to delay raising short-term rates at the June Federal Open Market Committee (FOMC) meeting.

If the bond market is any predictor of what lies ahead, it would suggest the nervous and cautious tone brought about by recent events is not just geopolitics, but some legitimate apprehension as to what the domestic economic output will look like without all the stimulus promises from the “Trump trade.” The yield on the 10-year Treasury plumbed a fresh five-month low last Friday after Trump talked down the dollar and interest rates while at the same time, in an apparent reversal, said Federal Reserve Chair Janet Yellen was “not toast” in leading the central bank when her term ends next year. 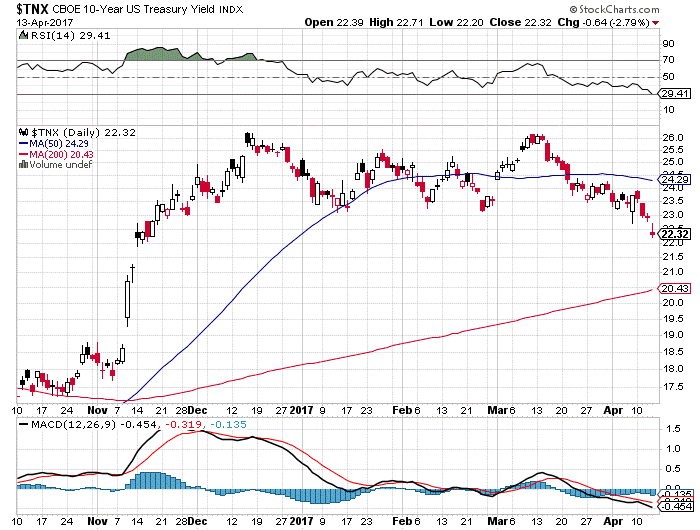 Business Spending to the Rescue

Since we’re in season one of the White House reality show, we can take what comes at us at face value, since there is little in the way of a pattern of progress at work. With that said, just when the market is teetering on the verge of a breakdown in confidence, earnings season is about to bloom and the latest independent read on key business spending is nothing short of being resoundingly bullish for the economy and for stocks. In last week’s release, ChangeWave Research’s latest corporate survey showed major improvements in U.S. business IT spending going forward. Planned second-quarter spending is the strongest since 2010.

As the following chart shows, business spending is up a net 9 points, building upon the 4-point improvement from last quarter. The latest findings represent the best IT spending growth rate in five years. This is like the cavalry showing up at the end of a good spaghetti western.

When business spending is trending up, there is a wide and deep impact on the broader economy that historically results in positive gross domestic product (GDP) growth, positive jobs data and positive consumer spending, all of which are soft in the first quarter. Despite the many domestic and geopolitical issues that beset Trump, Congress and the rest of the world, there is harmony between a strengthening IT sector for the U.S. economy and stock market performance.

To that end, bond yields likely will stay low across the entire curve. Indeed, Q1 corporate profits for the S&P likely will come in at or near a record level. Blue chip dividend growth stocks and high-yield assets should have a banner second quarter and another solid year of total returns. Find out how to position a portfolio for maximum income and total return at Cash Machine. Just click here and learn about how to manage a clear path in uncertain times with the help from a pro with more than 34 years of Wall Street experience.

In case you missed it, I encourage you to read my e-letter from last week about how the Fed’s actions have created uncertainty for the stock markets.

With most U.S. investors focused on the Trump rally, almost all of them have missed out on a strong stock market rally in China. With domestic Chinese A-shares up 8.32% this year, the Chinese stock market has returned about twice the gains of the S&P 500. This week’s Momentum Trader Alert recommendation shifts our attention to a Chinese Internet play that popped up on our momentum screens as a top performer. Headquartered in Beijing, China, Momo Inc. (MOMO) prov