Mastercard Charges ahead Despite Tariffs 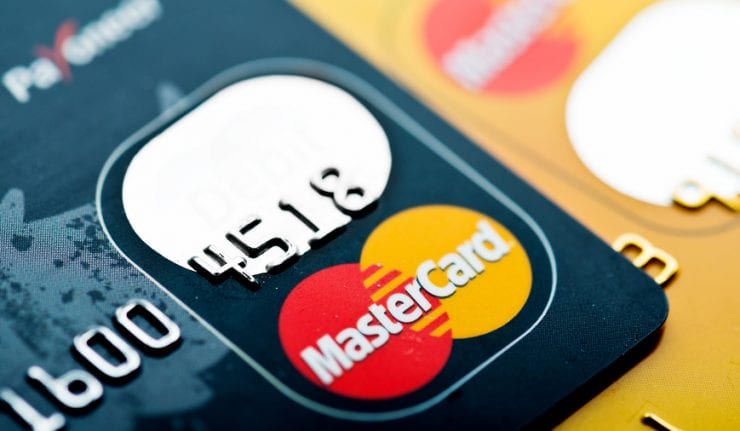 Mastercard Inc. (NYSE: MA) is a global payment company that is positioned to surmount tariffs and outperform the market by providing services to support credit, debit and related electronic payment programs for nearly 25,000 financial institutions.

The company has achieved a 65.22 percent return during the past 12 months and still is climbing. Mastercard also has jumped 33.23 percent since the start of 2018 and 18.11 percent during the past three months, significantly beating the performance of the credit card services sector and trouncing the overall market rise during those time periods.

Jim Woods, a market veteran who writes the Intelligence Report newsletter, currently is recommending Mastercard, which he described to me as an investment on the “clicks versus bricks” competition now taking place in the retail sector.

“What this means is that consumers are still spending money; they’re just spending money online and not as much in physical stores,” Woods explained. “And, what do you need when you purchase anything online? That’s right, an electronic payment via the likes of Mastercard. It is this wave that the credit card issuer is riding, and will continue to ride, in the months and years to come.”

How High Will Mastercard Charge?

Keefe, Bruyette & Woods, a boutique investment firm that has carved out a specialty in financial stocks, recently raised its 12-month price target for Mastercard to $226, up from $205. With the stock trading around $201.50 on July 10, the target price is about 12 percent above the current share price.

With a small dividend that yields about .50 percent annually, an investor could achieve a 12-month gain of roughly 12.76 percent, based on the investment firm’s analysis. As a result, Mastercard offers a chance for investors to capture both capital appreciation and dividend income. 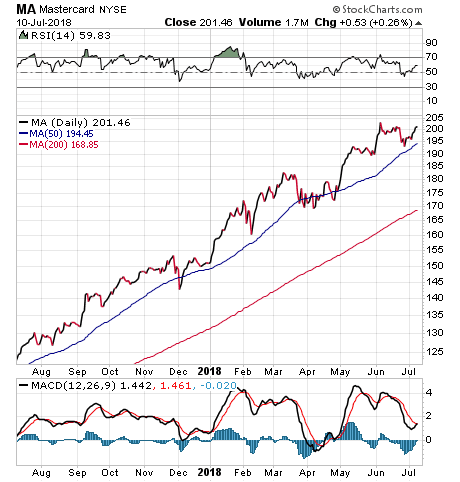 The $226 price target, assigned to Mastercard by Keefe, Bruyette & Woods analyst Sanjay Sakhrani, is based on a valuation of 31 times his revised estimated earnings per share (EPS) of $7.30 for 2019, compared to his previous estimate of $6.90 per share. The previous estimate valued Mastercard at an EPS multiple of 30, but he chose to raise it in May.

Despite a macro environment that includes the threat and rollout of trade tariffs by governments around the world, volume growth for Mastercard on a foreign-exchange-adjusted basis has remained “robust” and could rise further if the U.S. and other key economies improve, Sakhrani wrote in a recent research note. In addition, Mastercard’s global scale provides operating leverage, flexibility in returning capital to shareholders and potential acquisition opportunities due to its high free cash flow, he added.

The outlook in Europe remains positive for Mastercard, with retail sales picking up in the United Kingdom, even though the so-called “Brexit” transition remains a risk, Sakhrani noted.

Latin America is continuing to recover, and the region generally is reporting reduced unemployment and improved consumer confidence, Sakhrani wrote. However, the economic picture includes some uncertainty due to a new president in Mexico and an upcoming national election in Brazil.

As far as the credit card services industry overall, Sakhrani opined that the payment industry has the potential to generate “solid organic growth as consumers and businesses shift from traditional forms of payment, such as cash and checks, to credit and debit cards.” He also is predicting increased use of cards to make payments throughout the world.

However, the positive outlook for Mastercard is not without risks, which include a possible global economic slowdown, regulatory scrutiny, litigation, pressure from consolidations and competition, concentration and fluctuations in foreign exchange, according to Keefe, Bruyette & Woods.

Mastercard Offers Opportunity to LEAP Rather than Just Charge

Seasoned investment professional Bryan Perry is another fan of Mastercard. He is recommending the company in his Instant Income Trader advisory service. Perry, who also writes the monthly Cash Machine investment newsletter, told me he forecasts that MasterCard will grow its revenues by 20% and its earnings by 40% this year. A “key driver” of this hot growth trend is rising employment that feeds consumption expenditures, he added.

“That same higher level of spending is also seeing a broader adoption of digital payment methods instead of cash,” Perry said. “MasterCard is also growing market share outside the United States by having a more universally accepted platform and successfully co-branding with large banks.”

Perry’s Instant Income Trader service is uniquely designed to profit from expensive stocks, such as Mastercard, that are close to $200 per share or more. He recommends long-term equity anticipation securities (LEAPS) call options that he advises subscribers to buy first before they then enter an order to sell a corresponding number of out-of-the-money, very short-term call options on a rising stock. His strategy is to recommend the purchase of in-the-money LEAPS that will be closely correlated to rise of a stock while recommending investors sell an out-of-the-money call option on the same stock to capture income from investors who buy the latter option to take the bullish side of the trade. The strategy offers a way for investors to benefit from the ascent of a high-priced stock without needing to pay the market price for each share.

Mastercard appears to be on an unrelenting rise fueled by growth in credit and debit card payments in the United States and elsewhere. Based on the views of market professionals who are following the stock closely, investors seeking a double-digit-percentage return during the next year may want to give an investment in Mastercard strong consideration.