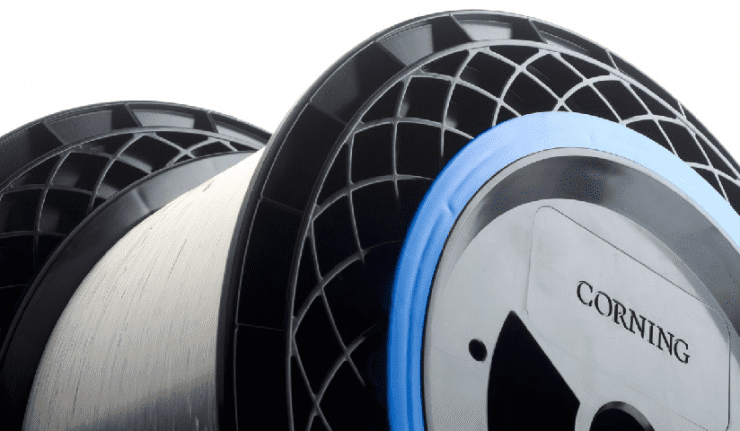 Unlike many of its peers that are still struggling to recover all their losses from the overall market pullback in the last quarter of 2018, Corning Incorporated (NYSE: GLW) recovered much quicker and delivered to its shareholders capital gains of nearly 17% over the past 12 months.

While declining with the general market correction in 2018 like many of its peers, Corning’s share price recovered much faster to achieve the double-digit-percentage gain for the year. The share price experienced a higher level of volatility during the past 12 months but maintained its long-term uptrend.

While experiencing moderate volatility and several corrections, Corning’s share price advanced nearly 25-fold since crashing from more than $110 in late 2000 to less than $1.40 in late 2002 in the aftermath of the dot-com bubble bursting. In addition to the substantial capital losses, the company also suspended its dividend distributions between 2001 and 2007. However, nearly two decades after the dot-com bubble fiasco, Corning seems well-positioned for continued future growth.

On January 29, 2019, Corning Incorporated reported a 15% year-over-year core sales increase to $3.1 billion for the last quarter of 2018. The $0.59 earnings per share (EPS) corresponds to a 28% advancement over the fourth quarter of last year. Additionally, $0.59 last-quarter EPS topped the $0.57 consensus expectation of Wall Street analysts by 3.5%. Corning’s EPS figures also beat analysts’ expectations for each of the three prior quarters in 2018.

For the full-year 2018, the company reported that its core sales rose 11% versus the previous year to $11.4 billion. Additionally, the full-year EPS of $1.78 also increased 11%. All of the company’s business segments boosted total sales versus the previous year. Corning also returned more than $2.9 billion to its shareholders last year — $700 million through dividend distributions and more than $2.2 billion through the company’s common stock repurchase program.

Entering the trailing 12 months on a downtrend, Corning’s share price had already dropped nearly 20% from its previous 52-week high that occurred in early January 2018. The share price continued its downtrend and lost another 11% before reaching its 52-week low of $26.35 on May 30, 2018. Fortunately for Corning’s shareholders, the price reversed trend and recouped all its losses since the onset of the trailing 12-month period by mid-July. The price continued to advance until closing at its new 52-week high of $36.13 on September 20, 2018, for a total gain of more than 37% over the May low. Excluding the artificial share price spike to more than $110 during the dot-com bubble, this current one-year peak of $36.13 was also Corning’s all-time high price.

Regrettably, concerns over the trade conflict with China and uncertainties regarding what the Fed will do with interest rates put downward pressure on the overall markets and the share prices of most equities followed with a downward trend. Many equities declined towards their respective 52-week lows on December 24, 2018, before reversing trend and heading higher in 2019. Corning’s share price also reversed direction on Christmas Eve. However, the inflection point price was more than 6% above Corning’s 52-week low from May 2018.

The company supplemented its capital gains with a steady stream of dividend income distributions, which combined for a total return of more than 19% over the past 12 months. This return level is significantly better than most other equities that delivered total losses or low single-digit-percentage total returns over the past year because of slow share price recovery. Additionally, Corning also provided its shareholders with total returns of nearly 95% over the past three years. The 95% total return over three years corresponds to an average annual growth rate of 25%. Unfortunately, the longer-term returns were only marginally higher because Corning’s share price had to recover from a 30%-plus decline in 2015. Therefore, the five-year total return of 96% was only 1% higher than the three-year return.