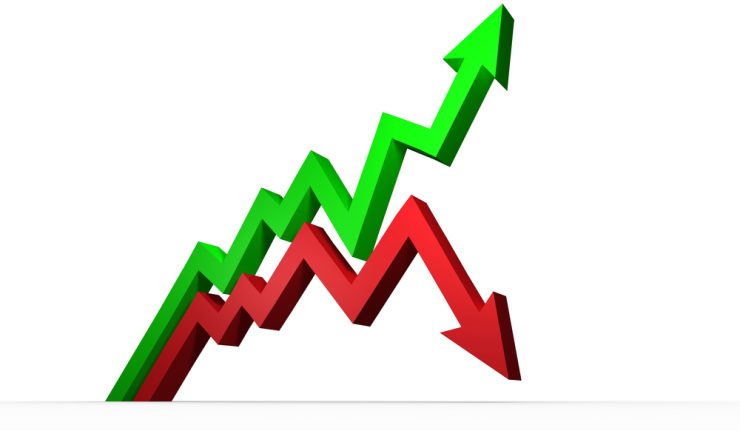 Join Dr. Skousen in Washington, D.C. on Wednesday, May 29th…

At 1:00 p.m. that day, Dr. Skousen will begin filming an important new investment video — and he wants YOU to be part of our small, live audience. As a “thank you” for attending, he’ll personally hand you a signed hardcover copy of his book, Maxims of Wall Street. Additionally, he’ll conduct a short Questions & Answers session immediately following the taping.

Please note: Seating is limited in the studio, so he is encouraging you to sign up now if you’re interested in attending. Click here for all the details and to confirm your seat. Dr. Skousen looks forward to seeing you in downtown Washington, D.C. on May 29!

Here at the Mont Pelerin Society meetings in Texas, I met with Michael Walker, the founder of the Fraser Institute and a former Canadian banker. He is the father of the famous “Economic Freedom Index” that he developed along with Milton Friedman and other free-market economists.

Walker has advanced the shocking thesis that interest rates in the United States and the rest of the world are in a major secular decline that will continue until at least 2030!

Interest rates gradually rose after World War II, hitting a record high of 21% in the early 1980s. Since then, interest rates have been in major secular decline. It now has lasted almost four decades. Indeed, 30-year Treasuries are yielding less than 2.8%. 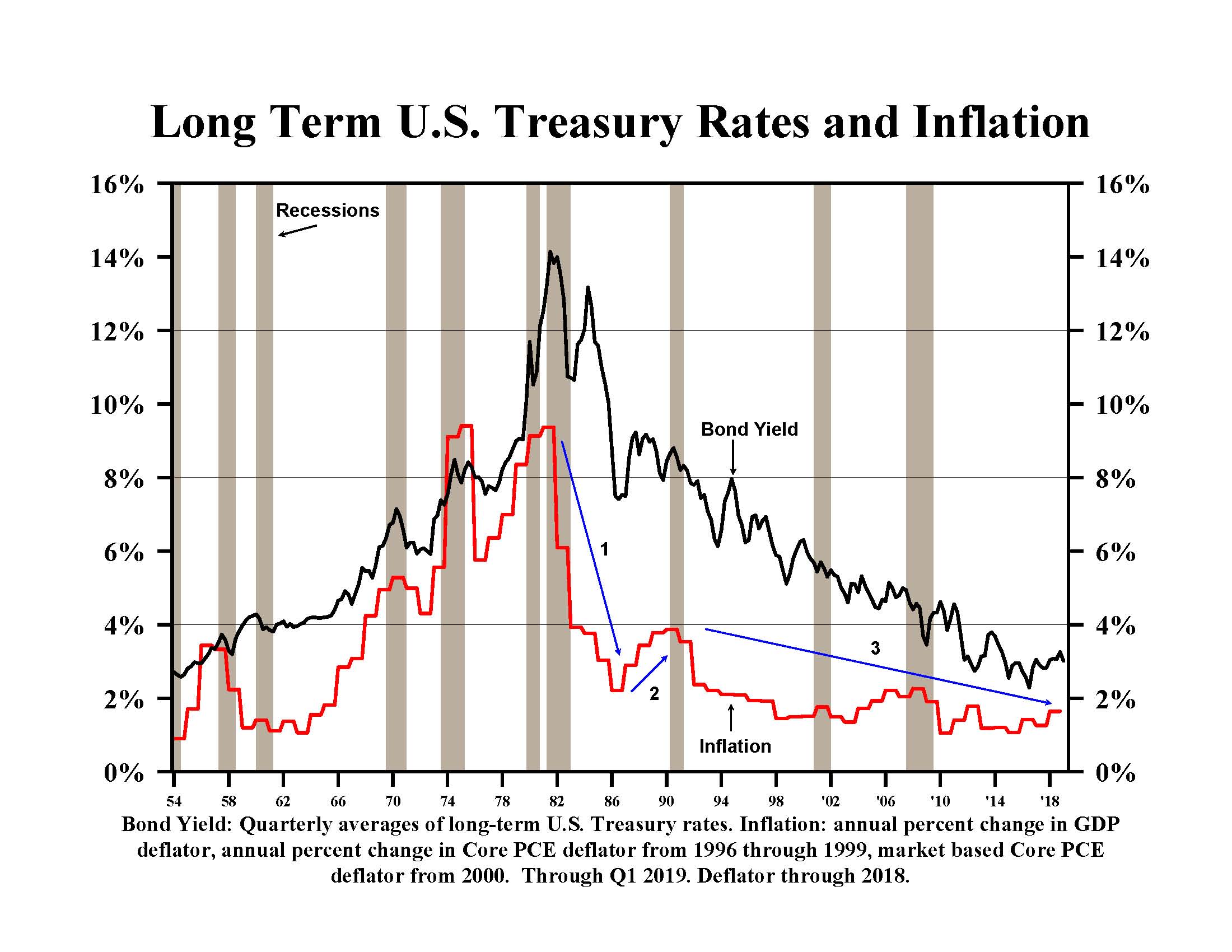 What made the difference? Inflationary expectations, for one thing. Inflation rose into the early 1980s, then started its gradual decline.

The Population Bust and the Aging Crisis

But there also is the population factor. Prior to the early 1980s, population growth was dynamic and growing fast in the United States. However, since 1982, population growth in America and elsewhere has been on the decline and recently has slowed dramatically.

That means lower interest rates, according to Walker. Why? Because “an aging population is creating a borrower’s market.” What happened in Japan is likely to happen to us — despite high national debt, Japan’s interest rates are extremely low.

You can read his article by clicking here.

According to Walker, it is unlikely that interest rates will rise any time soon — the Fed has already postponed raising rates in 2019, and bond prices have rallied.

“It’s time to abandon the notion that world interest rates are going back up to historic levels,” Walker wrote.

What about the fast-growing national debt? The growing deficit has not hurt interest rates so far. In fact, the “savers market” is so powerful that interest rates have declined this year, even in the face of higher deficits.

This is great news for our dividend-paying stocks, which pay a lot more than bonds. They are likely to keep rising for years to come. The mother of all bull markets is still intact!

Candace Owens, the former communications director for Turning Point USA, will be joining us for the first time to talk about her emotional confrontation and debate with House Democrats on Capitol Hill. If you haven’t seen the encounter on nationalism vs. globalism, watch it here.

If you haven’t seen her in person, you are in for a treat.

FreedomFest is less than two months away! Sign up now before it’s too late. The dates are July 17-20, at the Paris Resort, Las Vegas. Get $50 off the registration fee by using code Eagle50, and go to www.freedomfest.com, or call toll-free 1-855-850-3733, ext 202. Our room block at Paris Resort is filling up fast. (Bally’s next door is already full.)

Is Faith the Rejection of Reason?

At the Mont Pelerin Society meetings in Dallas, I debated Yaron Brook on religion. Yaron is an Israeli-American who is the chairman of the Ayn Rand Institute. His parents were socialists, but after reading “Atlas Shrugged,” he became an avid defender of free-market capitalism.

So far, so good. But there’s a downside to Randian philosophy — the rejection of religion and the supernatural.

Like Ayn Rand, Yaron Brook is a die-hard atheist who believes that there is nothing beyond the five senses that constitute objective reality. According to Brook, the idea of an all-powerful, all-knowing God and an afterlife, is a fraud.

Before the audience of distinguished economists, political scientists and philosophers, he announced that faith was irrational and “the rejection of reason.”

Really? Even though I have never been to Dubai, I have strong faith that it exists. When the economy suffers from a recession, I have faith that it will recover.

In other words, we all live in an uncertain world guided by faith and reason. And faith in our understanding of the natural and the spiritual world increases with our experience.

As a Christian, I’ve always been impressed by the admonition of Christ, “If any man will do my will, he shall know of my doctrine, whether it be of God, or whether I speak of myself.” (John 7:17)

After reading the life of Christ in the Bible — his sermons, his miracles, his death and his Resurrection — we are encouraged to live his doctrine and test it out to see if it’s true.

Religion and the Scientific Method

Testing a hypothesis is known as the scientific method and known as “inductive” reasoning. Faith in religion is like planting a seed — if it is a good seed, it grows and we gain confidence in its truthfulness. If it’s a bad seed, the results will be negative and should be rejected. As Jesus said, “By your fruits you shall know them.”

Studies show that people of faith live longer, are healthier and are happier and more successful in life. It pays to be religious.

Spiritual experiences — answers to prayer, miracles and insights from heaven in business and life — are the evidence that God lives and there’s life after death, as the Bible promises. Our faith increases as we receive these experiences and decreases if they don’t happen (not every prayer is answered).

If you read the Four Gospels in the New Testament, you will note how often the authors say that they are “eyewitnesses” to Christ’s life and resurrection. The apostles and disciples demanded evidence of his power and his resurrection. Doubting Thomas is famous for refusing to believe that Christ had come back to life, until he saw and met him in person. For faith to grow, it needs real evidence.

Christian theologians have long taught that God works through faith and reason. Christians were the first to build universities and hospitals in the West. We are not anti-reason.

One of the most memorable debates we ever had at FreedomFest was between Dinesh D’Souza and Christopher Hitchens. It was standing room only and Dinesh barely won the debate in favor of religion.

It is time for an encore. This year we will host a debate between Michael Shermer, publisher and editor of Skeptic magazine, and Dr. Hyrum Lewis, professor of history at Brigham Young University-Idaho and author of the new book, “There Is a God: How to Respond to Atheism in the Last Days.” The two will clash on all the arguments — free will, materialism, suffering, near-death experiences, design and science vs. religion. I can’t wait!