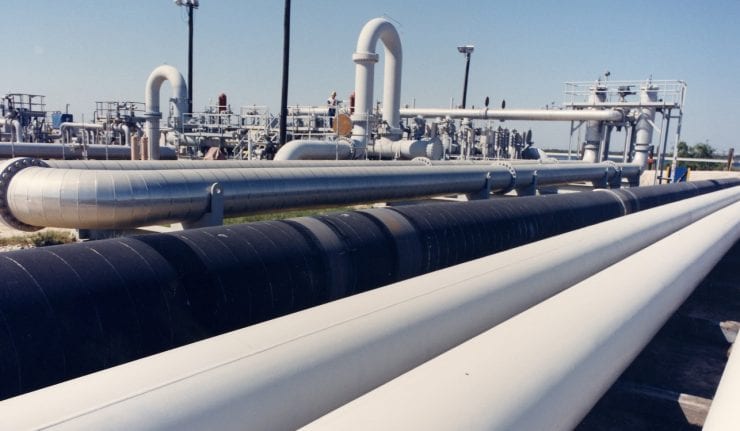 Oil prices remained mostly in the $50 to $60 range over the past 12 months, but several energy stocks were able to deliver double-digit-percentage returns from a combination of capital gains and dividend distributions.

Currently, energy stocks do not offer dividend yields or total returns as high as some equities in the Financials or Technology sectors. However, all but one of the five energy stocks below have reversed their underperformance over the past several years to deliver robust one-year returns for investors who are looking appropriately to diversify a portion of their portfolio for long-term asset protection.

Two of the energy stocks below delivered the majority of its one-year gains from dividends. On average, the five energy stocks derived approximately half of their one-year total returns from income distributions, which is not unusual as most of the equities on this list operate as master limited partnerships (MLPs). As such, the companies must distribute most of their earnings to enjoy the benefit of no corporate income tax liability.

In ascending order by their respective one-year return, below are the five energy stocks with double-digit-percentage returns over the past year.

5 Energy Stocks with Double-Digit-Percentage Returns Over Past Year: #5

Headquartered in Parsippany, New Jersey, and founded in 2013, PBF Logistics owns and operates terminals, pipelines, storage facilities and other logistics assets for transportation and storage of crude oil and refined petroleum products in the United States.

The company has hiked its quarterly dividend payout amount every period since introducing dividend distributions in the second half of 2014. Over the past 26 consecutive quarterly dividend boosts, PBF Logistics has enhanced its dividend payout amount 225%, which is equivalent to an average growth rate of 6.1% each quarter, or nearly 22% per year. The most recent quarterly payout of $0.52 corresponds to a $2.08 annualized payout and a 9.7% forward dividend yield, which is nearly 11% higher than the company’s own five-year yield average of 8.7%.

The share price lost more than one-third of its value between the company’s formation in 2014 and early 2016. However, since reaching its all-time low in early-February 2016, the share price has experienced some volatility while riding a relatively steady uptrend. The share price has gained 29% since the beginning of 2016 despite a nearly flat performance over the trailing 12 months. Because the share price offered minimal gains, dividend income provided more than 90% of the 10.4% total returns over the last year.

5 Energy Stocks with Double-Digit-Percentage Returns Over Past Year: #4

Headquartered in Tulsa, Oklahoma, and founded in 2000, Magellan Midstream Partners, L.P. engages in the transportation, storage and distribution of refined petroleum products and crude oil in the United States.

The company has increased its annual dividend payout amount in 72 out of 76 quarters since introducing dividends in May 2001, including the last 39 consecutive periods. Since initiating dividend payments, Magellan Midstream Partners enhanced its quarterly payout more than 14-fold, which is equivalent to an average dividend growth rate of 3.5% per quarter, or nearly 15% per year. For the upcoming pay date in mid-February, the company has boosted its quarterly payout to $1.0275, which is 0.74% higher than the November 2019 payout, as well as 3% higher than the same period last year.

After initially gaining more than 17% over its 52-week low in early-February 2019, the share price peaked at $67.36 in mid-September. However, by the end of November, the share price had given back almost all those gains to fall less than 2% above the 52-low. Since reversing direction, the share price has gained nearly 10%. Yielding 6.4%, dividend distributions provided almost half of the company’s 13.4% total return over the trailing 12 months.

5 Energy Stocks with Double-Digit-Percentage Returns Over Past Year: #3

The company’s $0.46 quarterly payout amount for the upcoming round of dividend distributions on Feb. 14 is nearly 3.7% higher than the payout from the previous period and 15% above the $0.40 payout from the first-quarter last year.  Shell Midstream Partners has boosted its total dividend payout every quarter since its foundation in 2014 at an average growth rate of 7.7%, which is more than 36% per year. The upcoming quarterly payout converts to a $1.84 annual payout and a 6.4% forward dividend yield.

After reaching its five-year low below $17 in late 2018, the company’s share price changed direction and provided asset appreciation of nearly 10% over the trailing 12 months. Combined with dividend payouts that yield nearly 9%, Shell Midstream Partners rewarded its shareholders with a total return of almost 20% over the last year.

5 Energy Stocks with Double-Digit-Percentage Returns Over Past Year: #2

The partnership — a subsidiary of Green Plains Inc. (NASDAQ:GPRE) — has boosted its dividend distribution amount every year since its founding. Over the past four consecutive annual hikes, Green Plains Partners advanced its annual payout amount nearly 20%, which corresponds to an average distribution growth rate of 4.4% per year. To take advantage of the upcoming round of payouts on Feb. 7 investors must claim stock ownership before the Jan. 31 ex-dividend date. The current $0.475 quarterly payout corresponds to a $1.90 annualized distribution and a 13% forward yield.

After reaching its all-time high in October 2016, the share price decreased more than 40% before bottoming out at its four-year low in August last year. While flat for the trailing 12-month period, the share price has reversed its direction to embark on a steady uptrend since its August 2019 low. Dividend distributions were unable to offset the share price decline in 2016, which resulted in a single-digit-percentage total loss over the trailing three years. However, even with only marginal asset appreciation since last January, the robust dividend distribution yield provided most of the 13.3% total returns over the trailing 12 months.

5 Energy Stocks with Double-Digit-Percentage Returns Over Past Year: #1

Delek Logistics Partners, L.P. owns and operates logistics and marketing assets for the transportation and storage of crude oil, as well as intermediate and refined products.

While declining significantly at the beginning of the trailing five-year period, Delek’s share price reversed the downtrend after its five-year low in late-2016. Since that trend reversal, the share price advanced more than 45%. Because of moderate volatility, the share price gained 8% and combined with dividend distribution for a total one-year return of almost 23%. With its double-digit-percentage yield, dividend distributions accounted for almost 60% of the combined gains over the past year.

previous article
You Blew it! Is War Good for the Economy?
next article
Small-Cap Telecom Stocks Offer Potential to Outperform Industry Giants

share on:
Exclusive  A Guide to REIT Taxation to Enhance Returns