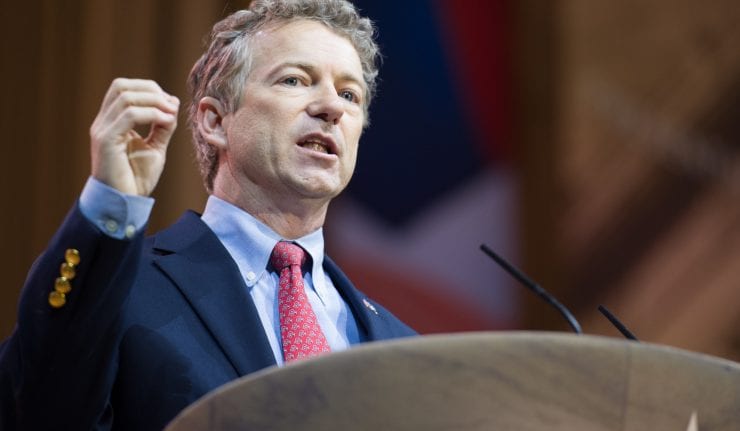 Last night, my wife and I hosted a reception and fundraiser for Senator Rand Paul and his wife, Kelley, at our new home in California. (See the photo below.) We had over 50 investors and concerned citizens attend.

Sen. Paul and his wife have written a full-length critique, “The Case Against Socialism.” They have done a great job exposing the failure of socialism and demonstrating it’s all about incentives. Interfering with the free market only makes matters worse. 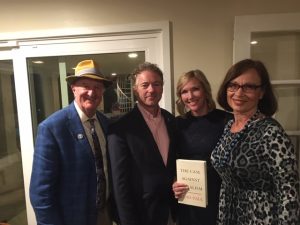 He takes apart every argument made by socialists today, including the self-proclaimed socialist Sen. Bernie Sanders, who sadly is now leading in the Democratic primaries and has a 47% chance of winning the nomination for president on July 13-16 in Milwaukee.

Want to get away? Come to FreedomFest in Las Vegas, Nevada, since it will be held at the same time as the Democratic National Convention!

Sen. Paul has two excellent chapters on Scandinavia, which Bernie Sanders points to as an ideal socialist state. But as Sen. Paul told us last night, “Sweden’s riches actually came from capitalism,” and Sweden has been moving away from socialism since a monetary crisis occurred in 1992.

The Swedes cut taxes, privatized government programs, converted their social security system to a defined-contribution plan and introduced school choice. Sweden has been booming ever since.

Last night, Kelley Rand pointed out that “free” education is expensive in Sweden and other European states that offer it. Most European youth end up heavily in debt (due to living expenses while going to school) and often don’t get into the top schools.

Sen. Paul also has some good chapters on the benefits of capitalism. “Capitalism is the more moral system… it benefits the middle class… and the poor are better off under capitalism.”

Senator Paul on President Trump and the Middle East

Sen. Paul, his wife and I (and a dozen others) went to Israel several years ago on a fact-finding tour. So, I asked Sen. Paul about President Trump’s Middle East peace plan between Israel and the Palestinians.

He said the President is frustrated in finding a consistent policy in that volatile region of the world. The ultimate goal is to get out of Afghanistan and let them govern themselves.

Sen. Paul told me that he has every intention of joining us in Las Vegas in July and will confirm in the next week or two. Stay tuned!

A Tale of Two Economies: Hong Kong vs. Cuba

That’s certainly the case with Hong Kong and Cuba. In his book, “A Tale of Two Economies: Hong Kong, Cuba and the Two Men Who Shaped Them,” UK economist, Neil Monnery, points out that in the early 1960s, the per capita income of both Hong Kong and Cuba was similar.

Then everything changed. Under Castro’s communist control, Che Guevara was appointed Minister of Industry and President of the Bank of Cuba. He followed the doctrines of Marxism-Leninism. The Cuban government confiscated land, nationalized industries and the banks and started running businesses. It’s been a disaster.

‘The Book the Socialists Fear the Most’

My book, “The Making of Modern Economics: The Lives and Ideas of the Great Thinkers” has been highly successful. It does what no other book can do — talk directly to the rising generation.

My book is now the most popular textbook in the story of the great economic thinkers, from Adam Smith to Vernon Smith.

It has entire chapters on both sides of the socialist/capitalist debate.

On the capitalist side, it has chapters on Adam Smith, the French laissez-faire school of Say and Bastiat, the Austrians like Mises and Hayek and the Chicago school of Milton Friedman.

On the socialist side, it has chapters on Karl Marx, Thorstein Veblen and the Institutionalists and John Maynard Keynes.

I explain the pros and cons of both sides, and most students ultimately come away seeing the superiority of Adam Smith’s “System of Natural Liberty,” the heroic figure of my book. 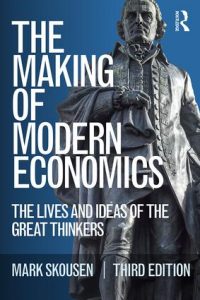 My chapters, “Marx Madness Plunges Economics into a New Dark Age,” and “The Keynes Mutiny: Capitalism Faces its Greatest Challenge” have been called “the most devastating critique of Marx and Keynes ever written.”

“The Making of Modern Economics” does not feel like a textbook – – it has pictures, lots of stories and even music selections for all the great thinkers.

John Mackey, CEO of Whole Foods Market, writes, “Skousen’s book is fun to read on every page. I have read it three times. I love this book and have recommended it to dozens of my friends.”

Roger Garrison, professor of economics at Auburn University, writes, “My students love it. Skousen makes the history of economics come alive like no other textbook.”

The book is now in its 3rd edition, and it’s won the Choice Book Award for Outstanding Academic Excellence.

The publisher, Routledge, charges $49 for the paperback, but you can get it directly from me for only $35. I pay the postage and will autograph each copy. For orders outside of the United States, contact Harold below for additional charges.

To purchase a paperback copy of “Making of Modern Economics,” go to www.skousenbooks.com, or call Harold at Ensign Publishing, 1-866-254-2057. The book is also available in hardback ($85), e-book or audio book (see Amazon).

At this year’s FreedomFest 2020, I am organizing an emergency meeting, calling all investors and freedom lovers to join the major freedom organizations and think tanks to develop a strategy to fight against the socialists and protect your assets.

This is the first emergency meeting we’ve had since the 2008 financial crisis.

The socialist Democrats are downright scary in their calls for a wealth tax, socialized medicine, a stock transaction tax and free college education to brainwash our future leaders. It could bankrupt our economy, end the bull market on Wall Street and destroy our way of life.

Too much is at stake.

I am calling upon all investors and freedom lovers to join me — to learn, network and fight for our liberties like never before.

I am also organizing a critical session on “Ludwig von Mises and the Socialist Calculation Debate,” in honor of the 100th anniversary of Mises’ work, that will include Mises Institute economist Tom Woods, the premier Misesian Professor Richard Ebeling and for the first time, Nobel Prize economist Vernon Smith.

“From Adam Smith to Vernon Smith”

Vernon Smith (right) and me posed in front of the Adam Smith statue at Chapman University.

Vernon Smith, professor at Chapman University, is considered the world’s most path-breaking scholar in experimental economics, and through his creative genius, has re-ignited the virtues of Adam Smith’s “system of natural liberty” as the best alternative to the socialist agenda.

I am thrilled to have Vernon and his wife, Candace, joining for the first time. (Candace, who is an expert on business etiquette, will also be speaking.)

Over 600 investors and concerned citizens have already signed up for this year’s FreedomFest, 30% ahead of last year. I am expecting a record crowd because of our incredible line-up and the dangers our country and liberties face.

In honor of the 40th anniversary of my newsletter, every subscriber who comes to FreedomFest will receive a ticket to a special reception, including a free 2020 American eagle silver dollar and a copy of the new 7th edition of “The Maxims of Wall Street,” as my gift to you for being a loyal subscriber over the years.

Baseball in Disgrace… and Denial

I’m a big baseball fan and I played the game a lot in my youth, as well as softball while growing up.

I actually led two teams to a softball championship in Winter Park, Florida, as an adult in the 1990s. Our championship teams did not need to steal any signs to win.

The cheating scandal, involving the use of modern technology to steal the signs of opposing pitchers, ensnared the Houston Astros and, in my opinion, makes the team’s 2017 World Series title illegitimate. This situation is certainly worse than deflating NFL footballs in the NFL playoffs, or even the steroid crisis in baseball a decade ago. This was a case of “organized crime,” as Los Angeles Times columnist Bill Dwyre calls it.

It is shocking that the baseball commissioner gave into the powerful baseball union and didn’t punish any of the players. What a disgrace. The Astros should be stripped of their World Series rings.

Some of the opposing pitchers lost their jobs after the Astro hitters stole their signs — and the careers of some of the hurlers never recovered.

The Los Angeles Dodgers could have had a World Championship in 2017.

I wouldn’t be surprised to see pitchers of other teams retaliate against the Astros’ hitters when the 2020 season begins.