My friend Alex Green, investment director of the Oxford Club, recently made the bold statement that precious metals have been lousy inflation hedges. He wrote, “Gold hit a high of $875 an ounce in January 1980. And even though we experienced double-digit inflation that year, it lost a third of its value by Dec. 31. And it kept dropping for almost 20 years. Gold bugs who purchased gold at the high 33.5 years ago still haven’t broken even in inflation-adjusted terms. Heck, they still hadn’t even broken even when gold peaked above $1,900. If that’s an inflation hedge, I’m Woodrow Wilson.”

Alex argues that investors should choose stocks instead of gold or silver. Stocks, he said, are a “genuine inflation hedge.”

I agree with Alex on one thing: stocks are a superior inflation hedge over the long run because they represent a growing economy. U.S. stock indexes have outperformed gold and silver by a long shot (although I should add that a sharp rise in inflation can hurt stocks for years — witness the 1970s and early 2000s).

But I think he’s wrong about gold and silver as long-term inflation hedges. Granted, if somebody had the misfortune of buying gold at the top at $875 an ounce in 1980, or $1,900 in 2011, his investment has indeed proven to be a lousy bet. The same could be said if silver was purchased at its high of $50 an ounce.

But precious metals traditionally have held their purchasing power over long periods of time. The classic study on the subject is “The Golden Constant, 1560-1976,” by Professor Roy Jastram, and updated through 2007 by the World Gold Council. The following Purchasing Power of Gold chart demonstrates how the yellow metal has done over the long term: 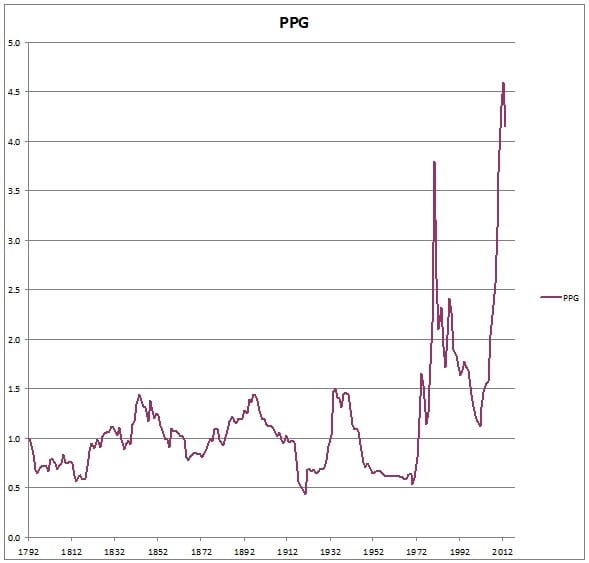 You can see from the preceding chart that the long-term purchasing power trend for gold was relatively flat (around 1.0 on the chart). But since 1971, when the world went off the international gold standard, gold has become a superior inflation hedge. Since 1971, it has done a lot better, despite its volatility.

According to the chart, gold at $1,240 an ounce today has grown approximately 3.3 times its real value since 1971. Of course, U.S. stock indexes have done even better, but gold is no slouch either. 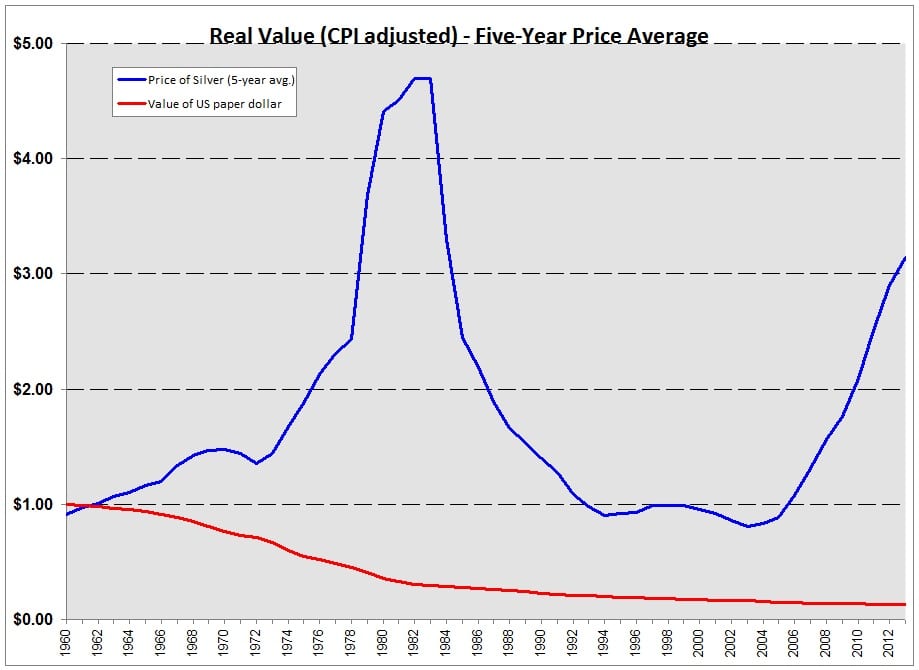 Another benefit of investing in precious metals is that they offer a wonderful forced savings plan. Over the years, I’ve asked audiences at investment conferences (including the annual Investment U conference) how many of them have purchased gold and silver coins. Usually, about half the people raise their hands. Then I ask, “How many have sold any gold or silver?” Almost every hand goes down. People tend to buy coins, but not sell them because of the hassle and tax implications.

My recommendation: Buy gold and silver coins for the long run. But don’t go overboard. Consider them insurance against bad times and invest no more than 5% of your investment portfolio.

You Blew It! Police Gone Wild

The latest case of uncontrolled police involves a University of Virginia student arrested on felony charges after the undercover agents (not dressed in police uniforms) suddenly confronted her for buying a beer under the age of 20. In reality, she was carrying a blue carton of LaCroix sparkling water! Bottled water! But that didn’t stop them from attacking her and her friends.

If you think this kind of police brutality is exceptional, think again. It happened 10 years ago to my then-teenage daughter when she was arrested, handcuffed and verbally abused (with every four-letter word you can think of by the police “officers” — certainly not gentlemen) for throwing a water balloon toward some policemen on bicycles. It didn’t even hit them, but they were so incensed that they arrested her, impounded her car, left her in jail overnight, and wanted to prosecute her for a felony. Fortunately, we had a good attorney that resolved the matter, but the encounter left my daughter and the rest of my family with deep suspicion of the police ever since.

O Attention anyone living in or near Las Vegas: John Stossel is taping his Fox Business show from 7- 9 pm on Thursday, July 11 (think 7-11) in the Celebrity Ballroom at Planet Hollywood in Las Vegas. All FreedomFest attendees will get guaranteed seating up front for the STOSSEL show. However, we have reserved about 1,000 FREE tickets to the general public. If you know anyone in the Las Vegas area who would like to come, please invite them to the Stossel program. All they have to do is email STOSSELTIX@foxbusiness.com with the subject line, “FREEDOMFEST SHOW TICKETS,” and list the names of anyone who wishes to come. Note: If you are already signed up for FreedomFest, you do not need to get a ticket. You will receive one automatically in your packet when you arrive.

LAST CALL: We always have last minute registrations and people who sign up at the door. Don’t miss the fireworks, the most exciting event in Vegas all year. To register, go to www.FreedomFest.com or call Tami Holland, 1-866/266-5101. If you want to see the entire program, go to http://freedomfest.com/wp-content/uploads/2013/06/FF-2013-Agenda-Grid.pdf. Fly there, drive there, bike there, be there for the “greatest libertarian show on earth.”

O San Francisco Money Show, Aug. 15-17, San Francisco Marriott Marquis: Join me and all the Eagle editors (Doug Fabian, Nicholas Vardy and Chris Versace), plus William O’Neil (founder of Investor’s Business Daily), Frank Trotter (Everbank), Matt Schifrin (Forbes), John Bollinger, Chuck Butler and many others. There is no charge for this conference, but you do need to register. Call 1-800/970-4355, and mention code #031733.