As expected, this past week was a slow one in terms of fresh domestic economic data, amid rising concerns about slowing global growth, as well as growing tensions between Iran and Israel. Those worries and the potential impact on global oil and gas prices caused the S&P 500 to register its first meaningful one-day drop of 2012. While the market has rebounded, aided this morning by what pundits may describe as better-than-expected numbers from the U.S. Bureau of Labor Statistics’ February snapshot for job creation and unemployment, it is looking like the S&P 500 will finish the week essentially unchanged.

Earlier this week, we received ADP’s take on private sector job creation in February and the headline showed a net increase in new jobs month over month. Some quick analysis on ADP’s findings, however, reveal the number of jobs created in the first two months of 2012 fell compared to 2011. For the first two months of 2011, ADP’s findings showed 406,000 non-farm jobs were created compared to 389,000 for the first two months of this year — a contraction of more than 4%. Turning to February’s Challenger Job Cuts Report, we find the pace of planned layoffs year to date is up 18% over last year, with 105,214 job cuts announced through the first two months, compared to 89,221 during the same period in 2011. All in all, when we put these metrics to the test and find slower job creation year over year and an increase in planned layoffs, the aggregated vector is headed in the wrong direction.

With that context, it becomes far clearer as to why the Congressional Budget Office (CBO) is forecasting the official unemployment rate to remain above 8% through 2014. The CBO’s forecast reflects weak demand for goods and services, and a growing mismatch between employer needs and worker skill sets. I continue to have concerns about overall demand in the coming months, given the recent move in oil and gas prices and what that means for personal spending as disposable income comes under pressure. Average gas prices, as reported by AAA’s Daily Fuel Gauge report, have climbed to $3.76 per gallon this week, up from $3.48 per gallon just a month ago.

In terms of the growing mismatch between employer needs and workers skill sets, this situation reminds me of a recent comment from staffing company ManpowerGroup. The global workforce solutions company found that 52% of U.S. employers responded in a survey that they have difficulty filling positions because of talent shortages. Meanwhile, with state budgets and funding under pressure, public colleges have raised tuition and are cutting certain programs to rein in costs. This situation has led to a net increase in consumer credit over the last five months, with the most recent data in January marking the largest month-over-month gain since 2004. January’s increase in consumer credit was driven almost exclusively by student loans from the federal government.

While near-term decisions by universities reflect a need to rein in expenses, such moves impact the longer-term need to educate and invest in the domestic workforce. Studies show that an educated populace leads to faster economic growth and a more stable democracy, while benefiting the poorest workers the most. The post-World War II economic boom, for example, has been attributed to increased college enrollment, thanks to the G.I. Bill. Meanwhile today, according to the February Employment Report from the Bureau of Labor Statistics, 57% of those unemployed, roughly 7.3 million Americans, have only some college or less for their educational background.

To me, the current skill mismatch between employers and employees equates to a point of pain. As I often have found that solutions to pain points make for very good investments, this one is at the heart of my Better, Smarter America PowerTrend.

There Are More Scarce Resources than Just Oil

The February run-up in both gas and oil prices should serve as a reminder that certain natural resources are, indeed, limited. As emerging economies experience a favorable move higher in disposable income and trade up in their purchase decisions, there will be greater demand for resources such as fossil fuels, oil and natural gas, as well as mineral resources, such as copper and others. Demand also will rise for water.

Many people, particularly in the Western world, may be shocked to find that water is not a limitless resource, given the amount of plastic water bottles offered by Coca-Cola, PepsiCo, Poland Spring and others. Despite what many think, fresh water is not in abundance. While nearly 70% of the world is covered by water, only 2.5% of it is fresh and just 1% of our freshwater is easily accessible.

Meanwhile, the global population continues to grow — ensuring greater competition over time for this scarce resource. Even without population growth, data from the United Nations points out that water usage has grown at more than twice the rate of population increase in the last century. By 2025, an estimated 1.8 billion people will live in areas plagued by water scarcity, with two-thirds of the world’s population living in water-stressed regions due to use, growth and climate change. I will provide more analysis on this situation in the coming weeks as I address my Scarce Resource PowerTrend.

Sifting through data in its myriad forms helps confirm or redirect my PowerTrends, as I flesh out my investing mosaic. Here are some of the corporate earnings reports and U.S. government statistics that I will be digesting next week. 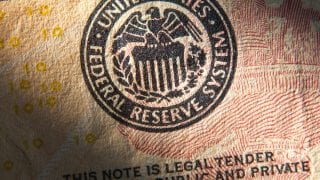 The $31 Trillion Elephant in the Fed’s Room