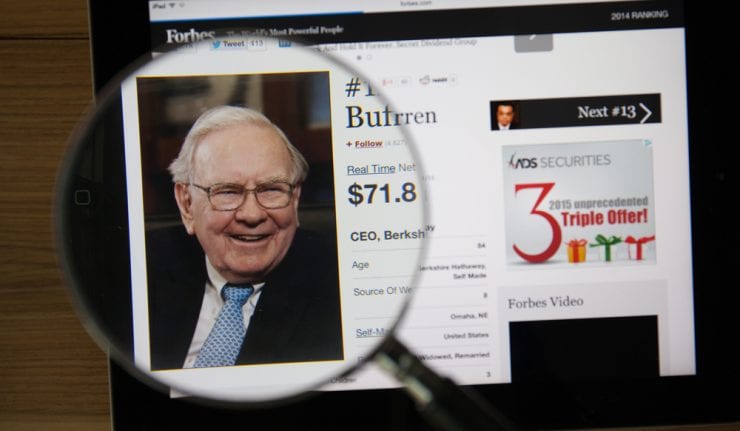 That’s why you may be surprised to learn that Buffett’s top bet — accounting for a whopping 19.21% of Berkshire Hathaway’s (BRK-B) publicly traded stock portfolio — is a brand new company established only in 2015.

But The Kraft Heinz Company (KHC) isn’t your conventional “start-up.”

Kraft Heinz was cobbled together as a merger of Kraft Food Group and Heinz in 2015.

Starting on day one, it was already the world’s fifth-largest food and beverage company.

Despite being a new company, Kraft Heinz has all the hallmarks of an ideal Berkshire Hathaway investment.

Buffett loves well-known, mainstream brands with simple business models and consistent earnings. And Kraft Heinz is a collection of iconic brands that all Americans recognize.

Eight of the company’s brands generate more than $1 billion in sales.

Kraft products alone account for 4-6% of every American grocery stores’ sales. The company has achieved #1 or #2 positions in 17 core categories.

Heinz has products with a leading market share in more than 50 countries.

Buffett already was the biggest shareholder in the old Kraft Foods Inc. However, Buffett grew unhappy with the direction of Kraft and criticized its acquisition of Cadbury. He began to reduce his stake.

In 2013, Brazil-based private equity giant 3G Capital approached Buffett with an opportunity to invest in Heinz. 3G Capital had been working with Heinz management on cleaning up its balance sheet and improving the efficiency of its operations.

Buffett purchased a 50% stake in Heinz, paying a 20% premium for the shares.

Fast forward to 2015, and both Buffett and 3G Capital saw the opportunity to combine the two iconic food brands of Heinz and Kraft into a global distribution powerhouse.

Kraft Heinz leapfrogged Coca-Cola to become the third-largest food and beverage company in North America behind PepsiCo and Nestle, boasting nearly $28 billion in sales in 2015.

Buffett invested $10 billion for a roughly 25% stake in the new Kraft Heinz. He is the second-largest shareholder, trailing only 3G Capital’s 51% controlling stake.

As a majority shareholder, 3G Capital is laser-focused on wringing out the greatest efficiency possible from the merger of Kraft and Heinz.

The “Oracle of Omaha” has referred to 3G Capital as a “perfect partner.”

In his 50th-anniversary shareholder letter in 2015, Buffett praised the Brazilian investment group in the highest terms:

“Two years ago, my friend, Jorge Paulo Lemann, asked Berkshire to join his 3G Capital group in the acquisition of Heinz. My affirmative response was a no-brainer: I knew immediately that this partnership would work well from both a personal and financial standpoint. And it most definitely has. We expect to partner with 3G in more activities. Sometimes our participation will only involve a financing role, as was the case in the recent acquisition of Tim Hortons by Burger King. Our favored arrangement, however, will usually be to link up as a permanent equity partner (who, in some cases, contributes to the financing of the deal as well). Whatever the structure, we feel good when working with Jorge Paulo.”

At the time of the merger, Kraft Heinz committed to trimming $1.5 billion in annual costs by the end of 2017. It is doing so by reducing the headcount, shutting down inefficient manufacturing facilities and implementing zero-based budgeting.

So far, Kraft Heinz has shuttered seven plants, with 2,600 employees, or 14% of its domestic factory employee base, losing their jobs.

As a result, the company generated about $865 million in cost savings in the first nine months of 2016 and $990 million since then. Analysts expect Kraft Heinz to exceed its original cost-cutting target by around $250 million by fiscal 2018.

Kraft Heinz is also focused on the international expansion of Kraft products. Kraft derives 98% of its sales from North America. In contrast, Heinz has a global footprint and derives 60% of its sales outside North America. Heinz sells ketchup and other brands in 200 countries. It holds the #1 or #2 market position in 50 countries. The potential here is tremendous.

In recent months, Wall Street has been abuzz over rumors of Berkshire Hathaway’s next big acquisition. Berkshire Hathaway is sitting on $85 billion in cash. Kraft Heinz itself has enough financial muscle to help fund a new $90 billion deal.

Just last month, 3G Capital and Berkshire Hathaway launched a bid for Anglo Dutch giant Unilever for $143 billion. Although the bid misfired, it does confirm the scope and scale of Kraft Heinz’s ambitions.

Many analysts are now betting that Mondelez International Inc. (MDLZ) is the most logical takeover target for Kraft Heinz. Mondelez was spun off from the old Kraft Foods, Inc. in 2012 to focus on international growth.

3G Capital’s turnaround of Kraft Heinz has been successful so far. Since going public in 2015, Kraft Heinz’s earnings beat consensus estimates by an average of 13.88%.

Kraft Heinz’s stock has also almost doubled the return of the S&P 500.

Trading at a trailing price-to-earnings (P/E) ratio of 33, Kraft Heinz stock is not cheap.

Still, Kraft Heinz is a stock that Buffett intends to hold forever.

And few investors would bet against the Brazilian private equity wonder boys at 3G Capital.

In case you missed it, I encourage you to read my e-letter from last week about the top pick of Charlie Munger, Warren Buffett’s trading partner

P.S. In my new monthly service, Smart Money Masters, I make recommendations based on the latest and best “smart money” picks just like this one. The current Smart Money Masters portfolio includes both Warren Buffett’s and George Soros’ top investment bet. Click this link to find out more.