Economic Cost of Hurricanes Harvey and Irma Estimated at $290 Billion 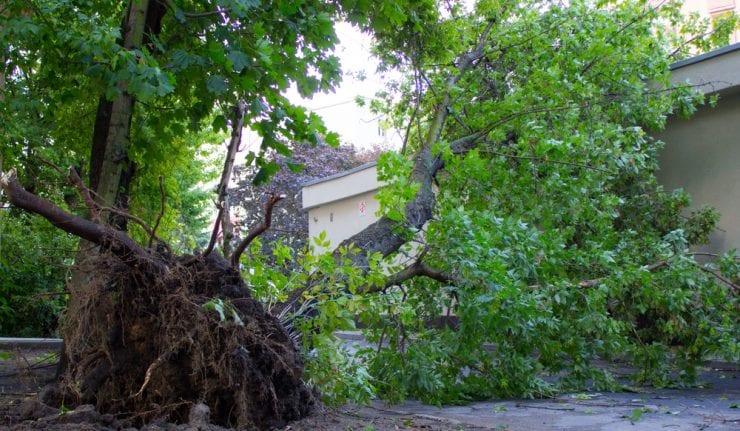 The combined economic cost of Hurricanes Harvey and Irma is expected to hit $290 billion and cause the most destructive and costly season of storms since record keeping began, according to AccuWeather.

The monster storms mark the first time that two Category 4 or higher hurricanes have struck the U.S. mainland in the same year. Still unknown is the ultimate track of Hurricane Jose, a Category 1 storm 700 miles east of Florida around midday Tuesday, Sept. 12, with maximum sustained winds of 75 miles per hour.

Fears remain that Jose could hit the United States to cause a triple-whammy of hurricane damage to the mainland and possibly the Bahamas remain, especially if it gains strength and loops westward by this weekend. So far, most computer models show Hurricane Jose remaining at sea and not moving onshore.

The much-feared direct hit to Miami failed to materialize once Hurricane Irma took a westward turn and moved north along the less populous west coast of Florida. Hurricane damage forecasters have raised concerns for decades about the potential devastation to lives and property if a Category 5 hurricane, such as Irma, struck Florida’s largest city with its full force.

Reinsurers that carry a significantly higher share of the risk in Florida than most other states due to its propensity to sustain storm damage actually rose in share price after Hurricane Irma caused less destruction than initially feared by forecasters. The share prices of big reinsurers such as Swiss Re (SREN: VX) and Munich Re (BIT: MUV2), the largest reinsurer in the world, rose, as did the shares of Florida’s largest residential property and casualty insurer, Universal Insurance Holdings Inc. (NYSE: UVE).

AccuWeather estimates that Hurricane Irma will cause around $100 million in economic damage, roughly 0.5 of a percentage point of the U.S. gross domestic product (GDP) of $19 trillion, compared to $190 billion from the less powerful Hurricane Harvey, which tore through Houston, America’s fourth largest city. The economic damage includes both insured and uninsured losses.

AIR Worldwide estimates that the insured losses in the United States and selected Caribbean islands from Hurricane Irma will hit $20-$40 billion. The catastrophic modeling company also pegged the insured losses from Hurricane Harvey’s winds and storm surge in Texas at $1.2-$2.3 billion but the estimate omits the impact of the torrential rain and related catastrophic flooding.

The avoidance of a direct hit with Hurricane Irma’s full force on a big city in Florida significantly reduced potential losses, especially since the storm was larger and sustained intensity for the longest time of any hurricane or typhoon since the “satellite era began,” said Dr. Joel Myers, AccuWeather’s founder, president and chairman.

Hurricane Irma showed “great staying power,” even after ripping through several islands in the Caribbean and striking the coast of Cuba, Myers said.

Such storms cause extremely hazardous conditions, including fallen trees, flying objects and downed power lines, which carry the potential for electrocution, broken window glass and damage to roofs and other structures. Storm surges can be another major threat.

The passage of Hurricane Irma, now a tropical depression dosing the middle of the country with rain, is being followed by wind that could damage structures and trees that withstood earlier wind and rain, but have been weakened since, Myers said.

Hurricane Irma caused damage from wind, flooding from heavy rain and damage from the sea in different places in Florida. Many locales more than 25-50 miles inland faced wind gusts of more than 100 miles per hour before the storm weakened.

“We estimated that Hurricane Harvey is to be the costliest weather disaster in U.S. history at $190 billion or one full percentage point of the GDP,” Myers said.

AccuWeather predicts damage from the two storms together amounts to 1.5 of a percentage point of the GDP, which will be about equal to the “natural growth of the economy” from mid-August through the end of the fourth quarter,” Myers added.

Economic costs are incurred by, but not limited to, the following:

Below is a chart the compares the costliest U.S. disasters through last year. 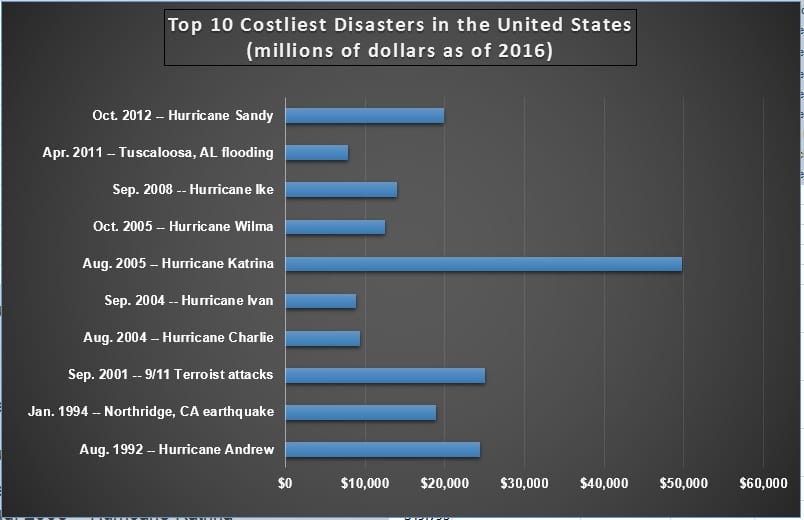 previous article
What if a Grand Slam Were Worth 100 Home Runs? — Mental Models in Investing
next article
VIP Alliance Weekly Update
share on:
Exclusive  The Most Dangerous Threat to Your Wealth Today